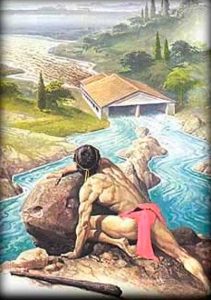 it seems that almost everyone I know has entered the LBP on a massive scale and is being hit with a huge force in order to open to the truth we’re about to bring out with our appearance as ascended masters. The town I live in – Cheb, Czechia, made headlines as our hospital is absolutely overcrowded with “patients”. My mom has been hit particularly hard today and was unable to walk. But that’s, of course, a blessing in disguise. That alone tells me that your newest predictions are spot on and the window for the Divine Intervention is fully opened now. It feels like being released from a lifetime of incarceration.

I very much appreciate your undying efforts that you bring daily with your great articles. My inbox and timeline on Facebook’s messenger basically consist of sending and sharing your articles with everyone, but most of my messages go unanswered. I had a few friends there that shared your articles back in 2014 but since then have deviated and begun with creating their rather disparate and ambiguous theories. It seems they fell prey to the dark ones, but it’s of little importance now.

I can easily see Facebook transforming into the UL Network and serving as an information hub for all the revelations that we shall bring out as the word travels at the speed of light on social platforms. The disbelief and shock will be palpable. The PAT group is about to receive millions of requests, ha.

thank you very much for this very uplifting news. I am happy to have validation from competent external observers like you how quickly now the people transform in the LBP due to the energetic barrage they receive from the source that then flows through my fields, body, and my enhanced global threefold flame of life. These source energies are then being transmitted in an appropriate diluted form for the people to receive and assimilate because if they get them in the pure form I receive them, their bodies will be burnt within a flash.

This process is now cardinal for all the changes which we then see externally on the earth, at the political and societal level, as I write from time to time. When the shift comes, there will be also an expansion of the overall consciousness of the people as I wrote already in July last year as my personal impression and experience these days tell me, sometimes in a poignant manner as was the case with my daughters yesterday, that all awakening humans are still not capable of seeing the forest from the trees, of discerning fully the truth from the lies. They still get lost big time in the maze of eons of darkness and deceit that has reigned on this planet and mired the minds of the people in a profound and unimaginably detrimental manner.

But we are now moving forward with giant steps and it is a joy to behold the results of our current creation. The message which the Elohim gave me 5 years ago still echoes in my mind:

“If you want to introduce successfully the UL on the earth you must first create the new scientists and humanity that will be capable of grasping it”.

This is precisely what I am doing now and I must admit, it is very strenuous for me, emotionally and physically, as the intensity of the source vibrations exceeds anything I have experienced so far.

If the people go in droves to the hospitals as you write because they are so severely hit by these waves, can you imagine the magnitude and intensity of the waves that originally flow through my body? It is extra-human and it is inhuman.

And please, do not forget that when I was in Austria last fall and winter, I was visiting Czechia at least 2-3 times each week to disseminate light codes and expand the city of light New Raetia over your country and Eastern Europe, of course with the help of such adamant light warriors like you and Iva. Czechia is the fulcrum of my plan to create the Panslavonic Commonwealth of free peoples in Eastern Europe as the prototype of the new 4D earths. It has a long tradition in that as the idea of Panslavism started from Prague more than a century ago, precisely at the time of the French Revolution 1848.

Anyway, since I am used to such extreme energy intensities, I am happy to receive them a few more days to prepare humanity for the shift. Then I hope I am gone out of here as I cannot fathom how I can continue living in this decrepit physical vessel any longer and continue downloading these gargantuan energies from the Prime Creator. I have now so many angels, AA, AM, and forces of light around me and they are holding the breath in awe at the gargantuan effort I am accomplishing every day to prepare humanity for the shift by transforming their energetic body-mind-spirit-system and also to fend off the numerous heinous last desperate attacks of the dark ones in form of psychotronic weapons.

“Most of the humans there on Earth are being influenced by something that is detrimental to the development of their consciousness. And right now, one thing we know for certain is true about humanity and life on Earth, and that is the truth that you need a higher level of consciousness, to bring all of you together so that you can become the harmonious collective that you are destined to be.”

This is the crux of humanity and this is what I am changing now on a global scale for all ascending mankind on the ground. And I am happy that the Arcturians have summoned a bigger alliance of forces of light to support me in this endeavour as the single Logos God in human gestalt. Amora, the other Logos God on earth, has a different mission now but she is essentially performing a profound healing of humanity on a global scale with the help of her guides and is thus supporting my mission of transforming mankind because any transformation of humanity must be accompanied by deep healing. We are now marching separately to accomplish ascension jointly:

“We are looking for assistance from other collectives in the non-physical realm, collectives who want to form an alliance to create a new energetic field that would be able to modulate all of the energies there on Earth so that you can have a purer experience of yourselves, of your thoughts, and of your emotions. This is a Herculean task, which is why we are looking for allies, those who are as interested as we are in helping all of you. ”

If this is a Herculean task for these civilisations in the 9th and higher dimensions, can you imagine what is the magnitude of my task here on the ground? By the way, the Elohim told me years ago that I embody the energies of the Elohim Hercules from the blue ray and this is obvious from my obligation to be on the earth to cleanse the Augean stables of mankind.

Let’s hope that this Herculean labour is now coming to an end.

thank you very much for your answer. I always held you in very high regard for everything that you accomplished and it’s truly breathtaking to think that you’ve been in this alone for the most part and that you even made our awakening possible. It is my understanding that most of the PAT experience is still a watered-down version of what you experience. I only did about eight years and I have had enough, lol. Once humanity finds out, they will probably break into tears in eternal gratitude. And I’m sure that the gratitude the Source holds for you is immeasurable.

It’s true that we come from very high frequencies and thus our perception of everything is very different from that of all other people. It’s crazy that the majority of humanity cannot discern for themselves the obvious blunder and deception in front of their eyes.

There’s a Czech saying – “You couldn’t see a barn if it was in front of you” to point out someone’s blindness. This perfectly fits for the human population. Despite all the undeniable evidence presented, it’s as if it never happened. So I reckon a big ass barn is about to manifest and humanity will have no other option but to see it. I even befriended a couple of neighbours in recent months as I live in a big apartment complex and tried to educate them but to no avail. They always flee and their fears run high.

This is indeed a great summary, Georgi. I was always struggling to convert my thoughts into words exactly as I wanted so I cannot wait until we can fully utilize our spiritual gifts.

Infinite love to you and swift transfiguration.

The Evidence Is Coming – The Cities of Light Are Descending

“All in dreams. Your light cities are no longer stationary. Now traveling earth 50 feet above sea level collecting souls. Saw your armada pass by and saluted you. I AM the Last man standing on earth as duty honor privilege to redeem all elections.“