Georgi, i saw a fleet of Lightships on January 2nd, even before I read the message you posted about First Contact. I have never in my life seen them like this or been able to clearly FEEL them all around me. Vegas was teeming with them that day. Also, it happened again Yesterday on January 10th. I will forward you one more email with yesterdays’ photos. These were taken right by my house and near my dog park.

I feel a LOT of anxiety in the air today (Jan 11th). I’m trying to just breathe and let it go but it just feels so intense. I just wish it would all implode already, not sure how much more I can stand. Also, my apathy is at an all time high. I just can’t seem to make myself care about hardly anything other than animals. I just ask myself, how can things continue on much longer without the bottom dropping out. It will be very interesting to see if anything happens before the Inauguration. 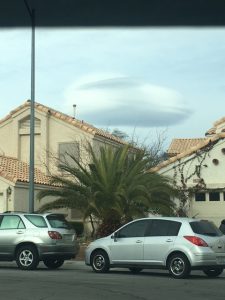 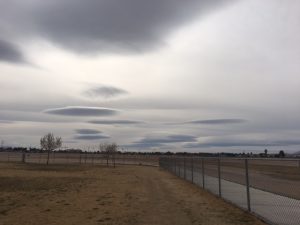 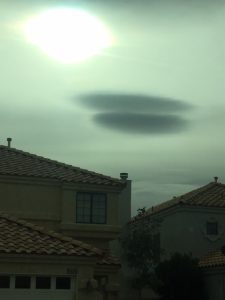 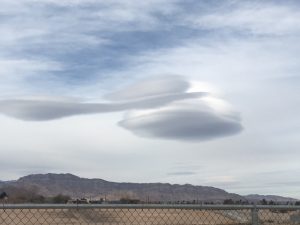 these are amazing pictures – there is no doubt that these lenticular clouds are scout spaceships. We have seen them also in the past here in the Vancouver area.

I can confirm the high intensity of the waves today and the inner tension and agitation that they create at the emotional and mental level. There is also a lot of anxiety being emanated from the collective coupled with unprecedented aggressiveness as if the dark ones have taken off their gloves and dropped the imposed political correctness and now expose their true heinous nature. One only needs to watch the live press conference of Trump today, the first in six months. The aggression in the room was so heavy and dense you couldn’t even cut the air in the room with a knife.

I woke up with such tension and stress from my vivid dreams this morning that I had to go immediately under the shower to wash them from my body. Since then I have the feeling that something huge and dramatic is about to happen any moment and am practically waiting for it the whole day. It will not be pleasant, but it will also trigger further developments that will be highly beneficial. It must always begin with a nasty story before it turns for the better as the law of immediate karma postulates.

The cabal MSM disseminated the forged report about the alleged sex orgies of Trump in Moscow in 2013 during Miss Universe Competition which he attended and was allegedly filmed by the KGB – “Trump’s Peegate” so to say. Now this fake story is blowing in the face of CNN, BuzzFeed and other dark fake outlets and they have already signed their death verdict. And the eternal cretin John McCain boasted to have delivered this fake report personally to Comey and the FBI. In fact the British con-man that compiled this garbage and pretended to have all this information from Russian sources could not even spell proper a single Russian name and institution and mixed the names of the politicians he mentioned as to pretend authenticity. How more stupid can the cabal act?

They must be so frustrated by their constant failures that the next big crime they will commit will lead to their total demise. The entire world is now laughing at the American press and political elite and, as Trump said it today at his press conference, the world no longer respects the USA – why should they?

This is the perfect psycho-mental mixture leading to collective insanity and collapse of the matrix and I see the latest developments very positively. So positively and optimistic that I even have no desire to comment on them but just enjoy the unfolding drama in a silent satisfaction. Everything we, the new prophets of humanity, have been saying for many years and has been published on this website, is now happening real time and with the exactly same inner soul dynamics and impeccable divine dialectics as being explained so extensively on our website. What more do we want? We are finally having our vindication while the spaceships of ascension are hovering over our heads and applaud us.

Here are the Lightships I saw yesterday. So this has happened twice since the beginning of the year. What strikes me is that i can FEEL them. Yesterday, I was feeling pretty down and I went to the dog park and looked up and all of them were there, like a floating city. I immediately felt excited and started crying and sending Love, and told them to come and get me.  I was very happy the rest of the day. But I felt extremely homesick too. Today, I feel major anxiety and find myself wishing I could see them again. I’m trying to relax and be patient but I feel like I’m going to bust at the seams. Now that I’ve seen them twice in one week, I feel it has completely made everything here look that much more shitty and made me long to leave that much more. 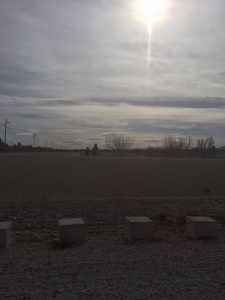 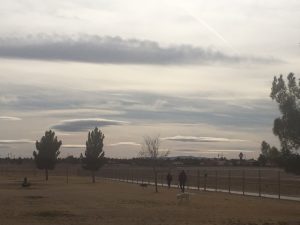 In looking at yesterdays pics, I just wanted to add that these do not do it any justice. I mean the shadowing was so different than any of the other clouds and they were spaced out perfectly just like a floating city…plus, the feeling…other people around me were not even looking at the sky and I couldn’t stop.

You are right, Georgi. It is all coming unraveled now. I get overwhelmed from the pace of it all as one scandal barely simmers down before the next ridiculous thing becomes all the rage for 15 minutes. It almost gives me a sense of motion sickness. I’m going to lay down and try to still myself. It feels like my brain is hyperactive, just looking for any sign of the fatal blow, but truthfully it doesn’t matter because I’ll hear of it when I’m supposed to. I realized today that I have never felt truly comfortable on this earth and the realization of that made me feel so very weary. I thought to myself, how could anyone ever be comfortable here when literally everything around us is an assault against Life. The feeling is that your failure is desired at every moment so that you either have to pay for something, or if you can no longer pay for things, you need to hurry up and die. It’s so sick. The level of sickness sunk in even further for awhile today but perhaps, that’s realizing the darkest of it just before the dawn breaks.

I feel you are also right that something huge and dramatic is about to happen at any moment. I think that’s why I have felt on edge yesterday and today.