The Energetic Fallout from the New Moon Portal on July 16, 2015

As you all must have felt it, the new moon portal that dominated the energetic happenings for the last five days, beginning July 13th, was a new most powerful ID shift to higher dimensions. It brought about all the ingredients we know from previous powerful portals – massive descent of source energies leading to rapid interdimensional shifts and a lot of pain and LBP-related symptoms for us, as some of you have reported in your emails to me. Here is an energy report from Laurie from Vietnam, which should be representative for what most of you must have experienced this week:

Just a short note. On Monday evening I started to feel tingly and slightly unwell, then by Tuesday I could still eat some food, but felt this getting much worse and was not able to even eat dinner.  Wednesday and Thursday were brutal; every single major joint in my body ached so bad that I could not move for these two who days – let alone eat food, but I had to keep myself hydrated – my head and eyes were so numbingly sore that I had to use some ice packs and cold packs on them, which was the only thing that gave them some relief. I could barely walk.

Today is Friday and while I feel somewhat better, I had to take myself to my acupuncturist to get some acupuncture on my lower back and neck up into my head, which was so achy and sore that it hurt to do anything.  I think this was due to lying down so long, so it has helped me a little – Thankfully. But while my doctor was feeling where the pain was in my head, she mentioned my gall bladder, which, when she pressed on this area was unbearably sore.

The energy streaming in is unrelenting, and my third eye seems to have taken on a whole new dimension. If I wake up in a new reality – soon, I hope – I will not be surprised. I had this vision of new software download on Tuesday evening, it was so painful.  The tones coming into my ears and head are making it so sensitive, even today.

I hope you are faring better.

Much love and light to you and Carla,

In fact, today, July 18th, it got even worse – another massive descent of source energies accompanied by a cc-wave and severe headache for both of us since early morning. This energy surge was preceded by a powerful ID shift yesterday July 17th, which some of you have experienced very strongly. Here is another report:

I have to tell you what just happened to me, I think I have let my fantasies and my mind run away with me today. I have been in a day dreaming state of mind all day today, just sitting and visualising fixing up my house like I did in last night’s dream, fixing the leaky gutters, the paving and gardens etc, and I’m not sure whether I dozed off or not, but I found myself standing next to you, and you looked like Zeus.

You were facing forward with your eyes closed and we all had our arms out with palms facing a bubble in the centre of us, there were other people, but I did not see their faces. The bubble was quite large, larger than a beach ball, but not as large as those bubble things people put themselves into and roll down the hills.  The bubble was smooth, but made out of jelly, or looked like chop fat, kind of hazy, so I couldn’t see through it, but there was something inside, I think it was the earth but not sure.  There was some kind of stand that held the bubble at the top and the bottom.

Next the view changed and I was looking up at you from the vicinity of the bubble, you still looked like Zeus and hadn’t moved but you were large and towered above the bubble. Above our heads were what looked like clouds, not far away from our heads though, from the clouds came down exactly looking like a tornado, but made out of chop fat, that came down to the bubble.

I got the living light, not your soul or your light body, and not my soul or my light body, but “THE light”.  I was afraid to open my eyes, for a moment, I was sure I was going to find myself outside of the bubble, standing next to you, and I got really hot and sweaty, and then it was over.

Snapped me out of my day dreaming state of mind, I don’t have an explanation really, although now I am worried if I have had a hand in creating this world, or were we creating a new world, or if it is possible that my true self is outside of the bubble, whilst some of my consciousness is here on earth, inside a bubble reality, thinking this is reality.

I can, tell you, that you have been on my mind lately, specifically your new Universal Law and me not understanding it completely.  Do you look like Zeus??

And this is how we experienced the ascension energies yesterday, which was by all means a very special day and could as well have been a major collective ascension test run for the PAT prior to our final move to New Lemuria. We had the impression that we were ascending rapidly to higher and higher timelines and taking the whole city of Vancouver with us like the mythological Atlas who carries the earth’s globe on his shoulders: 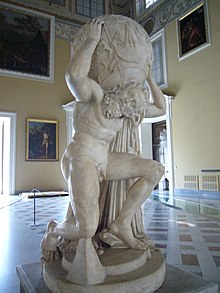 this is an amazing vision and yesterday was a special day. We had to spend it in Vancouver city, West Vancouver and Downtown as we had some chores to do there. At some point in time we were in a Chinese bubble-tea room sitting in comfortable sofas and drinking our cold tea in the heat when we were simply taken away and were asleep, by “we” I mean Carla and myself. When we woke up, we had no idea what had happened but we were not in this reality anymore. The whole day was very dreamy and nothing occurred as we expected it. We had absolutely no control over the events as if we were pushed by an invisible hand to and fro.

I think that we had a powerful ascension shift yesterday as the clouds in the sun set were here crimson red and purple with incredible intensity and for the first time like that this year. Last year we had several such skies.

As Zeus was a mythical figure, nobody knows how he really looked like but from his pictures on Greek vases and sculptures he looks very much like a Greek man and I also look like the Greek people as depicted at that time.

What is true is that I have opened the heart chakras of many people and PAT members at different times and have helped them progress in the LBP. What you have seen may as well have been another ascension test run of the PAT as this is what also happened yesterday among many other things.

Of course I may try to invent some spectacular news or pseudo-scientific hypotheses as most self-proclaimed prophets of the New Age are currently doing in total ignorance as to what is really happening – things like X-wave, a new Nibiru, etc, only to make themselves important. But guys, we know it better, we are in the middle of our move to New Lemuria and we are now retrieving our 18 bodies and this process was never meant to be easy:

Have you ever had the dream where you are running and not getting anywhere?  That is my feeling today, July 18th. I can barely move, The hips hurt like hell, breathing labored. It feels like my soul is being sucked away from me.

Could this be the eighteen bodies being planted in new Lemuria? or more cleaning? I am sure others are writing in. People around me are commenting how weird this week has been.

Hope you and Carla are doing Okay. I can hardly write. Going to lay down. Talk later.

Love from the Hills of Arkansas

this is precisely how Carla and I feel today and on top of it a severe headache due to a cc-wave. I have no idea exactly what we are doing but the new moon portal on July 16th was very powerful and still active and we had another huge ID shift to higher dimensions yesterday. It must also be connected to the move of our 18 bodies to New Lemuria as I have a plugged nose and phlegm (sinusitis) with sneezing since several days and these symptoms always indicate a massive transformation of the physical body….

And all these powerful energetic events happen amidst the proverbial lull before the storm at the global stage, where physical exhaustion now leads to a swift and easy dismantling of the elite from power and the introduction of the Universal Law. The higher the temperatures, and the more listless the incarnated human beings, the less resistance they will show to the upcoming changes. They will simply succumb to our divine intervention as the New Logos Gods and ascended masters – the bearers of the Christed Unity Consciousness – and will follow us without the usual mental blockages and caveats entirely to their benefit.