In my article on the kill list of Obama I wrote two days ago:

“Finally the US mainstream media Are Beginning to Awaken and to ask their President the tough questions, they should have asked much earlier if one assumes that they are an independent corrective of the executive power as they should be. As we all know, they are not, as they are in the hands of a few Reptilian and/or cloned moguls, who are in cahoot with the criminal US politicians on power. Or as a Bulgarian saying says:” One crow never picks the eyes of another“.

This appears to be a very prophetic statement given the further developments on this issue in the mass media. As I expected, the flagships of the US press, the Washington Post and the New Your Times are now coming increasingly under pressure from all sides for having collaborated with the mass murderer Obama and his criminal administration in hiding important truths and facts from the US citizens, thus neglecting their primary duty to be a corrective of the executive power and protectors of the US constitution guaranteeing the freedom of speech, personal opinion and expression. This behaviour is typical for all dictatorship countries, to which the USA has already converted in a most despicable, clandestine manner as discussed in my latest article as of yesterday night.

The coming era of revelations will be characterized by a full reciprocity of all events. Not only the perpetrators, such as the dark elite on power, will be made accountable for their crimes, but also all their helpers and servants in the mass media, who have contributed to these crimes by neglecting their proclaimed purpose of existence, namely to establish an effective system of checks and balances to the inherent propensity for corruption of all humans on power, which is as old a theme as the despicable history of the current debased human civilisation, which we, the PAT, will transform to an ethical and loving transgalactic civilisation in the course of this year. This will be also a huge embarrassment for all light workers who now officially support Obama on their websites.

Below I am publishing the latest article in The Guardian, which critically reassesses the complicity of the Washington Post and the New Your Times in hiding the existence of Saudi drone base, from where US citizens were killed unlawfully by Obama and the US government in a most heinous manner.

___________________________________
US newspapers accused of complicity as drone report reopens security debate.
New York Times and Washington Post knew about secret drone base in Saudi Arabia but agreed not to disclose it to the public.
by Karen McVeigh, The Guardian, February 7, 2013
http://www.guardian.co.uk/media/2013/feb/06/us-newspapers-accused-complicity-drone 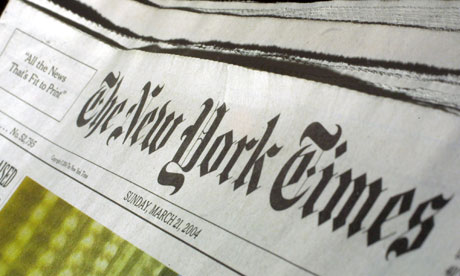 The New York Times was accused of failing in its responsibility to the public by not reporting the location of the secret base. Photograph: Roger Tooth for the Guardian

US news organisations are facing accusations of complicity after it emerged that they bowed to pressure from the Obama administration not to disclose the existence of a secret drone base in Saudi Arabia despite knowing about it for a year.

Amid renewed scrutiny over the Obama administration’s secrecy over its targeted killing programme, media analysts and national security experts said the revelation that some newspapers had co-operated over the drone base had reopened the debate over the balance between freedom of information and national security.

On Tuesday, following Monday’s disclosure by NBC of a leaked Justice Department white paper on the case for its controversial targeted killing programme, the Washington Post revealed it had previously refrained from publishing the base’s location at the behest of the Obama administration over national security concerns.

The New York Times followed with its own story on the drone programme on Wednesday, and an op-ed explaining why it felt the time to publish was now.

One expert described the initial decision not to publish the base’s location as “shameful and craven”.

Dr Jack Lule, a professor of journalism and communication at Lehigh University in Pennsylvania, said that the national security implications did not merit holding on to the story.

“The decision not to publish is a shameful one. The national security standard has to be very high, perhaps imminent danger,” he said. “The fact that we are even having a conversation about whether it was a national security issue should have sent alarm bells off to the editors. I think the real reason was that the administration did not want to embarrass the Saudis – and for the US news media to be complicit in that is craven.”

The Obama administration has resisted any effort to open up its targeted killing programme to public scrutiny. The White House legal advice on the assassinations program, including the killing of a US citizen, Anwar al-Awlaki, has been withheld from the public and Congress, despite repeated requests to make it public.

The New York Times is attempting to obtain this memo though the courts, and Margaret Sullivan, the Times’s public editor, used this argument in her piece on Wednesday, which said that the Times was right, at last, to publish details of the Saudi drone base.

However, Lule said that in not publishing the location of the base when it had the information, the newspaper had failed in its responsibility to the public.

Lule said: “We have two partners’ participation in the secrecy of the drone programme: the government and the news media. If we are looking to open it up to scrutiny, where do we go?”

“It happened at the top ranks of the media, too. We look to digital media, but they do not have the contacts and the resources to look at this. They should have been leading the pack in calling for less secrecy. For them to give up that post is terrible.”

Jane Kirtley, a professor of media ethics and law at the University of Minnesota, said the Washington Post had a long history of seeking input from government on stories which they felt may have security implications. She cited a column the Post’s former editor Ben Bradlee, written in the 1990s about this issue, which generated a lot of criticism.

“The argument was: what is wrong with going to the government to find out the possible impact so that we can make an informed decision? That is the argument they have made in the past.”

Kirtley said her own view as a lawyer would be: “The default position is to publish.”

Part of the problem, she said, was that the term “national security” could be used as a cover for embarrassing revelations, or information the government does not want in the public domain.

“How to judge national security is the real conundrum. News organisations, as a rule, think about the consequences of their stories. The problem with dealing with national security is that it is so amorphous. Journalists are trained to be sceptical of these types of assertions. The repercussions are not always obvious, compared to, for instance, movement of ground troops in a war zone.

“The comments on the Washington Post story reflect that dichotomy.”

Kirtley said that in such cases it is vital for a news organisation to explain to its readers why the decision was made.

“To public perception, it begins to appear that those decisions were made not for national security reasons but to provide cover for the administration. That is the tightrope that news organisations walk in these situations.

“The whole brouhaha has become so complex over what the implications are for John Brennan, and whether the Post has done this for political reasons. That is why it’s is so important to explain to their readers why a decision was made.”

While the publication of the white paper itself has brought renewed scrutiny to the Obama administration’s insistence on secrecy, Stephen Vladeck, a professor of law at American University who specialises in national security issues, said there was an irony.

“We have a Freedom of Information Act. And, unlike Britain, we have no Official Secrets Act. But in the last decade we see less and less release of national security information.

“The aftermath of 9/11 has provided a very powerful counter-argument against freedom of information. My suspicion is that, out of western democracies, the US is at the far end of the secrecy spectrum”

Vladeck said that the US press, which has been responsible for some of the most important national security stories in recent years, including George W Bush’s wire-tapping, the abuses at Abu Ghraib, and the existence of the CIA “black site” secret interrogation programme, had shown it could be complicit with the administrations secrecy and pushing against secrecy.

“Every institution in this story has a responsibility. Our courts have been increasingly deferential to the government in FOIA actions – for instance, in the OIC memo about Awlaki.”

Vladeck said that the issue would generate debate but added: “Whether it will generate anything more than debate is up to Congress.”