The long-anticipated message of Pallas Athene, transmitted to us by Gabriele on July 7th, triggered the last most intense phase of the Shift and our ascension. She had already told us that her messages carry all the codes that have the power to trigger the planetary ascension as she speaks in the name of the Karmic Board and all the ascended masters from the White Brotherhood.

However, in order for these codes to become active, they must be fully embraced and anchored by the ground crew of the light warriors of the first and last hour, the PAT, as this creation is still determined by our free will.

For this reason I was simultaneously channelled and inspired to expand on Pallas Athene’s message and present a fuller picture of the current energetic state of the Shift and our ascension.

My energetic report on July 9th, on the eve of the powerful new moon portal, opened widely the gateway to heaven. Even Poseidon showed up to announce the upcoming terraforming events of the shift, the worst consequences of which I intend to curtail with my early ascension enabling mass awakenings through the introduction of the new theory of the Universal Law.

The Arcturians, with whom I am in constant telepathic contact due to the fact that I have a 9D incarnation in this civilisation, then followed the tradition of confirming pivotal announcements and decisions on my part by giving me immediately a message on July 11. They announced their support for this most favourable ascension scenario which I advocate for more than 2 decades:

“We are very curious about the next steps you are going to take as a human collective. We can see many positive possibilities for you as you ride the wave of positive energies that have been coming in to support you at this time. We have noticed that more and more people are stepping up to be a part of a positive future for humanity, in spite of all of the predictions that make it seem like your future is outside of your control. And we know that those of you who receive these messages are a big enough group to make a difference there on Earth and to bring so many more people with you on a positive timeline, one that includes baby steps forward, without cataclysms, without massive numbers of deaths.“

Many people who have read my energy report told me that they became very tired from the intensity and high vibrations of the text and had to lie down and sleep as to integrate the codes of ascension. They felt the immense power coming from this treatise channelled by the Karmic Board and the White Brotherhood, including Melchizedek, which points to the exponentially growing energetic harmonisation of all ascension candidates in preparation for the shift.

Our young PAT member from Germany Jonas Be who, together with Pepe and Travis, is the most advanced crystalline child in the ascension process on the earth, sent me a beautiful and emphatic letter where he expresses one more time the clarity and inner conviction of all ascension candidates that we are on the cusp of entering heaven on earth.

It is this prevailing feeling of ecstasy which many of us experience these days that stands in glaring contrast to the bleakness and darkness of the ongoing fraudulent lockdown worldwide, on the backdrop of incessant attempts of the deceptive ruling dark cabal to further enslave humanity under false statements and pretexts. However, this will not happen as there will be Divine Intervention through me as the first ascended master who will change the course of human history forever.

With my article at the new moon portal, a huge frequency leap was accomplished and humanity was flooded irreversibly with the source energies of truth so that no lies can exist anymore on this planet. This massive blast from the Source was also confirmed by the appearance of a huge coronal hole in the sun on July 10/11 as our sun is merely a portal for the Central Sun. 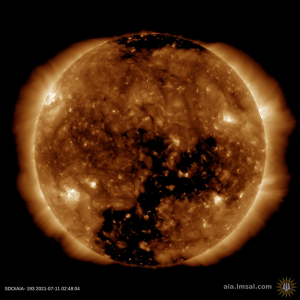 The accompanying waves of cleansing and ascension which flowed through my fields these last several days were off the scale and my awareness of being a mere avatar in this surreal reality has never been more poignant.

This night I descended with the entire humanity into purgatory.

I will spare you the details but you can reckon from now on that no lies can exist on this planet anymore and the avalanche of revelations and change will begin to roll over humanity. Now that Italy luckily won the EU football championship, the elation of this otherwise totally enslaved nation will propel them into the shift as this country is the alpha and omega of all incarnation experiments on the Earth. Italy is destined to lead the ascension round dance of humanity with the manifestations of the cities of light in Liguria and this is entirely the result of my gargantuan development light work for the last 3 years in this spiritually backward country that would have never been able to do it on its own.

What I experienced this night was the blank human horror when all human darkness and all their lies that have dominated their lives for eons of time came to the surface and created such an abominable field of negativity that no human soul could deny it. At the same time, the stubborn intransigence of the people to acknowledge their lies and deceptions was so despicably overwhelming that Dante’s Purgatory is a pale comparison of what happened last night with all human souls in the astral plane. This massive purging will now begin to trickle down into this 3D matrix and we will begin to see its rapid collapse.

I could not escape this evil environment of human purgatory the whole night even when I got up to go to the toilet. It was pure hell although I was a detached observer of what was happening with all human souls that were so massively confronted with their evilness and darkness. Words cannot express the abomination of these energetic revelations at the astral planes when the threefold flame of life, the seat of the soul in the human body, was activated this night.

Read here: The Pathway to Freedom: How Humans Will Change as Energetic Systems During the Upcoming Global Shift

In order to save me further negative impressions, my soul deleted most of the details I experienced in this lucid dream state. However, I remember several encounters with some people who are close to me and who recently hurt me a lot with their callousness and outright cruelty, while blatantly lying to me. I confronted them with their behaviour and wanted them to tell me the truth and they were unable to look me in the eyes and began to roll their eyes dilatated with the naked fear of their enhanced parasympathetic nervous system squinting in all directions. They were so embarrassed and ill-at-ease by the truth with which I confronted them, but they could do nothing to avoid it and were turning round like slippery fish.

Words cannot describe this gruesome situation in the astral plane, with which I was confronted this night in order to be prepared for what to expect in the coming days and to inform you in due time. After all, I am the one who must always descend into Hades and neutralize the huge swaths of human darkness on this planet as the captain of the PAT.

This is however the last time I do it as the Shift and my ascension are now knocking on heaven’s door.