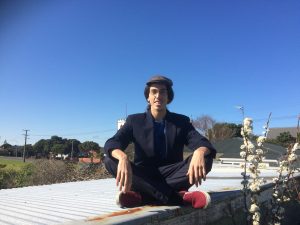 A Short Introduction of Elliot from New Zealand

Elliot is a young crystalline child from New Zealand who first contacted me in 2015 and since then only a few times, but he seems to be carefully reading our website and studying the new scientific theory and gnosis of the Universal Law.

“Hey Georgi, met you and Carla in dream time last night. I drove to your place, and you got into my car and we hugged and hung out for a bit. . It was amazing. I was very new in this sort of experience and couldn’t really speak. The feeling was beautiful, very blissful and electric, much love and joy.  After a while, the connection cut out and I was back in my meat-bag body. My bedroom was filled with light-beings, and I just lay for a while soaking in the sweet freedom and harmony.”

Today Elliot wrote to me and shared his experiences with the propagation of the holistic world view of the Universal Law. He has grasped very well not only the essence of the new theory but also how to approach the now rapidly awakening scientists and scientifically thinking people. Therefore, I decided to publish our correspondence as it shows the way how the breakthrough of the Universal Law will happen this year in a very natural way.

Elliot embodies the prototype of the new young scientists and ingenious inventors who will very soon receive massive inspirations from their souls and the I AM Presence, with which they have come to this earth as crystalline children and will become the natural leaders and wayshowers of humanity while we, the indigo generation and first ascended masters, will retreat in the higher dimensions after job superbly done. We will continue to oversee the evolution of humanity without physically appearing on the ascended higher 4D – lower 5D worlds of still existing material forms:

I have deeply agreed with nearly everything you’ve said since the new year. My experience of the ascension is like this:

The old matrix which once felt like a constant menace all around, while I was a bubble, I now feel in my body as the trapped energies of the collective, while most of my energy ascends rapidly. The external feels like warm, infinite unity.

Driving up the country today (NZ), it looked like a heavenly world or perhaps ancient Greece in its prime. Rolling hills of beautiful forest and green grass. Clouds and sun intermingling, rays falling on winding streams, stands of European trees spotting the valleys, native here and there. Like the painting ‘the school of Plato’s if you’ve ever seen it. A sense of infinity given by each unique view.

The damage was visible sometimes and some human places are very drab,

But the thing is I drove this way three months ago and forty percent or so seemed of a lower descending vibe. Now nearly all feels like a new world.

Recent conversations with my father and cousin were very surprising. Both are lifelong agnostics, science guys. Yet I was able to get through to each of them, to different extents, about the nature of reality as energy=consciousness. Using the concepts I learned from the Universal Law. It was very unexpected. It is like.. because I have been an atheist science guy in my teens, I know how they think and feel, and I’m able to tailor my explanation to them.

The Universal Law is like an infinitely useful logic key, and since I truly studied it recently I seem to have been telepathically communicating a tailored understanding to various parts of the collective. At least that’s my guess for the experience. Both with the direct conversations and telepathic ones, I seem to overlap their energy and minds onto my energy system and experience their doubts, resistance, and realisations as if talking to myself. It is new for me to experience this so clearly. In particular, my much sharper mental understanding of the Universal Law seems to allow much more precise and potent communication than just my unity energy before.

Apologies I have written a lot! I know you’re busy so I hope it’s useful. Lastly, I will echo some PAT members (Jerry?) and say some blocks remain but soon it’s off to the races. Balling off the chain. After years of energetic asphyxiating and anxiety, there is very little left and a growing sense of thunderous power and divine capacity. I could say a lot more but have written enough now. I think much of the collective is ascending without realising it, and the PATs that are coming into their true selves hold the keys to many groups and ah, particular mental concept chains of the matrix, like empiricism.

Lots of love George, it’s been so amazing learning the Universal Law. We’re doing it.

I love your letter and your excellent explanations of how you propagate the Universal Law, you could have written much more and I can publish it. I will also publish it now but have to find out how.

What you describe is how the breakthrough of the UL and its new Axiomatics as the foundation of the new holistic world view of the ascending humanity will happen from within and without. All the people are evolving rapidly now and more and more in a visible manner through the activation of the threefold flame of life and the descent of the soul in the human bodies of the ascending candidates as I AM Presence. This process is so powerful and is unfortunately very little understood in its transformative energetic power.

What we now observe is the birth of the new enlightened, multidimensional homo sapiens. It is happening before our eyes and I am thankful that you have depicted this metamorphosis so skillfully. You have done it on the background of the renewal of nature as the expression of the new earth. You are in advantage of being in NZ where nature has not been that much damaged as is the case here in Europe or even in North America and you were able to see the rebirth of nature and Gaia that is indeed now taking place at an amazing speed in front of our eyes. I can also observe it here at the Mediterranean coast in Italy too, though more as an intuitive vision with the 3rd eye and not so much as visible changes.

The new scientific theory and Gnosis of the UL can at best be relayed from a pure scientific, methodological point of view and you have precisely chosen this approach. I have always advocated that the scientists, I am thinking here predominantly of the young scientists as crystalline children, will surely grasp the new scientific theory of the UL easier and quicker than all the new agers who are orphans in science and display a very rudimentary abstract intelligence. That is why I have given up on this tiny group of half-awakened intellectual imbeciles, as they will never be the new spiritual leaders of humanity with such reduced mental and also emotional abilities. This is for me one of the most serious issues of the awakening humanity and I have discussed it on many occasions from various angles.

Essentially, the breakthrough of the UL will come from young awakened, enlightened individuals like you who have embraced the scientific approach. Your target group will be all the scientists, young and old, who need to awaken and this will happen this year with a breathtaking speed – from New Zealand to Europe, from Europe to North America, from Russia to China, also encompassing the entire Southern Hemisphere.

It will be one global conflagration of Aha-experiences of the masses when the people begin to grasp the basic cognitive tenets of the UL and why all our human perception and knowledge is derived from the Primary Term of our Consciousness, which can be equated with the Source, Godhead, All-That-Is, you name it. This is the Principle of Last Equivalence of all human words for the Primary Term of our Consciousness as clearly explained in the Axiomatics.

I can only advise you, continue in this direction, do not hesitate to enter in conversation with all the scientists you come across and even seek the contact with them. Very soon you will stay in front of hundreds and thousands of scientists and other academicians and explain to them what is at stake and they will listen to you very carefully and absorb your words.

I did this in 1997 – 1999 in Europe and initially, I had great success, especially in Bulgaria, before the dark ones noticed the danger coming from me and my discovery and totally blocked me. Now, these entities are gone and all doors are open for us to enlighten the people. That is why we have incarnated at this auspicious time – to teach the people and help them get rid of their chains of balls, their mental and intellectual shackles, and become free-thinking individuals.

What very few people have understood, the UL is the free ticket of humanity to their liberation and full freedom as multidimensional personalities.

PS: Here is a publication with an illustration of the “School of Athene” (actually the school of Plato as you write), which announces the anchoring of the new spiritual paradigm in Rome and Italy in November 2018 by us. It will be the new energetic foundation of the new Renaissance of unlimited creativity that the new humans, first and foremost young crystalline children like you will embrace immediately after the shift this year. I do not think that it was a coincidence that you choose this painting from Raphael, which praises the Antique Scholars and Gnostics whose ideas I revived with the New Human Gnosis of the Universal Law.

Our Lightwork in Rome – A New Spiritual Paradigm Creates the Opening

I will check it out now Georgi, thanks. Awesome! I’m happy to hear my thoughts were useful as I’ve really been having a massive holistic expansion of awareness and intellect in the last six months especially. Many insights into the matrix, the ascension candidates, etc. I still feel limited by my energy system, and need to improve my understanding of UL too.

I’ll write a more detailed report for you about the collectives I have been observing and some ideas on how they can be reached after the equinox, sometime in the next few days anyway.

It was inspiring and interesting you mentioned seeing me teaching auditoriums of scientists the UL. I have recently been imagining starting a YouTube and sharing there, and I know it has great potential. I know I can reach people, somehow I understand psychically where they are stuck and what will work. I’ll get into that more in the report.

These days are so strange. There is still quite remarkable pain at times, also anxiety, mainly appearing along the blocks in my system. The new energies are so strong though. So real. I can see how after my process is more unlocked, a matter of days perhaps, or weeks, anxiety and old energies will be rendered pretty much powerless as the continual bliss will be so reliable. Already this is mostly the case but it shows how it will keep accelerating from now exponentially.