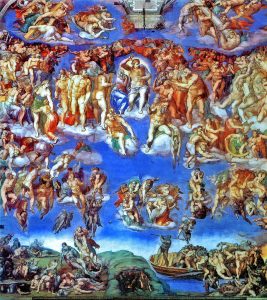 This is the time of the unvarnished truth, and nobody has said it won’t be painful. All the vices and dark features of the Germans, and of the rest of humanity, which rumi no kami (former Shinzhi Rumi, a German PAT member), has so brilliantly captured in this essay – and it requires a lot of courage to do that – have the function to wake up the people independently of their emotional reaction. Every means is allowed and useful to stir the people from their perennial slumber in order to recognize their dark vicious sides and overcome them if they want to ascend.

Their emotional reaction is irrelevant from the higher vantage point of view of our highly evolved souls and in the full knowledge that human emotions are only energetic means to the ultimate insight – that humans are immortal multidimensional beings, not Germans, and not Schweinehunde (pigdogs), the way they behave now and as described by rumi below. The sooner the people realize this undeniable fact, the quicker they will be lifted from their self-afflicted hell, called Germany, or the old earth, which has been infested by the dark energies of treason and betrayal since the time of Atlantis, the most vicious karmic heritage on this planet, which we eliminated last March (March 28, 2020), a year ago.

And this is the most promising sign that with the anniversary of this liberation, humanity will be transformed once and for all during the Shift and the full activation of the soul catharsis so that it is ready to be confronted with the ultimate truth of the upcoming revelations: Humans have been slaves all the time and behave like despicable slaves oppressed by heinous evil masters since time immemorial and definitely since the time of Atlantis, of which Germany and Great Britain in Europe and the USA in North America are the ultimate evil modern heirs. And not to forget the Vatican, which we already transformed into the light. Now these nations have to follow…

Dear Yuri, (Yuri is the Russian name for George)

I fully agree with your latest assessment re: the “German condition.”

As a native German, I am most intimately connected to this collective-soul-group’s intricacy.

The brutality of the current energetic onslaught reconfirms that this country and its original inhabitants are a long shot from natural balance and unbiased self-recognition.

To put it bluntly, they are full of shit.

Every time I’m outside Germany, I feel great.

Every time I’m back in Germany, I feel like shit.

In my journeys across the world, I have never met a people as despicable, hypocritical, neurotic, disgusting and self-righteous as the Germans.

Thanks to the “refugee crisis” co-created by Germany, I have met so many warm-hearted people from the Near East that my joke-called-life among Germans has become a bit tolerable.

These foreigners noted very quickly that something is seriously wrong with the locals, and I advised them to use their own networks to support each other because Germans are not likely to help even their compatriots.

The global shakedown has made leaving this land more challenging.

I am watching my window of opportunity to make my move.

Staying is no option, I’d rather drop dead on the spot than wake up in Teutonia again.

The most prominent theme burning in my field is collective self-hatred.

This self-hatred, coupled with other complex self-limiting energy patterns, has been coming up time and time again over the years.

It ain’t letting up, because these people don’t wanna let it go.

They reject their ancestors, their roots, their identity, their past, their heritage, their true nature.

They hate, attack, slander, ignore, deny any German who openly acknowledges all of the above.

This is not about political correctness, but about embracing truth in all its facets.

You cannot cherry-pick who you are, you gotta eat the full cake.

These people are most stubborn in denying themselves sanity and reason.

These people are most willing to give up their freedoms and rights.

These people are most satisfied to let authorities take control over their lives.

A German is only at ease when he feels safe and secure.

And he is willing to sacrifice anything and anyone for that.

The ongoing Corona-tyranny says it all.

What is happening in Germany, is a repeat of fear-driven reactions which led to the rise of Nazism and Communism in Germany.

Germans are outraged and united in their disdain and disbelief in how their compatriots empowered the former Third Reich and former East Germany.

You people are backing the Corona-regime big time, why is that different?

Their reaction will most likely not be reasonable, but vicious.

I have learned to hate this country and these people.

I tried loving them, having compassion and understanding.

They will rat you out to the authorities.

They will attack you for not wearing a mask.

They will ignore you for talking sense.

They will deny you services in stores.

They will deny you public transport.

They will deny you work.

They will deny you friendship.

They will deny you humanity.

They will deny your human and civil rights.

In their eyes, they are doing the right thing.

In their eyes, they perceive you as a threat.

A threat to public health.

A threat to public order.

A threat to themselves.

Never rock the boat in Germany.

Try it, and he will show his true face.

Under his polished surface lurks a hideous monster.

A fear-sculpted control-construct ready to take it out on you.

He will try to put you down, to force you back in line.

He will be applauding when the cops take you away.

He will be content when you are out of his sight.

He will be content when you are behind bars.

He will be content when you are silent forever.

What matters to him, is his bubble, his status quo.

No matter the cost and consequences.

These people are disconnected from their truth.

These people are disconnected from their hearts

These people are disconnected from their true selves.

These people are disconnected from Source.

These people cannot be “helped.”

They will turn on you.

They will turn you in.

They will lock you up.

The system is ruthless in weeding out opposition.

Why were the Nazis and Communists so effective?

Why was there massive public support for them?

Why was there no meaningful opposition?

Why are there no widespread whistleblowers?

Granted, public resistance against the lockdown in Germany is getting more vocal.

Granted, even medical/legal experts in Germany are openly questioning the regime.

Maybe the bulwark is finally cracking up.

Germany is the dark heart of the Old Continent.

German is the bully of the European Union.

Germany is one of the most low-vibrating countries in Europe.

The Germans are one of the most dumbed-down peoples in Europe.

I challenge any German to prove me wrong.

I know the likes of you.

I know how you always smile.

I know how you always pretend.

I know how you always listen.

I know how you take inner notes.

I know how you talk behind backs.

I know how you lie through your teeth.

I know how you spy on your neighbors and friends.

I know how you make anonymous calls to the state.

I know how the medical and legal system destroys people.

I know how the German banking system is destroying the world.

I know how the German industry is destroying the world.

I know how Germany has sold out to Communist China.

I know how Germany has created mass-poverty.

Across Germany, Europe, the entire world.

I know it’s all by design.

I know Germany is a major source of evil in this world.

This country is run by psychopaths, sociopaths, narcissists.

This country is run by a caste of stone-cold bureaucrats fully committed to their cause.

The living backbone of totalitarian regimes, no matter the ideology.

You cannot “help” these people.

You cannot “stop” these people.

You cannot “convince” these people.

They are the system.

Their lives depend on the system.

Their existences depend on the system.

They have everything to lose by opposing the system.

And that’s why they make decisions that support the system.

Free will matters, doesn’t it.

Tell that to the cops when they knock down your door.

Tell that to the tax agency when they lock down your bank account.

Tell that to the wanna-be-controllers who have locked down the world.

There is no loving your way out of it.

They will kill you, if necessary.

They will force-vaccinate you, if necessary.

They will confine you to an asylum, if necessary.

They will experiment on you for the rest of your life, if necessary.

They have done this to the First Nations in Canada.

They have done this to the Native Americans in the U.S.

They have done this to the Aboriginals in Australia.

They have done this to the native peoples in Africa.

They have done this to human beings in Germany.

They have done this to human beings all over the globe.

If you still believe you can love psychopaths, you haven’t dealt with them.

They will stop at nothing to break you, to enslave you, to control you.

They want absolute power over you and everyone else on this planet.

This is the world they have created.

This is the world they will never give up.

They will never stop violating our free will.

They will never stop harassing us.

I have come to the conclusion that only Divine Intervention can put a stop to this, the nature of which be up to debate.

Personally, I favor a scenario where humanity gradually awakens and implements constructive solutions in order to establish its own self-experience habitat in a more high-vibrating environment, at best free from low-vibrating inside/outside interference.

How would humanity, in its current diverse stages of self-realization, react, were Ascended Masters to appear globally and call the shots?

Taking them by the hand again?

Teaching them “the path” again?

Correcting them time and time again?

Until the Masters decide to leave humanity again?

Until the memory of the Masters fades after a few generations again?

So that humanity leaves “the path” by free will again?

Inner inquiry suggests this has happened time and time again.

Humanity has to come of age on its own, by natural design.

Humanity is a complex mosaic of groups-of-expression-of-self.

These groups resonate on their collective levels.

Their members resonate on their individual levels.

Awakening continues beyond aspects of identification-of-self.

From diverse aspects of differentiation-of-selves.

Everyone to his liking.

Everyone to his choice.

Everyone to his preference.

Everyone to his calling.

Everyone to his attraction.

Everyone to his density.

Everyone to his immensity.

Everyone to his expansion.

Everyone to his dimension.

Everyone to his true size.

Everyone to his down size.

You are doing your part, Yuri.

The PAT is doing its part.

Many other beings on Earth are doing their part.

Many other beings outside Earth are doing their part.

Many other beings in other realms are doing their part.

Source is doing Its part.

May Divine Intent Manifest for the Highest Good of All.