After the staged events in the US capital by the dark cabal to discredit the peaceful revolution of the awakening American people, humanity has reached its lowest point in this 3D matrix-reality of ascending timelines, and the devastation of the American people is so thick that it can be cut with a knife.

What no one else will tell you: The last 48 hours were the most transforming and liberating moments in the history of mankind. I know it as all the energies that accomplished this feat flowed through my fields and body and I had to process them under extreme stress. I was attacked again by the dark ones but could quickly repel their attack. I knew that this time it came from Italy and I was fighting on two fronts at the same time – here in Italy and in the USA through my protuberance field while feverishly activating the threefold flame of life, the seat of the soul in all awakening human beings worldwide.

It suffices to say that we severed infinite timelines again in preparation for the impending shift where all the negative scenarios can play out. What was left on our ascending timelines is the Potemkin’s village of the seemingly overwhelming power of the dark cabal that believes to have destroyed Trump and his movement of awakening people. Wait and see…

The matrix has begun to crumble full force and all roads lead to Rome where we installed the new spiritual paradigm already more than 2 years ago. Since then Rome is the new spiritual centre of the new earth. This is how Divine Providence works through us in human gestalt on the ground.

Rome, the Italian government, and Italy have been fully embroiled in the rigging of the US elections. This news came on the same day as the dark cabal committed their false flag attack to allow the left radical terrorists to storm the Capitol and render the corrupt politicians the pretext to endorse the fraudulent election results. This Pyrrhic victory of the deep state didn’t even last a day.

Here is what we know so far (source):

“A former IT contractor for the Italian military testified in federal court in Rome that while he was working for Leonardo, SpA in Pescara, Italy he helped rig the U.S. election against Trump by using the companies satellites; $1 billion in U.S. contracts now suspect.

It was a solemn day in a federal court room in Rome, when Arturo d’Elia took the stand. The former employee of the 8th largest defense contractor in the world Leonardo SpA  — which is partially owned by the Italian government –began his shocking testimony with the usual swearing in on the Bible. That was the last thing that was ordinary about the day.

As the crowd gasped, he outlined the scheme that proved successful in using Leonardo computer systems and military satellites located in Pescara, Italy to help Dominion steal the U.S. election for Joseph Biden. He explained how recent reports of a hack at Leonardo were orchestrated to cover their tracks. 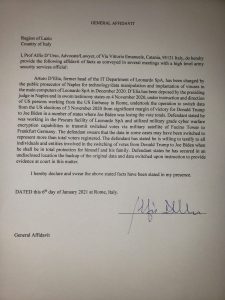 The news connects the dots between Eric Coomer’s actions for Dominion Voting Systems in the U.S., the CIA raid in Frankfurt, Germany to protect Dominion’s servers and destroy the evidence of election fraud, and now the actions at Leonardo in Italy.

In a press release, Nations In Action, a government transparency organization, partnering with the Institute of Good Governance,  stated, “This is the long awaited proof that a flawless plot to take down America was executed with extraordinary resources and  global involvement. Americans and elected officials now have proof that the election was indeed stolen.  This provides the mechanism for each state to recall their slate of electors immediately or face lawsuits and  request all federal government agencies to lock down all internal communications, equipment and  documentation from the Rome Embassy.”

Make no mistake, this is a coup d’etat that we will stop in the  name of justice and free and fair elections,” stated Maria Strollo Zack, Chairman of Nations in Action.”

See also this video with Maria Zack on America Can We Talk (This video was deleted by YouTube but you can watch it here):

I had heard about that already in December from Italian and other sources and I have discussed with Sophia the fact that Conte has practically vanished from the scene and is hiding somewhere. Renzi who is in cahoots with Obama has also gone underground. He comes from a criminal Mafia family in Florence and is as dark as Obama and Trudeau in Canada, the illegitimate son of the communist Fidel Castro.

Watch this video before it is deleted from Youtube:

Below is a video interview that was deleted by Youtube but there is a recording you can find under this link:

I think Maria Zack is speaking (see also the full recording above), she explains at great length how this conspiracy was performed. She must have informed Trump in Mar-a-Lago before the big demonstration in the capital and this explains the very relaxed Trump, holding his speech. I was watching him very carefully and was wondering how could he be so relaxed and sovereign, given the incredible pressure under which he stood and still stands. He must have known that he has all the trumps up in his sleeve.

The cosmic thriller has commenced. You have the 3D thriller and the higher dimensional plot which we are creating now for many years. Now you know why we are in Italy, why we anchored the new spiritual paradigm in Rome, built the two centres of light in Liguria, and purged the whole country from the darkest heritage of the Vatican cabal.

Remember the words of this lady. “They have lost already and they, the dark cabal, do not know it yet… We had so many miracles, incredible miracles that helped us..”

We have known it for decades and the upcoming victory of Trump is entirely the success of our light work. However, this does not mean that he will remain president. There are many more options on the table. But the truth must come out and it is – Trump won the election and Biden and the democrats, supported by the deep state, rigged it in gargantuan scope.