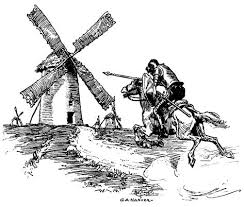 We are currently witnessing the Grand Illusion of all awakening people who are for the first time in possession of a tiny piece of truth, such as the rigged US elections, and believe that they can convince the dark ones, the elite, the deep state to accept this piece of truth.

These are the new idealists, the American Don Quixotes from the walk of life of Bannon&Co. who have lived for so long in the darkness of lies and distortions that the tiny glimpse of truth they have acquired throughout life seems to them to be worth even dying, for what? – in the name of unprocessed nationalism. Sancta simplicitas!

But the quest for freedom in these people is evident and this is the beginning of the liberation of humanity from eons of Reptilian enslavement.

This Great Illusion was shattered yesterday in Congress and Senat and the cowardly traitor Pence confirmed my assessment about his spineless character. I assume that Trump already knew Pence would betray him when he spoke yesterday to the people. Forget about all the possible psyops around the chaos in the Senat and who did it. This is irrelevant now.

What matters is the truth we have known all along:

No dark entity in power will ever concede the truth and admit that he has lied and cheated all the time because he will then have to lose his power and he will never do that. Power is his only lifeline as the dark entity has severed his cord to the soul.

Dark entities can only exist when they exert power over others and that is why they enslave other people. This is true for individuals as well as for institutions, nations, and the entire human race. That is why the human race has been a slave race for so long and this is where the Grand Illusion comes from – to be a slave and to believe that you are a free person because your slave masters told you so.

This has been the illusion of the Americans and the Western citizens for so long and now this illusion has been shattered. It had to be shattered before they can begin to liberate themselves by recognizing that they have always been free sovereign beings and creators of their reality.

Human liberation can never happen by convincing the dark oppressors of humanity that they have lied, cheated, and oppressed the people for so long and now have to repent. This is the current Grand Illusion of all the newly awakening Don Quixotes – the driving force of the peaceful American revolution.

These are the souls we must lead out of their current illusion and convince them that political wrangles only perpetuate their enslavement. If they want to be really free, as their innate desire now grows after I activated their threefold flame of life, the seat of their souls, then they must come to us and embrace our spiritual ideals. This will be the proverbial leap in consciousness that all higher dimensional sources herald for the End Time.

Now is the End Time.

After all US state institutions – the judicial (Supreme Court), legislative (Senat and Congress) and now the executive (Vice President) powers – have blatantly failed to reveal the truth and sanction the lie, the deception and the fraud of the deep state with respect to the current election in a veritable Catch 22, the frustration and the disillusionment of the masses peaks to heaven. It is from there that salvation will come as many speakers at the rallies yesterday in the US capital testified by appealing to God as their last hope after their hope in earthly justice has faded away.

There is God, indeed, and it is in every one of us as a soul, and now is the time for the awakening masses to discover their souls which I am helping downloading in their human vessels for many weeks. But for the soul catharsis to fully unfold, we also need Divine Intervention as an energetic interdimensional Shift to bring the masses in a state of total shock and catalepsy.

First, the events on the ground had to play out and demonstrate to the people that their hope in the reformation of the rotten state institutions is precisely that – an illusion. When all awakening candidates become totally disillusioned and devastated, can their souls enter their bodies as the ego-minds must first surrender to the futility of any 3D action to improve human life by asking the state institutions of oppression to recognize your right of personal liberty and thus abolish themselves. Again, Catch 22!

The newly awakened Americans and later on Europeans must understand that it is not helpful when one cites ad nausea an empty constitution which has always been a blank check for the elite to deceive and oppress the people.

The Liberty Constitution is in each and every one of us, it does not exist in a written form as it is in the threefold flame of life, the seat of the soul of each incarnated human personality. It is an energetic reality and is called the Fountain of Freedom.

This will become evident with our ascension during the Shift and then we will need no more arguments to convince the people to embrace their blissful future. They will leave the national capitals and the state buildings empty and do not need to storm them like the empty Bastille during the failed French Revolution or the empty Capitol yesterday and fall, again and again, into the traps of the evil ruling cabal.

The peaceful American Revolution can only take place in the hearts and minds of the people – there can be no peaceful demonstrations against the dark oppressors as they will always send their agent provocateurs and turn them into violent events, this is the human nature of perennial deceit that goes back to the Atlantean energies of betrayal and treason – and open them to the transcendental dimension which they have so vehemently rejected in their rabid agnosticism for so long.

And we, the enlightened few can testify how dark and destructive human agnosticism is, it is as bad as the current recalcitrance of the dark elite to acknowledge the truth and reverse the fraud in the US elections. In this sense, there are only nuances between the dark ones and the newly awakening people from our perspective. Keep this in mind.

This is the perfect pedagogical mixture that will help the people to awaken to the full truth. Indeed, as soon as the US legislative ratified the election fraud, the portal was widely opened for the beginning of the Era of Revelations where we will be the new teachers and leaders of humanity.

Yesterday and during this night, there was a massive shift and you will see much more of it very soon.

* La Grande Illusion is a 1937 French film classic by Jean Renoir about WW1. The title of the film comes from the 1909 book The Great Illusion by British journalist Norman Angell, Nobel Peace Prize winner, who argued that war is futile because of the common economic interests of all European nations. The perspective of the film is generously humanistic to its characters of various nationalities. We will soon further develop this truth that all humans are One and have common interests as multidimensional creator beings so that war between nations or civil war as a means of solving any human problem is the greatest illusion of all. And the last thing an evolving transgalactic civilisation needs is the national state, the origin of most evil and violence on this planet. The film La Grande Illusion overcomes precisely that – the rabid European nationalism that led to WW1.

Soon after I published this article, the Arcturians came today with a message on the same topic that fully validates what I have said above. I love this kind of confirmation. The Arcturians stress one more time how important it is, not to bury the head like an ostrich in the sand of empty meditations but to observe with a keen eye the current political and societal events leading to the Shift and explain to the people why it is indispensable. Only in this way, by virtue of the clarity of our minds, can we mitigate the fears of the people that will soon loom high and will lead to a collective catharsis.

The Violence in Washington, D.C. ∞The 9D Arcturian Council, Channeled by Daniel Scranton