The Most Important Intel on the Internet 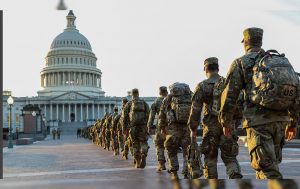 Yesterday I informed you that Trump has enacted the Insurrection Act of 1807 on Jan 11th and then put it in his drawer for two days to activate it finally on Jan 13th as Simon Parkes confirms in this video towards the end. The video has been just taken down on YouTube but you can watch in here:

He also announced that there will be more military presence on the West and East Coast and in particular in such big cities as Los Angeles and New York where many of the dark cabal and criminal corrupt politicians live.

Evidently, the military operation to arrest the dark cabal has commenced with full force in the USA and abroad, and this is now done in an increasingly obvious manner. We will surely see and learn much more about the already enacted martial law in the USA in the coming days prior to the inauguration day on January 20th.

The final arrests of Biden and his clique, and all the other criminal gangs of the democrats, such as the Clinton’s clan and Obama, the most corrupt US president which Parkes mentions in his interview and suggests that he will be indicted publicly, will be done at the very last moment. The military is now taking down the cabal in lower positions so that the evilest individuals on the top of this criminal pyramid can be neutralized at the very last minute with great surprise and aplomb.

It is remarkable that none of the more prominent alt-media outlets in the USA have realized what is actually happening in their country and are continuing to lament the loss of Trump and his party, which is no longer the GOP.

Trump has just announced his new unity party in an official statement and nobody gets it in the USA. Remarkable morons, these American patriots – that is why the military had to make a clandestine coup d’etat to liberate the Americans from themselves as they will never do it on their own with their mired minds:

Watch this video very carefully! Does Trump speak and look like a defeated president under the second impeachment in his last days of the presidency or as somebody who proudly announces the new unity party of America which he intends to lead after the transition for many years to come? And did he ever mention Biden? He is probably already under house arrest and tries to appease the winner Trump.

Of course, even Trump has no clue that there will be an interdimensional Shift very soon and then a change of the Guardians of this planet and the new Golden Galaxy:

In his address to the Nation as the new duly elected president, Trump not only doesn’t mention Biden with a single word but confidently announces the arrival of massive troops of the National Guard in Washington DC, allegedly to guarantee the peaceful transition on the inauguration day: 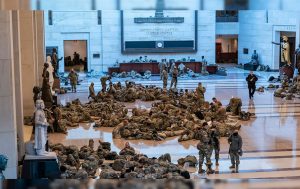 The stupid dark elite and the democrats believe that these troops are there to protect Biden and them from expected violent attacks of Trump’s supporters. In fact, they are already there to arrest all the corrupt politicians in the swamp who committed treason by endorsing the rigged elections and announcing Biden as the next criminal usurper of the WH. It is amazing how the cabal now stumble into their own traps prior to their upcoming final fall from grace in a few days from now on.

In his latest update from yesterday, Simon Parkes announces that according to his latest intel, Trump even won California (go to minute 14) which is remarkable for many reasons (This video was initially deleted on YouTube but you can find it here.):

You must remember that I wrote already on December 19, 2020, in my energy report

that I had a big conference with all American patriots at the astral plane in that night where I illuminated them about the truthful situation regarding the election in the USA. In particular, I told them that Trump has not only won the 6 contested states, upon which they concentrated but most probably also California, the blue citadel of the democratic camp:

“I expanded on Navarro’s report in this very busy night in the astral plane in long discussions with all US souls currently participating in the revelation of the election fraud. I presented the true scope of the elector fraud as predicted by myself one day prior to the election.

How the US Election Tomorrow Will Affect Our Ascension Scenario

Essentially, I confirmed my forecast that the dark ones rigged about the same number of votes in favour of Biden as roughly estimated in this article (30 to 50 million). Most of them were fraudulently generated by the Dominion voting machines and a large number of the votes were switched from Trump to Biden. The major forms of fraud are described by Navarro in his report.

In particular, I made the American people aware at the soul level of the fact that the single biggest fraud happened not in the contested 6 battleground states but in California, which is considered to be firmly in the grip of the democrats and is currently not a topic in the discussions. I had the knowing that Trump might have even won California or lost it by very little. This changes of course significantly the inflated, ridiculously fraudulent number of votes for Biden that has been officially announced by the fake MSM – 81 million. There are not that many living voters in the USA in the democratic camp.”

This sheds new light on the massive rigging that had to be done with the Dominion voting machines and why so many countries, NATO allies of the USA, such as Germany, Italy, GB, Spain, etc. had to be engaged in the rigging of the results from abroad by hastily creating new algorithms in the darkness of the night and even in the morning hours after the election day when they stopped counting the votes simultaneously in all six states:

Read here: What Comes Next?

This is the most unprecedented international coup d’etat on the American republic that human history has ever seen and it is an act of war of the NATO allies against their own leader – the USA.

Just try to swallow this fact when it is officially announced. Unless the Shift will also arrive around the same time and change this reality forever, this act of aggression on the American sovereign, the American people, and their duly elected president Trump, is sufficient to cause a Third World War.

And I am sure that this war has already happened on lower timelines which we already severed these last few days and will continue severing through an interdimensional split till the final global Shift takes place. The last days were extremely tense and this is always the case when we sever lower timelines to be destroyed in a catastrophic ascension scenario.

We have done it so many times in the past since we first ascended this planet and humanity on May 28, 2014:

What is remarkable in this whole story is that even the best-informed insider one can find on the Internet, Simon Parkes, learned about the electoral victory of Trump in California only yesterday while I knew about that already on December 19th, 2020.

There is 3D-intel and there is 5D-  and higher dimensional intel to which only we have access.

In fact, I already knew four years ago that Trump won the popular vote in 2016 when about 5 million votes were rigged in favor of Killary, mainly in California as nobody would suspect that in this blue state and question the results.

After all, I was the one who helped Trump in a most decisive manner to win the election in 2016 with the creation and expansion of my protuberance field over North America.

Read here: How the US Election Tomorrow Will Affect Our Ascension Scenario

Trump also owes me and the PAT his landslide victory this time as, without my gargantuan energetic effort to open the threefold flame of life, the seat of the soul in all ascending American patriots, he would have miserably failed and all the 200 generals of the resistance with their “famous Q-computer” as Simon Parkes praises them could not have prevented that.

The Pathway to Freedom: How Humans Will Change as Energetic Systems During the Upcoming Global Shift

How to Create New Timelines of Ascension For Humanity

Herewith, I want to give all my readers the conviction that you are the best-informed humans on this planet about what is happening in real-time in order to stay calm and be the proverbial rock in the energetic breakers that can hit humanity at any moment from now on and cause a cataleptic explosion of emotions of unseen proportions:

This will be the most glorious day for the PAT and our crowning achievement of decades of sacrifice and strenuous light work to save humanity from its perennial reptilian enslavement.

The American resistance would have been toast without our physical presence on the earth in the End Time as Logos Gods and Ascended Masters.