Everything that happens on this earth and in All-That-Is occurs in a cycle of 7 years even though linear time is an illusion and only one parameter in an unimaginable complex algorithm of innumerable variables that create the tissue of human existence.

Today, we were urged by our HS to re-read and refresh the energy reports we have published in August 2013 as this will give us an idea of what is in the making and will eventually occur this August of 2020. I must admit that I had forgotten most of it and I have a good memory. Therefore, I can safely conclude that most of the readers of this website will remember even less than us, given the fact that we were the main protagonists in these events that changed our lives forever.

I will publish from now on every day this month one or two reports with the same date seven years ago as I published more than 70 articles in August 2013 at the height of the light work activity of the PAT as you will have the pleasure to rediscover in the coming days. You will be amazed to find out what gargantuan work we accomplished already at that time. This will give you the appropriate measure of what we are achieving today on a much grander scale.

Everything we shall experience this year was already laid as a foundation 7 years ago. Were we not so successful at that time, none of the miracles that will happen this year would have been possible. This has to be emphasized unequivocally at this place.

The first report begins with the stunning miracle which our beloved PAT member Jerry R James, whom I hope most of you still remember fondly, experienced and reported to us. It happened exactly 7 years ago.

I haven’t heard from Jerry anything since he had last written to me on August 27, 2017.

When I read his last email to me, I knew that this was his farewell message to me and the PAT which I have kept confidential till now. Since then I have not heard anything from him and my HS tells me that he has left the earth and enjoys finally the bliss of the new earth together with his twin flame Anita, for whom he had such an unbearable longing after she ascended in spirit on February 8th, 2013 and left him physically alone on this unfriendly planet. I say “physically” deliberately as she was in spirit all the time with him as his twin flame as the Elohim confirmed in a message (see below):

“Thank you George for the message. I seem to get a feeling of more isolation each day and your email helped. I am not any more isolated than I have been for years but for some reason, it seems so and I have developed a melancholy loneliness that seems to hit me each night along with a rather gentle download that makes me warm, sleepy and the bottom of my feet get numb. I looked at the sun setting outside my house and saw a rainbow last night. It’s the first time I have ever seen a rainbow without any rain and the sky was gorgeous above. I have attached the pictures. It must be great to know where you will be after the shift and that some of your family will be with you. I have no idea for myself.  In dreamtime I reconnect and talk about my life including ascension with so many from my past even casual acquaintances. They are all there but not in waking time.  I guess it doesn’t matter where I end up after the shift. I only want to feel good and be happy and even though much must occur for that to happen I trust it won’t be so difficult as it seems now.

Thanks for remaining a friend. 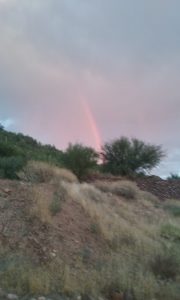 I want to begin my series of retrospective reports from 2013 with Jerry’s miracle of love that enabled him to meet with his beloved twin flame Anita in the 5th dimension in full consciousness in a physical body. This miracle of love achieved by Jerry exceeds by far that of the mythical Orpheus, who was the first and only mortal to enter Hades and bring back his deceased beloved wife Euridice, though with the opposite sign – Jerry ascended through his love to the 5th dimension and met his beloved Anita in Heaven.

Breaking News!!! The Miracles of the New 5D Earth Have Already Commenced

Anita’s Advice: Eat and do the things you love one last time before your ascension. Tomorrow is the last normal day.

I have just had the most wonderful experience, even better than the one I wrote you about in the past.

Tonight, it is only 11PM (August 8) here now, I had high restless energy and could not sleep at first. Then I felt myself melting, the same old familiar feeling during ascension test runs before and suddenly I was able to get out of bed. I began jumping and it was more like flying. There were sparkling lights everywhere in the room (like twinkling clear Christmas lights).

I suddenly wanted to go outside. And the night was alive. There were at least three full moons and sparkling lights everywhere. There were very tall pine trees and the birds were singing in the trees even at night. Then I began to see a lot of people arriving, getting out of cars and I was looking for Anita. I did not see her at first but finally I did. She looked like she did in her twenties.

I picked her up and spun her and we both spun in the air as if we weighed nothing. We talked and laughed. I asked her if she knew what all had been going on since she left and she said she watched just like we watch television. She admonished me a little for being so negative and thinking and saying such bad things about the higher realms etc. because of the delays, but it did not matter because I had actually made it. It was over.

I asked her if I could stay this time and she said “no” but maybe tomorrow night, but soon for sure. She told me tomorrow would be the last “normal” day to spend as much money eating or doing anything that I wanted.

As usual the reality began to fade back into this one and here I am, but it was so “real” this time. I think now we all have made it finally to the shore. I am so excited and feel better than I have in a long time. Words fail me to describe how marvelous this place is. Worth the wait and sorrow, believe it or not.

I am speechless, this is the greatest miracle I have ever heard so far. This was an out-of-body experience but as your crystalline body is fully developed now, you have felt it as a very normal and natural transition to another dimension.

I have just received a message from April’s HS that confirms the beginning of miracles since August 8, when your miracle happened and increasingly so in the second half of the Lion’s Gate between August 8-26, after this portal has been fully opened yesterday.

Congratulations and I am really very happy that you have had this blissful experience – you have earned it billion times.

This miracle happened one day after we received an important message from the Elohim that on August 8th, 2013 we had commenced with the third and final Harmonic Convergence of Ascension of Gaia and humanity that began 26 years ago in 1987 and which I personally felt at a very deep level at that time. All signs are that this 3rd Harmonic Convergence will be completed this year.

Since Amora transfigured her physical body and ascended as the first human being to Agartha a few days later (I will report on these events in due time as promised above), there was some confusion among the PAT members as to what happened to Jerry and to Amora in August 2013.

The Elohim came on August 16th, 2013, and gave us this explanation:

The Elohim: Not Every Astral Journey is Ascension Through Transfiguration of the Entire Physical Body at the Subatomic, Quantum Level

” Greetings, we are the Elohim.

With regard to the question concerning your fellow PAT member, there is a difference in what each vessel has achieved, in each of these very beautifully divine moments.

Your experience, as set up by your Soul (Amora), coupled with your clear desires, was what is called “Transfiguration”.  This is the description of a process defined exclusively by the Changing of the physical vessel, from one nature, into another nature – another of completely differing qualities, in terms of molecular structure, energy source and function.

What has happened to your friend (Jerry) is a completely unrelated, and an incomparable event, where this One has traveled to a different dimension, within a dimension.  This is a highly complex event and it took place in an “inner plane”, so to speak. A temple of grace, upon an inner plane. Indeed, this instance also makes note of the divine nature of the gift of this individual to his own inner process, by showing all is possible. The ability for him to achieve this kind of connection, to such a place of beauty, was borne of sheer love for his twin flame and his deeply heartfelt desires to re-connect, although he has never “lost” this connection.

There is only one thing we wish to impart with regard to this discussion. Each element to his own element. There is no specialness, no qualification, no rendering of a higher or lower order than the other. Everyone’s experience is unique, perfect, and has no need of comparison to another. In fact, comparison in itself is the diminishment that pulls one back into density by it’s own action.

Within all dimensional expressions in and above the Fifth Dimension, there is no action. Action and reaction are density constructs and simply do not apply. Each experience is beautiful, joyous, and loving as it is, by itself. Honour and accept each reflection, as it is shared.

You are loved dearly, each and all.

We are the Elohim.”