I have refrained in the last years from asking the PAT for an active intervention in the history of mankind as such invitations have become inflationary among the new age community and have not achieved much. But this time it is different.

Yesterday, the darkest and evilest Israeli-Zionist cabal headed by Netanyahu hit Beirut with a nuclear missile. The first explosion of the Beirut port was caused by Gabriel anti-ship missile of Israel. The second explosion was caused by Israeli Delilah missile from F16 carrying a nuclear warhead. This photo captures the flight of the Israeli nuclear missile: 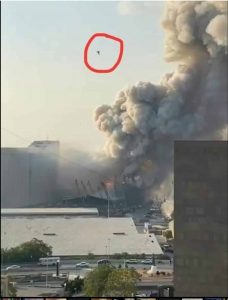 You can watch the nuclear explosion on this graphic video:

The Beirut explosion is about 100 times bigger than the 2015 Tianjin explosion, about which I reported at that time, or estimated 5.4 kilotons of TNT equivalent. Hundreds of people have been killed and many thousands wounded. Beirut is again a war zone as in the ’70s and the ’80s.

Why did this happen?

Very simple! I have informed you that the evilest big, ugly reptilians (Draco) that were the masters of the human race and have enslaved and killed humans like cattle throughout the entire history have been eliminated by us on June 10, 2020.

Read here: Why We Had to Eliminate the Reptilians (Draco) From the Earth on June 10, 2020

Since then, the human cabal is in disarray, in particular, the Israeli-Zionist cabal that is at the core of all crimes and genocides on this planet. The chieftain of the Zionist cabal is Netanyahu who is probably the evilest person on this planet. He has been the source of all wars and crimes in the Middle East and elsewhere in the last several decades. I have reported about that in the past, especially with respect to the war in Syria.

He has been stoking war with Hezbollah now for several years and is at the same time afraid to attack them directly as Hezbollah has accumulated so many missiles and other effective weapons since the last war with Israel in 2006 that this organization of the resistance can reach any part of Israel and destroy it without the Israeli army and defense system being able to protect the country and its citizens. This is well known, especially as Hezbollah practically defeated Israel in the 2006 war and this is the biggest trauma of Israel in its short history that is now coming to an end.

This weekend the largest protest yet, with over 10,000 demonstrators rallying against Netanyahu, took place in Jerusalem. The people demanded the arrest and prosecution of this criminal evil-doer:

In largest protest yet, over 10,000 rally against Netanyahu in Jerusalem

The noose has been tightening around the neck of this evilest Zionist for some time and now even the Israeli people are beginning to awaken and demand justice. Netanyahu knows that his days in power are numbered and decided to respond with this terrible crime. He destroyed willfully the port and the centre of Beirut as to divert from his other crimes at home, for which he has been effectively exposed.

This is the kind of dark, evil mentality and behavior we must reckon with from all dark entities on this planet in the days ahead before our ascension can take place as Divine Intervention and they are fully exposed in the End Time of Revelations.

Yesterday, when this crime occurred, we were urged by our guides to visit one more time Sanremo and perform major light work there that paves the way for the appearance of the city of light in Italy. When we did our cleansing invocation in the church, it was suddenly filled with countless angels, archangels, ascended masters, and other forces of light. The entire interior of the church was illuminated with golden Christed light. It was a real celebration of the entire universe.

With that, we activated the impending appearance of the 5D city of light of New Lemuria (New Raetia) in Italy and established its interception with this reality.

Back home we were hit by a massive cleansing wave that had nothing to do with our higher dimensional light work in Sanremo. Our fields that encompass the entire globe and are very sensitive to dark energies were devastated by the nuclear fallout from this explosion in Beirut. Only later in the evening, I read what had happened in Beirut but it took me some time to learn the details.

And here is my perspective that I hope will be embraced by the entire PAT.

We have decreed in the past that we do not want to experience any nuclear explosion on our ascending timelines as such explosions damage significantly their energetic structure at the quantum level and may prevent the ascension. This is an inviolable decision that no dark entities or faction can defy with impunity.

Let me reiterate one more time the dialectic nature and ethics of our war against all dark entities on this planet as the light warriors of the first and the last hour. It is our duty to expose the darkness and cleanse it wherever we discover or encounter it. But we are not allowed to attack the dark ones personally as long as they have not directly attacked us.

I have explained in recent articles how we eliminated the very dark and evil rogue Atlantean clique that was responsible for the destruction of Atlantis on March 27th 2020 after we have been attacked for more than 5 months by them. Most of the time this happened without our full awareness and only in the last several weeks prior to their elimination from the earth we were in the full knowledge of their evil attacks, when we also severed all Atlantean timelines from the new ascending earth and thus saved the entire planetary ascension.

The same happened when we were first attacked by the evilest Reptilians from the Draco constellation on June 10th this year – then they were fully eliminated by us from this planet with the help of the GF. These reptilians were directly responsible for the current lockdown.

Read here: The Full Moon Eclipse Portal on July 4th Was a Giant Leap in Our Ascension – Full Report

With that their dark, evil human minions lost their masters and masterminds. The cabal is now in total disarray and dissolution as they know that they are losing control over humanity. That is why they are acting on their own in the most unhinged and brutal way as we saw in Beirut yesterday.

The use of nuclear weapons against other humans on our ascending timelines has been prohibited by us and the Source a long time ago. This is a grievous breach of the ruling cabal against the Law of One, the Universal Law of Ascension for the planet earth, the custodians of which we, the PAT, are.

Therefore, we have now the perfect situation where we can make a decree in the name of the Source that we will not tolerate any second attempt to start a nuclear war or explosion.

As I have reported, we have been given the Divine Dispensation for Divine Intervention by the Universal White Brotherhood (UWB). The two Bulgarian masters of the UWB, Peter Danov (Deunov) and Mikhael Aivanov came on July 17th and handed over to us this Divine Dispensation in a personal message, which Amora received.

Hence we are now entitled to intervene in a most decisive manner in the destiny of mankind. We have the divine right to officially invoke the already given to us right for Divine Intervention as the light warriors of the first and last hour, the star seeds who are responsible for the planetary and human ascension  – the PAT.

This Divine Intervention includes the global shift to higher human conscience and the beginning of the long-awaited revelations.

This epochal event will be accompanied by our ascension and appearance as ascended masters in front of humanity as the new spiritual leaders and also the manifestation of the city of light which we prepared yesterday, at the same time when the criminal Israeli government of Netanyahu hit Beirut and Lebanon with a nuclear missile.

Therefore, I ask all true members of the PAT and also all light warriors and workers who support us in our light work to make this short decree with a loud voice three times as to declare to the Source and the Universe that we will no longer tolerate a repetition of this crime that was perpetrated by the evilest Israeli-Zionist cabal on the Lebanese population and that before such an attempt can be accomplished one more time a Divine Intervention will take place.

Herewith, as a member of the Planetary Ascension Team, ascended master and Creator God, and designated spiritual leader of the new ascending humanity, I decree:

I will no longer tolerate any similar crime as that perpetrated by the darkest and evilest Israeli-Zionist Cabal headed by Netanyahu in Beirut on August 4th, 2020, on all ascending timelines, for which I have assumed personal spiritual and energetic responsibility at the soul level and as an incarnated human being.

In case such an attempt is in preparation, I decree the immediate enactment of the Divine Dispensation given to us through the captain of the PAT, Dr. Georgi Alexandrov Stankov by the Universal White Brotherhood as presented by the ascended Masters Peter Danov (Deunov) and Mikhael Aivanov on July 17th, 2020.

This entails the immediate Divine Intervention of the Source (Godhead) for the planet earth and its human population in form of a global shift in human awareness and conscience and the appearance of us as the new ascended masters being the embodiment of the “Second Coming of Christ”.

We are ready to assume our mission as the new spiritual leaders of the new ascending humanity.

May also the higher dimensional cities of light manifest simultaneously in this reality, from where humanity will be guided by us to a new life of abundance, absolute health, and personal freedom through the radical elimination of all human conditions that have caused the Fall From Grace of the human race in its current history.