Perhaps at no other time in universal history has a saga of epic proportions been brought to bear upon a remnant of incarnated souls, think Old Souls, to provide the leadership and associated responsibilities to transition a wayward species from its enslavement and enumerable frailties. The gods, angelic hosts, our monad families and all light beings in the astral realms across the multiverse must look on in awe at this most galactic-precedent-breaking event with anticipation for us, the PAT (the Planetary Ascension Team), to shine in our divine quest brighter than the greatest stellar supernova ever witnessed in the interstellar medium of space and time.

Read: The Journey of the Planetary Ascension Team

It is a cosmic tale of immense reverberations throughout the universe; the Magnum Opus of the Akashic Records. It is my personal contention that while still entrenched in the daily affairs of the 3D matrix, this monumental transition invites a personal scrutiny for each light warrior of the first and last hour to consider, both to their individual anticipations and contributions leading ultimately to their appearance as Ascended Masters. At this unique juncture, we would do well to consider our individual strengths and aspirations once the Ascension manifests in all its glory. This individual inventory will help each of us to assess not only our ongoing, evolving and continuous spiritual path as manifested in the simultaneity of the NOW but enable us to position ourselves most strategically for the “Finalizing of the Optimal Ascension Scenario.”

In order to provide the optimal cognitive function for a species that since time immemorial has been deceived, manipulated and traumatized by sinister forces in the astral realms in concert with their clone-like human minions in the pursuit of a consummate iniquity of dastardly proportions, the enormity of this physical, mental and spiritual trespass begs an existential question. How do we as Ascended Masters in tandem with the Galactic Federation, the Angelic Hosts, spiritual brothers and sisters of extraterrestrial – galactic origins, in addition to the Agarthans, provide the optimal paradigm of bringing to the light this wayward species? A Spiritual and Existential paradox of staggering responsibility is before us all. It is here where the New Age of inane and feel-good gurus and charlatans depart and the task of the light warriors of the first and last hour assumes its proper role as the Spiritual Stewards of a NEW HUMANITY.

However, it is imperative upon us to enable a smooth transition for the advent of a potential and intergalactic species to evolve in an optimal manner. This undertaking is for a certainty of a critical nature in that once ascension unfolds in the blink of an eye, the likely and assumed response by the masses is to let FEAR rule the day.

Consider this illustration. Sometime in the very immediate future, we all awaken to the Cities of Light replete in our crystalline transformation in the midst of a world of nuclear-armed nation states, a morbid religiosity that has allowed for genocide, false and fraudulent belief doctrines, patriarchal and ecclesiastical control only to culminate in the extreme perversion of pedophilia, in addition to a financial system of a vast Ponzi scheme where debt rules the day.

Suddenly and without due forewarning, beings of immense power are in their midst. What is the likely response of this mass of humanity to such an “alien” appearance? The nation state rulers are likely to promulgate the fabrication that their world is being invaded by extraterrestrials of dubious goodwill…… Ponder for a moment. Again, FEAR, the most destructive sentiment in the universe enters the picture. The three predominate institutions, Political, Financial and Religious or what I term the Triad of Deceit could each rally their adherents with the same call to a fear-ridden agenda.

In truth our divine manifestation must be implemented with an understanding that Ascension be presented as a reality, not just as one of our appearance alone but one of awesome majesty where the Galactic Federation, the Arcturians, Andromedans, Argathans and perhaps with lightships of awe-inspiring visualization are directing heavenly commissioned emanating codes of love, peace and harmony to the newly awakening humanity. Such a divinely inspired reaction on the part of humanity will be realized as an act of loving grace that here-to-before has never been presented in such a magnanimous and benevolent manner. The recently announced meetings that must be coordinated at the dream state and beyond, perhaps one of a mental-spiritual-telepathic connection between PAT members and the Arcturians, seems in order here at this very moment (see also here). 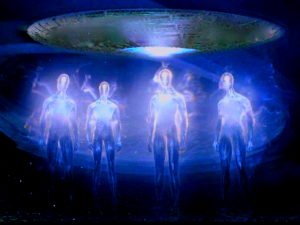 Enter the PAT. Our appearance must begin with an enlightened educational program that encompasses the massive exposure to the fraudulent history that has enslaved mankind across these three great divisions, “The Triad of Deceit“ for eons of recorded and non-recorded time. This historicity will no doubt induce in some the ”Dark Night of the Soul” which will trigger rage, anxiety like a conditioned Pavlovian reflex, and ultimately a catharsis of their individuals souls. Only a calm and deliberate tutelage administered by the PAT will assure their ultimate deliverance from their enslaved condition. Teachers, we are to be!  Entrench that divine task into your minds and light fields. The  immensity of this task can be given some comprehension by reading:

The Dialectics of Human Mind Devolution in the End Time

This transition will be accomplished by the introduction of the New Universal Law of Nature as the template for a holistic governance of rational thought encompassing the spiritual, scientific and axiomatic foundations in all endeavors for the emerging humanity. It ultimately will be our task as the spiritual stewards of the New Humanity to once and for all expose the Triad of Deceit; Political, Financial, Religious as institutions of consummate depravity, whereby humanity must now rise above and assume its rightful place as creator gods of a lost civilization that was delivered by a small remnant of loving and fellow beings, the PAT.

In the interest of brevity, I digress now. At the request of Dr. Georgi Stankov made a while ago to delineate our individual aspirations as Ascension draws near, I have created mine and it continues to be work in progress. To wit:

My intentions as a member of the Planetary Ascension Team

In accordance with my HS and the stated provisions of my soul contract which is now instilling within me the desired intentions of immediate creation due to the arrival of multiple source energies that are now flooding the ascending planetary dimensions, I hereby envision the following as ascension unfolds and the hidden manifestations of recurrent dreams become my reality.

Light codes and adamantine particles from the Source descending upon earth

As a first priority; To practice and inculcate a compassionate forbearance to all who I have offended by either acts of commission or omission in this incarnated life and to reciprocate an equivalent spirit of graceful and commensurate forgiveness to all who have manifest the same misgivings to me.

To understand without any cerebral limitations or reservations the full cognitive, scientific and spiritual meaning of the New Universal Law.

Concomitantly, be able to align all spiritual foundations in accordance with divine revelations emanating from Source to the elevated consciousness of a Logos God and all that entails as a member of the PAT, as light warrior of the first and last hour. Upon my transformation be able to learn instantly all ancient language dialects  from past eons which encompasses Greek, Latin, all Romance dialects and any language of Slavic origin currently in practice today. Additionally, Mandarin Chinese will be my spoken language of choice.

Explore in tandem with a discerning introspection of my many incarnations and in alignment with my Soul Contract, all former timelines and their affiliated histories and what was the major rationale and incentive for undergoing repeated karmic histories whether they were one of splendor or tumultuous trial and how lessons learned therein were inclusive of what was agreed upon in my Soul Contract.

Explore the ultimate meaning of shared love as an essence of the Universe and the cognitive, emotional and spiritual foundations underlying the masculine-feminine bond and what if any a dual soul connection constitutes in this lifetime.

Assume an active role in the promulgation and teaching of true science based on an axiomatic foundation according to the tenets of the New Universal Law with special emphasis on how the current community of cosmologists, physicists and astronomers have been led astray by irrational constructs and unfounded mathematical complexities to the extreme.

The light city of New Lemuria now firmly established in Vancouver will serve as an epicenter for my presence.

However, this chosen destination does not limit my experiential capacity as I will be bi-locating continuously in service to the PAT mission and serving as an ascended master in the furtherance of elevating humanity’s consciousness wherever needed.

Serve as a spiritual intercessor for the immense task of healing the North American continent due to its relentless subjugation to foreign commercial interests and genocidal plunder for the duration of a half millennium.  An emphasis focusing on the spiritual authenticity on the indigenous tribal nations and cultures and a realignment with their sacred traditions to the essence of the Gaia’s consciousness to be fully restored in concert with the spiritual foundations of the New Universal Law.

The previously mentioned priority will additionally extend to the Central and South American regions with an equivalent emphasis on the same spiritual and physical healing practices to become manifest across the South American continent and in concert with the ongoing establishment of new Southern City of Light, Terra Nueva, located in southern Ecuador/ Northern Peru.

To confirm what I already know and that is an intuitive understanding that I am of Arcturian lineage as a starseed.

Since my fascination with Dragon lore and the decade-long study of a ubiquitous and cross-cultural reference to the dragon chronicle throughout the vast epochs of ancient history which actually predated my coming to the awareness of being a member of the PAT, and consequently having gathered a personal library encompassing dragon science from sources throughout the world, I will be an emissary to the long-awaited and peaceful return of dragons to their ancient home of remembrance, Gaia as announced in Dr. Stankov’s post “Return to Eden.”

Thusly, I will serve as a facilitator for peaceful and harmonious relations between an awakened humanity and these magnificent creatures of antiquity.