After reading your most recent post concerning the prevalence of the very limited agnostic  thinking that manifests within the circles of a certain few who may be considered  personages of integrity and of a certain courage by their challenging the deep state machinations of deceit and deceptive chicanery, I began to remember a certain essay that I published within the last year which touches on this very same dilemma.

Americans, being a young-soul nation are easily manipulated into complacency and somnolence concerning the many and varied crimes committed in their name by the Evil Empire. You are quite correct when portraying the likes of Paul Craig Roberts and the Saker as perhaps men of a certain courageous and integer demeanor in their dissertations. However, when confronted with a higher transcendental comprehension identifying the true masters operating behind the veil of deceit in the astral realms and their human political and banking minions doing their bidding, a Maginot line of disbelief results which disallows their intentions from realizing any measure of conclusiveness. It is this mental dilemma of an agnostic foundation which leads such individuals into being the proselytes of Prophets of Doom who are unable to discern the real reality of the human condition. The following essay alludes to this mental impasse as it relates to the population of the United states.

After our many discussions concerning the agnostic state of mind which encompasses the vast majority of humanity from being able to access the transcendental aspects of their intuition and soul-inspired Higher Self, I found myself these past few days retreating from any further dialogue concerning their self-contrived existential impasse and have, in order for that action to provide me some axiomatic-based relief, taken the liberty terming them: “People of the Shadowlands”.  What do I mean by such a label?

Basically, I am speaking here for the most part as describing the mindset of the US population since it is here that the most egregious and consummate indifference is manifest when one considers the many criminal actions undertaken by their government in addition to their lackadaisical apathy to the evisceration of whatever remains of their falsely venerated Constitution. Oftentimes this elitist document is touted as the binding contract which now holds this clone-like STASI operational state, reminiscent of the former East Germany under the yoke of totalitarianism. A majority of Americans are unable to confront the fact that they have been duped, and by a succumbing default have slavishly allowed the cabal-contrived shadow of evil in their midst to essentially control their actions and reactions to the perceptive truth and reality that the rest of the world is realizing en masse.

By allowing themselves to be coerced by such an unforgiving and trans-generational meme of forfeiture to their intuitive and inner-inspired truth, I have taken the liberty of describing this undoing of their spiritual heritage as a symptom of the “People of the Shadowlands”, referring to the famous C.S. Lewis’ book on Heaven & Hell. 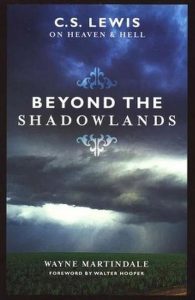 It is not an accusation nor am I in any manner judging their essential moral character, but it is an attempt at assessing the reasons underlying their personal abandonment of thinking on their own and allowing their autonomy as spiritual incarnates into human form to learn the lessons of karma and rise above their shadowed identifications that the masters have given them in order for their spiritual wonder to shine through. It is as if they wander in a ‘shadowland’ not of their own making, while choosing to remain aloof at what is manifestly staring them in the face. By doing so, they have become spiritually reticent and are unable to proceed to a more intuitive and inner guidance of their souls and ultimately to the Higher Self in all its wonder and spiritual resonance remaining within their shadowed consciousness.

Another contributory factor in their inability to rise above the very narrowly-defined 3D thinking paradigm is their reluctance to consider themselves as divine and worthy of a countenance to be realized in a godlike persona. This is to be expected in a culture of longstanding reared in a parochial, anthropocentric and monotheistic tradition.

The words of a first century Galilean: “Is it not written in your Law, “I said, you are gods”?

It is the modern day dilemma of the predominantly young soul age Western and populations of the Levant having been reared in the Judao-Christian-Islamic meme of monotheistic tradition that such a transcendental perception of becoming like Gods seems so egregious. For over 2000 years, the very concept of a Source God of Creation has been presented in written verse and anthropomorphic terms replete with exemplified character traits resembling the very worst of the human condition.

Monotheistic faiths falsely project the belief system that the Divine Force of the Universe is held hostage to racially-centric believers or as in our modern-day alteration, it metastasizes to a recognition of measurable acts of devotion by which the believers then pretentiously position themselves as being preferentially chosen by the Divine. Such a paradigm of separateness is to be further manipulated by hierarchical and male-dominated leaders who act as overlords while keeping the believers in a state of infantile perception.

The evolving nature of these faiths with their male-denominated hierarchies to be followed with elevated and ecclesiastical-placed clerics in positions by which they act as intermediaries between the sinful and lowly human has brought humanity to an absolute and consummate betrayal of who they really are by denying their birthright as divinely-inspired beings whose true essence is godlike.

The Great Apostasy: How Christian Formalism Alienated Mankind From the Divinity Within

An awakened and enlightened being is not so haughty and arrogantly assuming to perceive oneself as the Source Creator, but understands that it is the alignment of their Higher Self with the intuitive or soul based divinity within that mirrors the true Gnosis of a spiritual elevation and transcendental awareness. Furthermore, if such a transition of thinking is inculcated with lovingness in all of their undertakings, then one positions the essence of their being to be godlike in human form. Higher energetic consciousness totally separated by a severed connection to Source or All-That-Is and their elite human minions of a diabolical cabal understand this interrupted inheritance of humanity and have treacherously used this division along religious, secular and institutional hierarchies to foster the worst of the human condition which is on parade for all to see 24×7.

Dr. Stankov’s many dissertations on this very topic are now coming to fruition and as revealed throughout all of history encompassing vast periods of recorded and non-recorded time, there have always been wayshowers, or remnants if you will, who appear and lead by SPIRIT and a willingness to shoulder any burden in their love of humanity and Service-to-Others’ efforts as we stand at the cusp of ascension into a new galactic frontier of Oneness with all and SOURCE.