Watch this video about an unusual strong pulse registered by all seismographic stations in North America from the East to the West coast for which the author has no explanation. In fact, this is a solid proof for the initial physical tremor which the earth underwent when she ascended in a transgalactic shift in the night of February 14th, 2017 to its new position and configuration in the hyperspace of the Golden Galaxy. If the author of this video would have had access to seismographic data from the rest of the world, he would have surely registered the same strange pulse as it affected the entire earth:

Feb. 14, 2017: Seismograms across North America noticed something unusual today, a disturbance of some sort traveling linear across the United States in 2 1/2 to 3 minutes time. These instruments, some many hundreds of miles from each other shared the same odd reading at nearly the same EXACT time. http://earthquake.usgs.gov/monitoring…
#MrMBB333

Thank you for your recent update.  I woke in the night with a massive headache as well.  The intensity of the pain was such that I knew something big was happening.  I was having a difficult time coping with the pain and asked my higher self for a sign of reassurance, I was shown an image of Richard Nixon using the V hand gesture to signal victory.  At that moment I knew whatever was occurring the Light was victorious.  Victorious, indeed.  Upon waking I felt surrounded by tremendous love and joy, so much that I’ve been weeping all day.

thank you for this confirmation of the intergalactic shift this night based on your personal experience. After I recovered a little bit from the nightly shock, I also sensed the higher realms to be very close and got some very reassuring signals which were similar to the V-sign for victory and completion. This afternoon Carla got information that we have indeed finished with our mission in this reality and will move very soon to a completely new level, whatever it might be.

Georgi – Well, this certainly explains my ever-increasing dizziness the past few days!  I must say at about 5 pm pst I was having a latte in the garden and was overcome with sheer bliss.  Pretty sweet!  Carry on, Jim

Yesterday (14th) around 2pm I experienced the most powerful energy that I have ever felt. I had to just lay down and be still. After it was over I saw the number 8888 and knew that something big had just happened.

I won’t take up much of your time, but I wished to say that though I found your post most interesting, I suffered the same symptoms as Carla: my forearms, my calves and a spot over my chest has been red, sensitive and painful, as if I’d suffered a horrible sunburn, though only those places: nothing above the knees, nothing above the elbows,  except a hand sized spot on my chest, and though I’ve been slathering them in lotion, they’re still quite painful.

I couldn’t account for any of it, as an allergy would spread over my body,  and I’ve  not changed my diet, my clothing, my bedsheets, etc…

Just damned odd as I saw it, and without any explanation for any of it, until you mentioned Carla’s symptoms and made me consider an energetic component. Strange days.

In any case, best wishes, and as always, thank you for your post.

I was reading the breaking news you have reported.

During meditation yesterday, 14th, afternoon I got this knowing that our Earth will split soon…

I asked for confirmation from heaven and saw streaks of light through the clouds as it was a cloudy day yesterday. It was wonderful!

Soon it turned out to be a pleasant day..

Thanks for the wonderful news, and pray that you get well soon.

With lots of love,

Hi George, Chills and sweats during sleep the past few days, glad to hear of the successful move!

Indeed, Carla also suffered from chills and sweats yesterday and this night. The stabilisation of the earth’s constellation is still ongoing and will continue to my estimation for the next two weeks.

Oh, my God, I thought I was going to split apart. My heart was palpitating several times throughout the day and then stopped. During my meditation, I felt as though I was about to float away.

But if it does this to us, it will do the opposite to those who are not in alignment with the energies. It is no coincidence that Trump placed troops in Chicago on this same day as we can expect those energies not in alignment to start showing a multitude of signs related to dissolving this reality.

Changes will speed up now as will dissolution.

My daughter just returned from Chicago. She said everywhere she went people spoke about the strangeness of the weather.  Imagine that! In spite of all the crime and trouble they are having, the weather anomaly is what has their attention. This confirms the transgalactic ascension because their focus is on the creation and its nature rather than their daily lives. This is a big change for the consciousness of the masses.

Now it is time for big announcements with constant support and transmutation from the PAT so that we can anchor balance and peace.

It is such an honor to be part of the planet’s ascension and be here at this time.

I am so grateful to God. Thank you for everything you do as well.

everything is in the flow now and rapid changes leading to the collapse of this matrix should be expected very soon. The deconstruction of Trump has commenced with the Flynn resignation as it is not supposed that there will be any resolution within the matrix.

The changes in the weather patterns and even the star constellations may become visible very soon as the earth has moved firmly into her new position in the Golden Galaxy and within a completely new quantum constellation which the Elohim define as hyperspace.

I just awoke from a dream state which took me into an aurora – like dimension. It is 3:00 AM (EST) so it must be midnight your time. Sensations across my physical vessel of immense and penetrating jolts affecting my chest and breathing. Although not of the intensity that you mentioned in your most recent post concerning the transgalactic shift, this is something very different. I feel extremely hot and actually coughed for a spell, which I never do as if a heavy weight was laid across my chest. Additionally, behind the eyes and extreme facial jabs are manifest.

www.spaceweather.com  is showing some peculiar cloud formations termed polar stratospheric clouds (PSCs) in the skies of Sweden. Ironically, I posted an information outline on my Chinese blog  specifying the shift a few days ago and it received a greater amounts of ” reads ” than normal. The Chinese like pictures so you have to be original. My astronomy knowledge plays here in a very big way.

Also , I have attached a recent aurora that I came across which I termed almost angelic like in its form and composition. The arms and hands seem folded and extended in a prayerful grace. It is attached as a pic file. 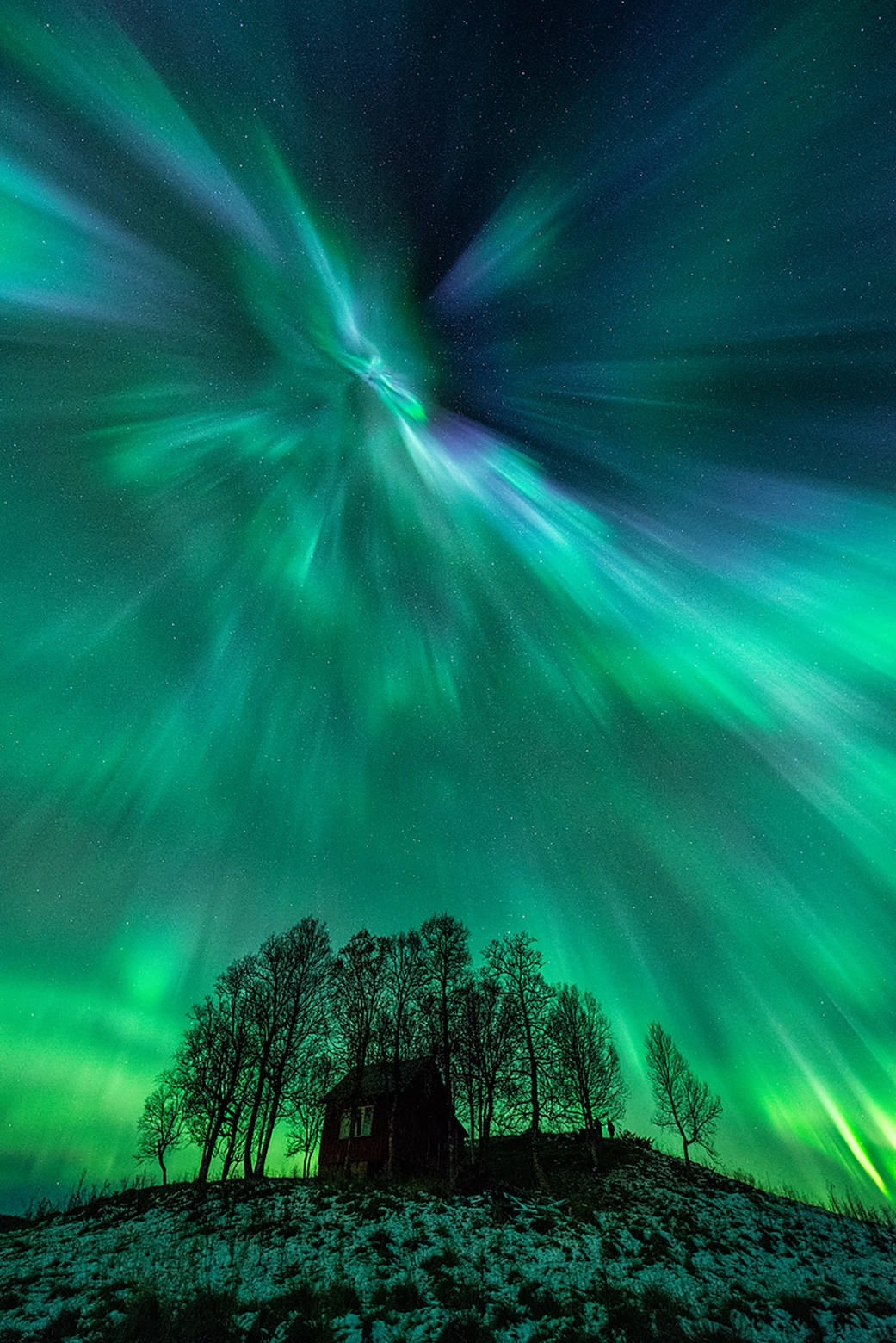 I confirm the involvement of the airways in this huge download of source energies that performed the IG shift. I also had a short breath, I was spastic in the bronchi and could barely climb the staircase. The mucosa of the airways is very sensitive to such high-intensity energy waves and transmutations and responds immediately.

We have a new coronal hole in the sun again. As I can see it, we have for the last two months every few days a new coronal hole which is unheard of. And each time a new coronal hole appeared we were hit by a barrage of source energies which is essentially a proton stream as the foundational energy of creation in this holographic model because protons are the basis of matter and forms. Actually the waves that hit us always anticipated the appearance of the coronal holes 24 -48 hours ahead. I knew that this correlation was not coincidental and that we are preparing for a massive shift, which finally happened on February 14th.

I am now expecting some tangible signs and changes to come very soon as the quantum structure of the earth has now been profoundly transformed. Energy can flow more freely and this configuration will be more conducive to immediate creation. Also the matrix must collapse rapidly and be substituted with new forms of social life. Everything is in flux now.

You as astronomer should watch carefully if the star constellations have changed which I expect now that we have firmly moved into the new Golden Galaxy and have left the old position in the solar system of the Milk Galaxy.

This will be a pivotal moment if we can find out that the sky and the stars have changed. The colours of the clouds these days are fantastic and no longer earthy in the old sense.