The Elohim: This is more than an ID shift – it is a Transgalactic Shift of the earth to a new quantum configuration of space-time continuum 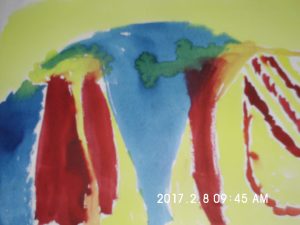 The Transgalactic Shift of the Blue Planet conducted by the PAT, painting by Helga Heinemann, Germany

Tonight I experienced the most dramatic and life-threatening event since I anchored the protuberance field with codes for the understanding of the new Theory of the Universal Law last summer.

Read: August 6th and 7th, 2016: The Creation of the Protuberance Field for the Two Spiritual World Centres in Vancouver, North America and Munich, Central Europe Within Which the New Theory of the Universal Law Will be Introduced After Ascension

Around 2 – 3 am on the West Coast I was hit by the most powerful source wave I have encountered in my 20 years of LBP and purging dark energies while going through more than 100 ID shifts as the nexus to the Source, many of which have been reported on this website. My body elemental went immediately into a survival mode of total hibernation while the shock wave caused an excruciating headache in my right brain hemisphere with a stabbing pain in the right eye socket. At the same time my third chakra of bilocation was also hit and I became very nauseated.

It was the most vicious assault on my physical body from the Source which I have ever experienced. My body was subsequently paralyzed by my HS which whispered in my mind to stay calm and find a proper position in the bed where the pain will be lessened. I remained in this cataleptic state for more than an hour while my conscious awareness drifted away.

When I woke up again in the night the headache had gone by and large and at this moment I heard a very clear voice in my head: “This earth has just ascended“. Nothing more! I am used to receiving this kind of succinct information from my HS when major energetic events occur and I am aware of their critical magnitude. I only get as much as I am able to remember and process at that moment. Throughout the night and in the morning the intensity of the energetic vibrations was off the scale and my body and skin are still burning as if on the verge of being incinerated.

This morning I told Carla about my dramatic energetic experience in the night and expressed my conviction that something very significant in the planetary ascension process must have happened. I told her that in such situations we have always received confirmation and additional information from the Elohim. She felt also very weak from the nightly experience although she could not remember anything consciously. But her skin was burnt a bright red across her upper chest and both sides of her neck.

The reason for that was that she was raptured into the higher realms from where she delivered the necessary primary energy as Elohim of the first cause which then flowed through my fields and triggered this ascension leap of the earth. I know this for certain as after I got the information from my HS that this earth has ascended and slept again I dreamt lucidly of both of us working together on stabilizing the earth’s orbit. I had a clear idea of how precarious and important this energetic work was. This whole experience cannot be even described in words as it is transhuman.

I just talked to Carla who had a meditation and she told me that she has received a short message from the Elohim that confirms this massive shift. They have assured her that it is bigger than the usual Interdimensional shifts (ID shifts) we have had in the past and have reported on numerous occasions. This was a Transgalactic Shift of this earth into a new space and time continuum with completely new physical characteristics and quantum energetic configuration. My immediate intuitive knowing was, while Carla was reading the Elohim message to me, that this planet has now firmly moved into the new Golden Galaxy, which we, the PAT, created more than two years ago, and has therefore left its previous galactic position in the old solar system of the sun.

Read here: The Elohim: The Seeding of the Golden Galaxy, September 6th, 2014

“First, infinite timelines are cleansed [Here, they are referring to your surgical procedure and all medical treatments incurred over the ages, see also this Elohim message, note Carla], as carried out by you and many other light warriors, as you move seamlessly and effortlessly into lower energetic representations  [our experiences over the past two weeks, where we have cleansed deep seated patterns of greed, financial exploitation and state interventions into private human lives] and exchange old energies with the new, highly frequencial energies of the New Earth, through pure alchemical reactions. This is a necessary step before all timelines are ready to be separated within the context of the inter-dimensional split.

Secondly, the lifting of the upper, energetically resolved timelines was a very beautiful moment that many light beings were party to [See Energy Report of September the 5th ]. The representatives of the Shamballa civilization held you in a strong telepathic connection to enforce the energetic bond, the linking of their platform from the sixth dimension, to yours here in the upper fourth dimension. As you were pulled up in frequency, you then began to also draw timelines from below you, up into the new expression of the Golden Galaxy.

As you lifted up these timelines, you also lifted light warriors and their corresponding timelines. Each light warrior represents one timeline and each of these timelines is different from any other. Members of humanity, who are not part of the ascending group, are being separated out at this moment, to take their place in timelines of their Soul’s choosing, where further commitment to the evolutionary process arises.

The light warriors of the New Golden Galaxy, who rose up in this magnificent event, hold the purity and perfection of the Christ Consciousness, and it is their destiny to realize full success as the new seeds of the Golden Galaxy.”

A year later, end of October 2015, the PAT, who are the new Guardians of the Golden Galaxy and the new Gaia template in this galaxy, accomplished the first ID shift of the earth to her new position:

Read here: The Elohim: The Last Supermoon Portal on October 26th/27th Marks the Transition of This Uppermost Mother Planet into the New Golden Galaxy

“We are the Elohim and we greet you today with news that there is an ongoing transition from one holographic reality to another.  This event is driven by the light warriors of the first and last hour through the process of densification, or compaction, of  photonic light into the elementary particles of your physical and ethereal bodies, to the extent that all of you are increasing your light quotients to the utmost parameters during this transition.

This is a massive shift which began one moon cycle ago [with the September Full Moon portal of September 28th] and it shall continue to flood photon light coming from the primary fields of creation.  Indeed, as your light quotients grow in leaps and bounds know that you are drawing with you into the new golden galaxy, the uppermost hologram to which you adhere. The hologram which is being lifted is beginning to anchor into a New Earth hologram and it is this expansion that was shown to you in your dream state for easier understanding and so that you would be able to share this truth with the others.”

However, only today has this earth firmly moved into the new 5D space-time continuum of the Golden Galaxy that affords also a complete transformation of the quantum energetic configuration of all material forms. I assume that we shall begin to witness many miraculous events very soon that will give testimony to this entirely new energetic constellation of the earth.

And here is the message of the Elohim on today’s Intergalactic Shift, which Carla received a few minutes ago:

Much love to all!

” The Earth is fragile in this moment as it has ascended not just in frequency but also in frequential patterning that has resulted in a vast transdimensional translocation.

By this we mean there has been a hyperspace projection, a leap into a new transdimensional frequency, and pattern.

Part of the ascension process requires elements of form to move into a different expression/frequency via a hyperspace projection, while in form.

It is a Transgalactic shift.“