Do not worry, I have decided to keep my reports on financial and economic topics concise and up to the point. But we cannot fully refrain from such discussions if we must be up to date as to what is happening on the ground and to know when the Orion house of cards will begin to crumble full force. And the good news is that it has already started.

I am not sure how many of you remember how the 2008 financial crisis began, but my memories from that time are still very vivid. It began not in the USA but in GB in the fall of 2007 when the third biggest mortgage bank Northern rock collapsed and shutdown its branch offices. The investors built huge lines to get out their money. In vain! 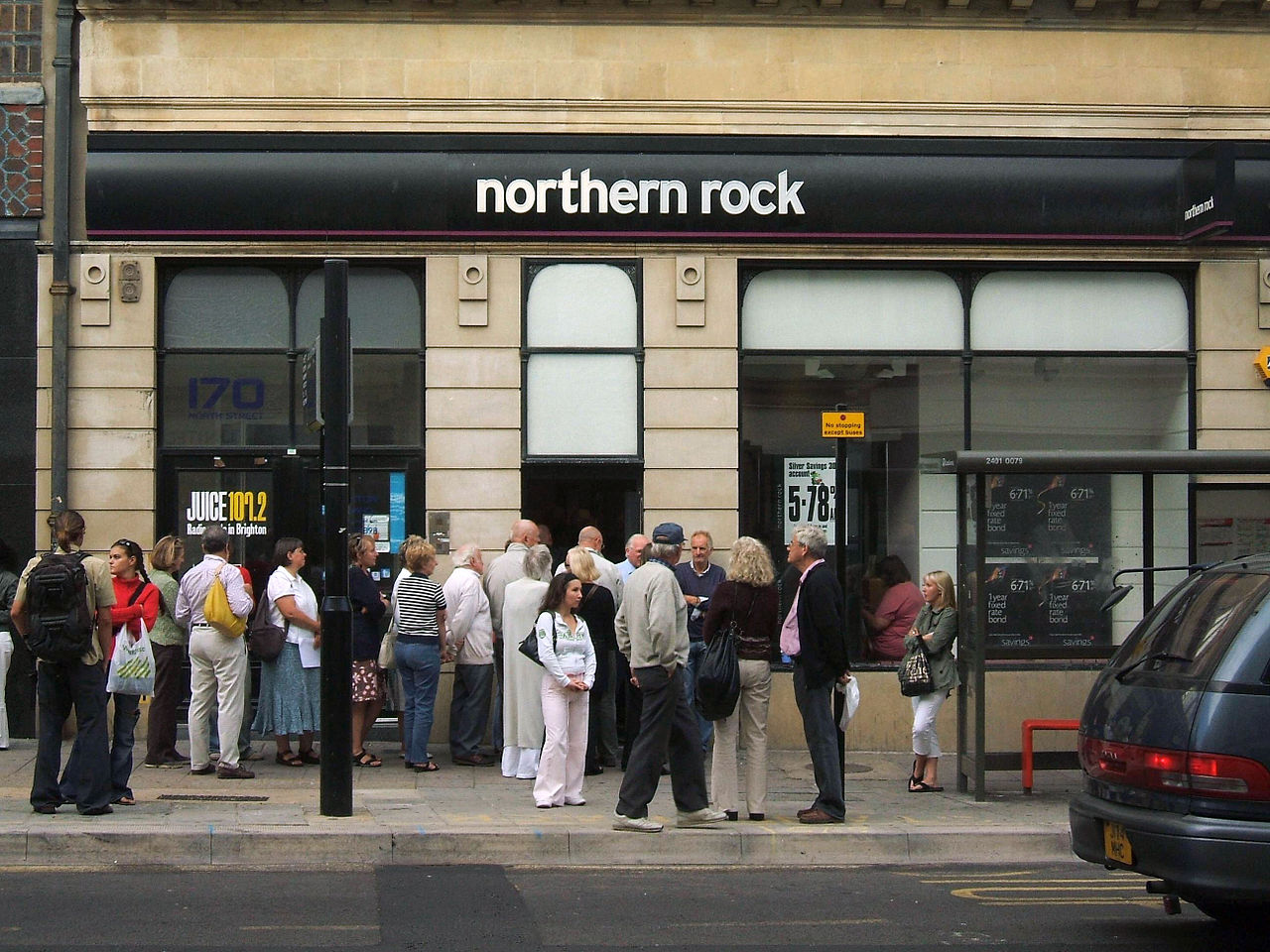 In 2000 Northern Rock gained promotion to the FTSE 100 Index. On September 14, 2007 Northern Rock which had borrowed large sums of money to fund mortgages for customers and needed to pay off its debt by reselling (or “securitising”) those mortgages in the international capital markets faced a massive liquidity crisis as the demand for securitized mortgages had fallen. This sparked fears that the bank would shortly go bankrupt and prompted customers to queue round the block to withdraw their savings. It was the first run on a British bank for 150 years. The bank was de facto bankrupt and was nationalised by the British government in early 2008 after all hopes that another bank might take over Northern Rock were shattered. Several years later it was bought pro forma by another bank and immediately liquidated after more than 2 billion pounds tax payers money were lost to save this bank. I remember the panic at the financial markets at that time and expected this crisis to extend into a global conflagration as this indeed happened in 2008.

Nine years later we have the same scenario. In an episode painfully reminiscent of Northern Rock and the Bear Stearns hedge fund “freezes” that preceded the bank’s 2008 collapse and the great financial crisis, first the UK’s Standard Life halted trading in its property fund, followed hours later by both Aviva and M&G which likewise announced they are suspending trading in their own portfolio funds. As Bloomberg summarizes, three of the U.K.’s largest real estate funds have frozen almost 9.1 billion pounds ($12 billion) of assets after Britain’s shock vote to leave the European Union sparked a flurry of redemptions. These are the first major dominoes to fall as a result of the confusion resulting from the Brexit vote. M&G Investments, Aviva Investors and Standard Life Investments halted withdrawals because they don’t have enough cash to immediately repay investors. About 24.5 billion pounds is allocated to U.K. real estate funds, according to the Investment Association. This means that more than one-third of all real estate funds in the UK are now frozen.

The market reaction has been swift and brutal, sending stocks of the property-linked asset managers crashing.

This all happens at a time when everyone is finally beginning to panic about Italian banks that are irreparably broke. Since the beginning of the financial crisis in 2008 the biggest danger facing European banks has been: non-performing, or bad, loans.

At that time the total amount of bad loans was estimated to be more than 500 billion euro. Since then the situation has gone from bad to worse. At present only the Italian banks have estimated between 400 and 500 billion euro bad loans which is many times more than their alleged capitalisation. After the EU was reluctant to help the unelected Italian PM Renzi save the Italian banks which according to experts and his own admission will not survive until this fall, the nerves are now blank and a full-fledged controversy has exploded between him and his countryman Mario Draghi, the current head of ECB as Reuters reports:

“Italian Prime Minister Matteo Renzi criticized ECB Governor Mario Draghi for not having done more to resolve Italy’s banking woes when he held a key Treasury job in Rome in the 1990s. Renzi’s rare public criticism of Draghi came on the day Italy’s third-largest lender, Banca Monte dei Paschi di Siena (BMPS.MI), said that the ECB had asked it to cut its bad debts by 40% within three years, heaping more pressure on Rome to stabilize its banking system. After taking power in 2014, Renzi’s government introduced reforms aimed at strengthening the country’s cooperative banks, but several are struggling to stay afloat and a bailout fund took control of Veneto Banca last week after the ECB said it had to raise capital or close.

“If the measures concerning the cooperatives had not been taken by us but by the centre-left government that first put them forward, but was not strong enough to enact them in 1998 … then we would not have this problem,” Renzi said. The prime minister said that Draghi was director general of the Treasury at that time, with Carlo Azeglio Ciampi serving as economy minister. “And if people had the strength and intelligence to keep politics out of the banking system a bit before we did it … we would not have had cases like Monte dei Paschi di Siena,” Renzi told a meeting of his centre-left Democratic Party (PD)”

The cabal is now in a full disarray and the Diadochi fights have commenced with full force on both sides of the Atlantic. According to ZeroHedge the banking situation in Europe is crystal clear:

“The bottom line is that at its core, it is all simply a bad-debt problem, and the more the bad debt, the greater the ultimate liability impairments become, including deposits. As we answered at the time – the real question in Europe is: how much impairment capacity is there in the various European nations before deposits have to be haircut? With Periphery non-performing loans totaling EUR 720 bn across the whole of the Euro area in 2012 and EUR 500 bn of which were with Peripheral banks.”

Now, three years later, the bomb appears to be on the verge of going off (or may have already quietly exploded), and nowhere is it more clear than in an exhaustive article written by the WSJ in which it focuses on Italy’s insolvent banking system, and blames – what else – the hundreds of billions in NPLs on bank books as the culprit behind Europe’s latest upcoming crisis.

As “all good things are three” ( alle gute Dinge sind drei), to quote a German saying, we should not forget the ailing Deutsche Bank in Germany. On June 29, the IMF stated that “among the [globally systemically important banks], Deutsche Bank  appears to be the most important net contributor to systemic risks, followed by HSBC and Credit Suisse,” as reported in the The Wall Street Journal. To this finding the IMF adds: “In particular, Germany, France, the U.K. and the U.S. have the highest degree of outward spillovers as measured by the average percentage of capital loss of other banking systems due to banking sector shock in the source country.“

This Wall Street Journal chart shows that Deutsche is inextricably connected to many important banks around the world, including all of the most important banks in the U.S.:

For two years in a row, the American unit of Deutsche Bank has failed the Fed’s stress test, which determines the ability of the bank to weather another financial crisis.

Here is a leverage of Lehman vs. Deutsche Bank:

In 2007, Lehman had a leverage (the ratio of total assets to shareholder’s equity) of 31-to-1. At the time that Lehman filed for bankruptcy, it had $639 billion in assets and $619 billion in debt. Still, it caused a systemic risk worldwide.

In comparison, Deutsche Bank has a mind-boggling leverage of 40-times, Facing an illiquid credit market limiting Deutsche Bank’s ability to deliver and with core profitability impaired due to negative interest rates, it is hard to see how Deutsche Bank can escape this vicious circle without raising more capital. The CEO has eschewed this route for now, in the hope that self-help can break this loop, but with risk being re-priced again it is hard to see Deutsche Bank surviving.

Why Can’t the European Central Bank save Deutsche Bank?

The nominal value of derivatives risk that Deutsche Bank holds on its books is $72.8 trillion, according to the banks’ April 2016 earnings report. What is astounding about this, is that a single bank owns 13% of the total outstanding global derivatives, which was a staggering $550 trillion in 2015. What is more alarming is that the market capitalisation of Deutsche Bank is less than $20 billion. Although the nominal value of derivatives exposure does not mean that Deutsche Bank will have a default worth trillions of dollars, as most of the contracts are covered by counterparties, when the domino effect is put into motion, it can engulf the entire world overnight as we have already witnessed in 2008. If the domino effect does occur this or next month, Germany with its GDP of $4 trillion or the EU with a GDP of $18 trillion will not be in a position to gain control over it and the collapse of the Orion matrix is certain.

In the meantime with each day DB reaches a new fresh record low of its stock price and follows in the footsteps of Lehman Brothers: