The 11.11 portal began actually more than a week ago. Since then we experienced a massive flooding of Gaia and this uppermost mother planet with photonic energy from the source. The goal is the unification of the energetic structure of the earth with that of All-That-Is before the final ID shift can occur. Huge pillars of light, which are interdimensional portals, were inserted into Gaia’s crystalline grid. They look like the spikes of transmembrane proteins that protrude out of the capsule of a virus as shown on this picture. 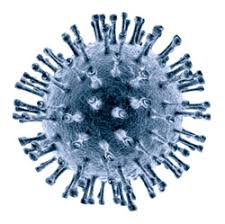 At the same time this uppermost mother planet was fully embedded into the new Golden Galaxy.

How do I know this? Yesterday in the afternoon the Arcturians came to us and gave us this oral information, which Carla summarized as follows.

Unification of your I Am Presence – the Holy Spirit of Creation – with your body/mind/spirit system.

This is not only the  complete unification at the level of your souls, all of your multidimensional soul aspects in different realities (by this the Arcturians implied our simultaneous manifestations in Arcturus, Pleiades, Sirius, etc.). This also means the unification of Gaia with the Whole, her full connection to her new level of expression within the Golden Galaxy. This is a complete integration of the crystalline light pillars that you have now inserted into her crystalline grid and into the core of her body.”

The Arcturians urged us to go to the Infinity portal and receive these new codes of unification for their further dissemination. It is the first time that the Arcturians have come to us. But they are responsible for the 11.11 energies and this portal each year since we opened the stargate 11.11.11 four years ago. At that time they approached me and the PAT through Suzanne Lie and gave her some messages for the PAT. This explains their sudden appearance yesterday. Before that Carla was receiving information from the Elohim on the nature of this or any other portal from an energetic point of view, but the connection was interrupted when the waves hit us very hard.

That is why I am speaking in this report of the Head of Janus of this portal, referring to the first silent horror film “Der Janus-Kopf” from 1920 conducted by the famous German director  F. W. Murnau. The film was an unauthorized adaptation of Robert Louis Stevenson‘s novel The Strange Case of Dr. Jekyll and Mr. Hyde.

The portal actually began early this month and some of you have reported about the constantly growing intensity of the source waves. There was one pronounced peak around November 5th. Then two days before 11.11 the energies peaked one more time and I had non-stop cc-waves for 48 hours, day and night, which is unique even in my long career as chief cleanser of human dross. At the end I was so exhausted and depressed that I began to write the following energy report yesterday morning under a severe headache:

“I do not know how you feel but the prevailing sentiment that have today (11.11.) is of being pissed-off. I am pissed-off with the incessant cc-waves which accompany each portal opening. I am pissed-off because I do not want to be pissed-off but have to process the collective energies of pissed-off-ness of the masses only because they reject to open their senses and see the truth of their illusory reality. Instead all these people are pissed off because their illusory expectations no longer match the reality which is now crumbling under their asses. And we have to process their dross because they are not able to do it on their own.

I am pissed-off with all the promises such portals evoke in our hearts only to crash us one more time physically. Since 48 hours I have non-stop waves with a persistent severe headache alternating left and right and not a single elevated feeling in my heart. Am I to be blamed for that? Nope. I remember how pissed-off I was when the 11.11.11 passed by and nothing happened, but only my personal situation deteriorated to a veritable hell in every possible aspect – a family that rejected me for my ascension ideas henceforth, a financial gridlock that still persists, a reality where I felt as foreign body and subsequently rejected it myself, etc., etc. Read one more time all the personal portraits of the light warriors I have published on this website to have a full view of the human hell on this toxic planet.

I did not want to live anymore and created my tumor in the groin which would have allowed me to leave this reality in an honourable manner. But the soul has always a back-up plan. She connected me to my dual soul and gave me a new perspective in life – the proverbial straw for a drowning person to survive the interminable torture of the ascension waves and to continue carrying the burden until the last straw will break his camel’s neck – the light-warrior-camel’s neck dedicated to the cause of All-That-Is.

I have always propagated the honest expression of one’s feelings – be they good or bad – as they come and go. If I am now pissed-off, there must be a reason for that and I will know it soon. I may be that this is the prevailing sentiment of all humans as heaven is now pulling the rug away from under their feet. It may be that there is another postponement in the final ascension. I do not know and honestly I do not care. Because I have a terrible headache now and none of the promised elated feelings this portal was supposed to bring are possible under such circumstances.

On the other hand, I know that the last two ascension portals on September 28th and October 28th  were massive and brought us to a completely new energetic timeline. It maybe that this portal will finish the job even if it may not feel like that at this particular moment.

Since several days I knew that this portal will fulfill only one promise – the invariant and unavoidable crashing of our physical bodies as hapless conduits of source energies without a choice of rejection. Once a light warrior, it is a life-long sentence, where the very word “life” is an euphemism. It is Guantanamo water-boarding to the end, while the promise that Guantanamo prison would be closed has been postponed indefinitely.

What comes next? I do not know, except that the tortures from the Source will continue for us unabated to the very end. I know that there will be ascension and transfiguration and with it we will cease to feel as humans. How is it to feel as a liberated non-human, discarnated being? I honestly do not know for sure, but what I know for sure is that none of the anthropomorphic references other light workers put forward to present their version of paradise have any relevance in All-That-Is and really do not matter.  As I have known this all the time, I have concentrated myself on the virtues of logical, axiomatic thinking and have subordinated all my imagination to such logical rules, even when I have presented the most daring visions of our future as transliminal, multidimensional personalities.

The only thing that will survive our ascension is logic as the human embodiment of the Logos, the Universal Law of All-That-Is. The rest is figments of the human ego-mind to fill in the gaps of the current illusion.“

Immediately after I “ranted out my frustration” my situation improved significantly. The headache stopped and we were able to visit our Infinity Portal under the guidance of the Arcturians where we received the new codes of unification. After that they gave us the aforementioned information, including the confirmation that this portal was a full success and was very powerful indeed and all our pain and suffering have not been in vain.

That is why one must vent out his frustration with the most torturous work a human being can accomplish on this planet, as the PAT regularly does, in order to discharge the negative collective feelings that accumulate in one’s fields as dross energies before their ultimate elimination in the void. I personally felt during the last 2-3 days very poignantly the utter frustration, anger, intolerance, existential angst, impatient insolence that now emanates from the masses, while being flooded with this massive photonic stream of source energies. I assume that you have felt similar negative feelings these days and have been as pissed off as myself. Hence do not hesitate to vent out your frustration too as this is the only effective way to process these low-frequency dark energies and leave them behind us without affecting our spirit.

Fortunately the energetic situation changes so rapidly these days that one can always count on a quick improvement after any such ordeal. Essentially this portal sets forward the work we have done during the portals on September 28th and October 28th, on August 8th and so on, back to the stargate 11.11.11 that weld together the PAT as the global motor of ascension.

I warned in my recent writings that, while this portal will be very powerful, nothing tangible will manifest at 11.11. First, these new energies have to be incorporated and utilized by all humans and by Gaia before the next ID push can take place. I expect now an acceleration in the collapse of the Orion matrix which may manifest in a manifold manner along the well-established cracks on its facade – financial crash and shutdown of the banks, full expression of the Greatest Depression of all times, which is now seen by a growing number of critical experts and can no longer be hidden, a full fiasco of the hegemonic foreign policy of the Empire of Evil, disintegration of the EU under the invasion of the refugees from the Middle East, etc. etc. We have discussed all these weak points of the current system and each one of them has the potential to pulverize the Orion matrix and, put together, their destructive force is irresistible.

I personally hope that our (PAT) situation will improve slightly in the next days as we have moved again to new, much higher vibrational timelines and have shed off a huge chunk of darkness from the collective fields of humanity. As we have now also a massive influx of old souls as walk-ins, many of whom entered this holographic model in the last 48 – 72 hours, we will witness very soon a significant leap in the light quotient. Many more revelations will come out and will transform the society without much resistance. Because these new ideas for the masses – old for us – will be welcome by the new souls and not rejected due to fear-based patterns as was the case with all unripe soul fragments that have now left this timeline.

By the way the unification of Gaia with All-That-Is includes also all kingdoms – the animal, plant and mineral kingdoms – for which we as ascended masters and Logos Gods are responsible. This was another key message of the Arcturians yesterday who essentially did not tell us anything particularly new beyond what we already know, but only confirmed the success of the 11.11 portal in the unification of Gaia and humanity with All-That-Is and the new Golden Galaxy before its final ID shift. We should be now very vigilant the next days and detect any new cracks in the Orion facade that will herald its final collapse.