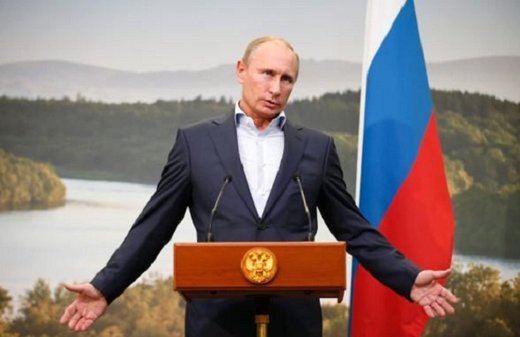 The folks of Vox Populi Evo have pulled through again, providing an English translation and subtitles for Rossiya-1’s latest documentary, PRESIDENT, hosted by Russian TV presenter Vladimir Solovyov and which was first aired in Russia on April 26. VPE had previously made Crimea: The Way Back Home available in English and published on this website.

I have awaited for this video to appear with English subtitles as to publish it for you in order to follow one more time the difficult, though miraculous recovery of Russia after the collapse of the Soviet Union in 1992. Much of this success was accomplished by us as Logos Gods from the higher Realms and could only then manifest in this crumbling 3D reality as a political drama acted by petty politicians. Hence this video should not be interpreted as a glorification of Putin or Russia, but as a testimony how powerful we are as Creator Gods and how precisely we direct the End Time scenario behind the scene.

This documentary contains never seen before footage from some of the biggest highlights of Putin’s career, and of Russia’s history for the last decade and a half: the war in Chechnya, the battle with the oligarchs, the Kursk submarine tragedy, Beslan, the 2008 crisis. Among the revelations Putin makes in his interview sections is the admission of direct involvement of Western intelligence agencies in supporting Islamic terrorism in Chechnya. While it’s no surprise to the alternative media, it’s the first time Putin has officially confirmed such involvement. Nothing has changed since the CIA created the mujaheddin to battle the Soviets in Afghanistan. And at the end there are some miraculous stories which indicate who are the real masters behind this drama:

Episode 2 – Elections. President of a country in decay. Tragedy of Kursk submarine

Episode 3 – Relations between Russia and US. Restoring Russian Economy – Beginning

Episode 7 – Relations with opposition. Bolotnaya protests. Standoff between US and Russia

Episode 8 – Revival of Russian Army. Putin serves his Country. Peoples faith in the President and Country