We have just concluded unanimously that we live in a surreal, bizarre world, where nothing makes any sense anymore and the insanity of the ruling cabal has reached an unprecedented peak. Since the attempted nuclear first-strike attack by the UK and the USA on Russia in the last month as reported by myself, the situation has not settled down. Quite on the contrary – every day new attempts are made by the mad Western ruling cabal to embroil Russia in an unwanted conflict and then to start a nuclear WWIII.

The reason, why these heinous attempts have failed so far, is that we, the light warriors of the PAT and incumbent Logos Gods, have decided to prevent this outcome on this uppermost mother planet. Instead we shall observe a smooth and peaceful transition to the new 4D worlds as given to me in a vision by my HS. But this does not mean that such attempts will not lead to a devastating war on parallel timelines, while we move interdimensionally to higher frequency levels.

Anyway, Sorcha Faal reports today about the latest escalation in the preparation for a global nuclear war carried by the Empire of Evil and its NATO stooges against Russia and the rest of the world. I have always known that this war will include completely new 4D weapons, which the ruling cabal have received from their Reptilian and Greys’ masters and have kept secret so far.

The same holds true for Russia and China that also possess similar weapons. Other countries such as Iran and India seem to have also developed  similar advanced WMD as also reported on this website.

The energetic atmosphere is so heated now that it needs a tiny spark to ignite a worldwide conflagration. As this will not be allowed on this timeline due to its very high light quotient and our decision to prevent any devastating global war, we must reckon with a complete failure of all bellicose efforts of the dark ones to unleash such a war and with the immediate exposition of their crimes. As I have predicted, the chances are very high that this will happen this month. If you also strongly believe this, then it will most probably happen this month

Therefore, read this latest report of Sorcha Faal very carefully, I checked it myself with respect to the quoted references and its veracity with my HS and have received a confirmation that it is truthful, although some of the details given below may have a different explanation. What is undeniable though, is the fact that now the whole Russian army is on high alert for months and that the recent disappearance of Putin was associated with the imminent danger of nuclear first-strike attack of the West on Russia. Since then the danger of a global war has not diminished, but has exponentially increased parallel to the exponentially increasing intensity and vibrational frequencies of the incoming source energies.

By: Sorcha Faal, and as reported to her Western Subscribers

The Ministry of Defense (MoD) in an “urgent action bulletin” published today states that President Putin has ordered over 3 million regular and reserve military forces to their highest alert status, and further ordered the defense-industrial complex to immediately and drastically increase the production of missiles manufactured for air defense and missile defense complexes by 200%, over fears relating to what the MoD calls “unprovoked” attacks upon the Federation by an advanced United States “hypercraft” (interdimensional/space) weapon.

Due to the unprecedented scale of this vast military order, this bulletin says, President Putin earlier today, also, publically warned the Federation citizens by stating: “This year’s forthcoming large-scale checks will encompass all military districts and types of troops.”

Necessitating the urgent need of this historic military action, the MoD says, was an “appearance” over the Federation-protected nation of the Republic of Kazakhstan this past week of an advanced US“hypercraft”, which was captured on video, and deemed by the Kremlin to be an “unprovoked attack”.

Important to note, this MoD bulletin continues, was this past weeks US attack was the second such “incident” of its kind in the past six months, the first being when one of these “hypercrafts” appeared over Yekaterinburg in the Sverdlovsk Oblast on 14 November 2014, and which was then immediately destroyed in a massive counter missile attack which resulted in a near cataclysmic explosion.

MoD experts in this bulletin note that the first recorded “appearance” of this US “hypercraft” weapon was on 17 October 2013 as it was conducting aerial maneuvers near MacDill Air Force Base (MDAFB) in central Florida and alarmed many citizens of this area, many of whom took photographs of its telltale “black smoke ring” vortex contrail. 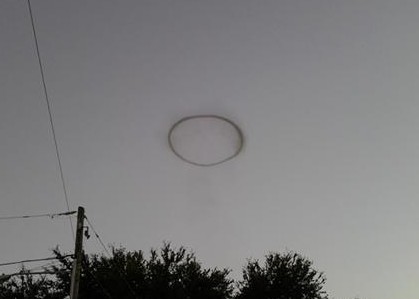 The second recorded “appearance” of this US “hypercraft” weapon, these MoD experts state, was on 13 April 2014 in the skies over Royal Leamington Spa, in the United Kingdom, near the highly secretive US Air Force space communication base at RAF Barford St John where, like the previous year in Florida, its telltale “black smoke ring” vortex contrail was left hanging visibly in the sky.

Enabling the 14 November 2014 shootdown by Federation defense forces of one of these US “hypercraft” weapons over Yekaterinburg, this MoD bulletin explains, was due to the uncovering by MoD scientists of the “supercavitation” propulsion system it uses based upon what is commonly referred to as the “toroidal vortex effect”…which, most simply put, allows a space vehicle to, literally, “swim through the sky”, and, perhaps, interdimensionaly too.

And to how exactly close the Federation-US are to war, this MoD bulletin grimly points out, the Foreign Intelligence Service (SVR) has also reported that their EMP attack against Washington D.C.on Tuesday, which crippled many American government buildings, including the White House, was a “successful retaliation” for a similar EMP attack by the US upon Federation computer servers on 16 March located in Stavropol, in the Stavropol Krai Federal District, and which was captured on video.

Though not mentioned in this report, it is interesting to note that immediately following the SVR’s EMP attack Washington D.C., the US military command that scans North America’s skies for enemy missiles and aircraft announced its plans to move its communications gear to its Cold War-era mountain bunker Cheyenne Mountain base in Colorado designed to safeguard their command’s sensitive sensors and servers from a potential electromagnetic pulse (EMP) attack.