While the Western AAA-cabal (American and Anglo-saxon Assholes) are feverishly seeking for any opportunity to destabilize Russia and oust Putin from power – a futile attempt given the 90% approval rates of Putin at home and the fierce determination of the Russian people to oppose the American aggression in Ukraine and elsewhere -, the upheavals of the people in the West are beginning to peak now. This is a deadly cocktail of popular wrath of the ants and the beginning of the end of the ruling cabal, so that I expect some big events to come this month around Christmas. To this “winter of our discontent” the beginning crash of the equity markets this week which I predicted very precisely a month ago will vastly contribute. On this topic I am preparing a special article this weekend.

Take the money away from the masses and you have a revolution. Their freedom did not seem to matter much to them so far, but even this attitude is about to change very soon when the people begin to discern the close relationship between freedom and true prosperity, respectively between poverty and enslavement.

Below I will quote the major unrest, protest demonstrations and upheavals that now sweep over the Western capitals and show how fed up the people are with the lies of the criminal ruling cabal. This is a representative sample of the major sites of unrest, but of course there are much more and their number will exponentially increase in the coming days. And none of them takes place in Russia, contrary to the hallucinations of the presstitutes in the MSM who substitute reality with their dark, pathological wishful thinking.

Today a “millions march” against police brutality is happening on the streets of America. The reason for this is that the mad and very racist US policemen are killing an innocent black citizen every 24 hours without any accountability (Read also Noam Chompsky on America: “This is a very racist society“).

Protesters are taking to the streets in cities across the US to protest grand juries’ decisions not to indict the white officers responsible for the deaths of two unarmed black men, and demand police accountability (watch here).

Only three days ago a large group people gathered in London at Westfield in Shepherd’s Bush for the so-called “die-in” demonstration. Brutal arrests of 76 persons were made by the police. The protest was in solidarity with rallies in the US prompted by the death of Eric Garner, a black man who died during an arrest in New York in July.

Two peaceful protests were held in west London on Wednesday evening, one inside the Westfield shopping mall and one outside. 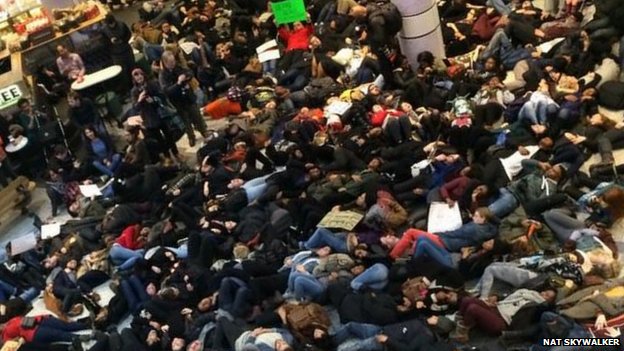 Those staging the occupation were asked to move outside, a request that was peacefully complied with, Scotland Yard said according to BBC. But, according to a statement of the British police, which as the ruling cabal in Westminster is very nervous these days, a “group tried to gain access to the centre of the capital and were arrested on suspicion of public order offences”. For the dark ruling cabal any protest against their crimes, even a walk to the city centre, is a crime in itself, which proves how total their loss of reality perception currently is (read more here).

This also holds true for the Spanish ruling cabal who is overwhelmed by the massive street protests of the impoverished Spaniards against new austerity measures of their corrupt government (several indictments in the last days) and voted a few days ago draconian laws against mass demonstrations. (watch here).

The masses are now beignning to awaken and the dark ones are in desperate retreat as is the case in Athen, where vox populi, the victims of IMF and US banksters have nothing to lose anymore and turned the streets of Athen into battle fields this week.

Only yesterday a general strike paralysed transport and shut schools and hospitals across Italy, the third Mediterranean country in big trouble, as workers protest against labour market reforms. Scuffles broke out between the police and some protesters in the northern cities of Milan and Turin. Rallies took place in all major cities.

The unelected and hence undemocratical “expert” government of PM Renzi is under pressure from his European partners to revive the Italian economy – Europe’s fourth largest – which is mired in recession and laden with huge debt. However, the trade unions say the government’s reforms would endanger job security by making it easier to dismiss workers. The national unrest is Italy is fomented by rapid impoverishment due to massive unemployment, especially among the young generation, which, like their comrades in Spain, have no chance of employment and social acknowledgement (ca 50% unemployment among the Italian and Spanish youth since several years). For further information see here.

Transport services in Belgium have been severely disrupted by strikes protesting against government austerity measures on Monday this week, when all underground trains, buses and trams in Brussels were halted. High-speed trains to France, the Netherlands and Germany were suspended, along with Eurostar services to London.

The strike is the latest in a series of weekly protests that will end with a nationwide general strike on 15 December. Industrial action involving baggage handlers also resulted in 267 departing flights, almost half of the total, being cancelled at Brussels’ international airport (read more here).

The strike has forced Eurostar services to Brussels to terminate at Lille. Services to the Belgian capital will also face similar disruption next Monday. Workers were stopped from entering some industrial areas by pickets, while schools and public services in Belgium were also disrupted. The public sector movement began early last month with 100,000 people taking part in a march in Brussels that ended in clashes leaving 112 police injured.

Three days ago French lawyers, notaries and bailiffs have demonstrated in Paris against new reforms to reduce barriers to enter their highly regulated professions. In protest, they demonstrated in Paris, where they also tucked copies of the French Civil Code into a frieze depicting the 1792 “The Battle of Valmy” (September 20, 1792) on the Republic statue (read here). 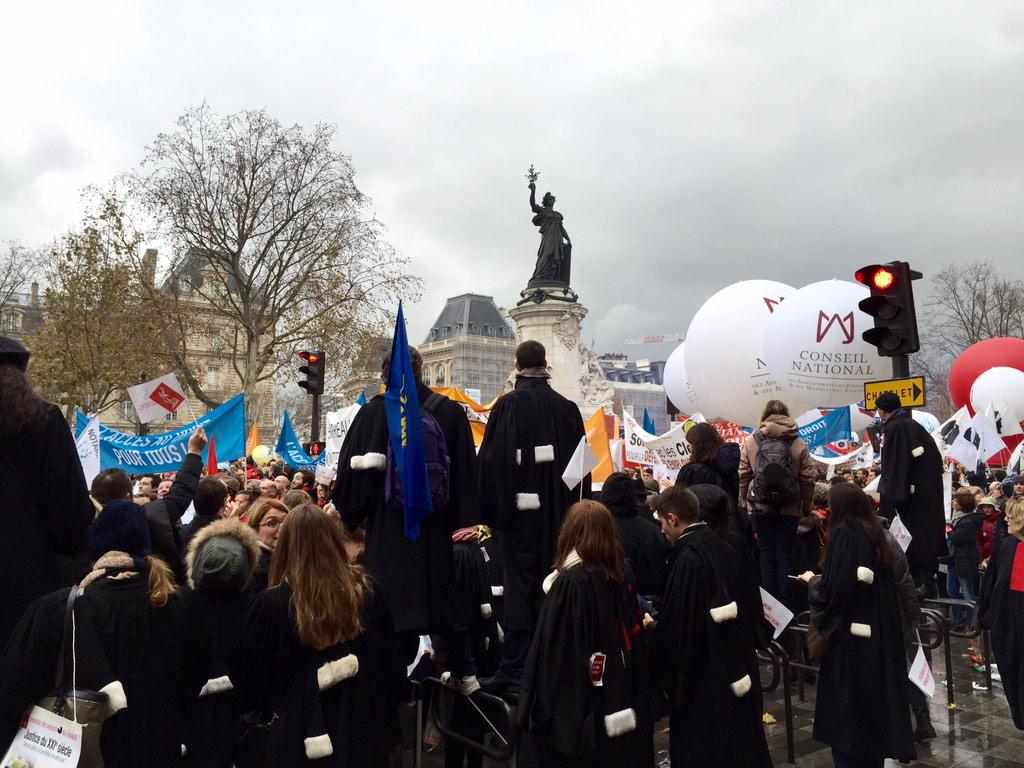 Today tens of thousands of people have taken to the streets in Warsaw to protest recent election results. Law and Justice party leader Jaroslaw Kaczynski says the ballots were falsified with almost 20 percent of the votes being declared invalid.

Kaczynski’s supporters are marching under the slogan “in support of democracy.”

The organizers of the rally claim that over 100,000 people have turned out to protest, which would be the largest demonstration in the history of post-war Poland. However, reports from the Polish newspaper, Wyborcza, say this figure has been significantly inflated. Other estimates have put the figure at around 60,000, the paper adds.

Hi George, You called “Wyborcza” a Polish newspaper. Of course it is of Polish language, but please bear in mind that they are the worst Zionist (Orion) propangada executors in my country. That is why they are always writing that the protesters count is heavily overestimated. Please consider adding remark in your article about what the pro-govt MSM “Wyborcza” really is. 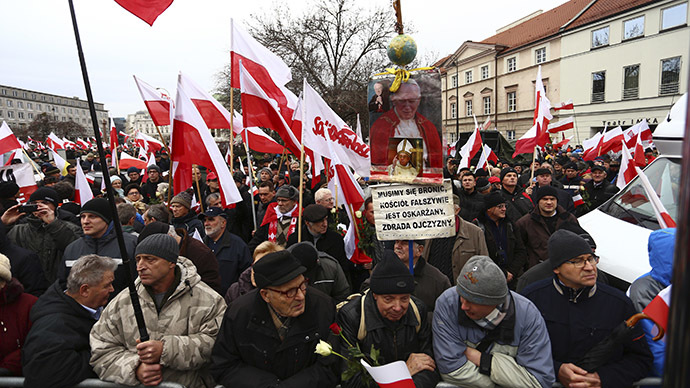 Jaroslaw Kaczynski (C rear below), leader of the Polish Law and Justice (PiS) party, took part in a demonstration march in Warsaw December 13, 2014. He is the twin brother of the former President of Poland Lech Kaczynski who opposed the Western cabal to enslave his country under NATO and EU and was brutally killed by them in an airplane crash in Russland. The blame was put then in a well-established manner on the Russians at the beginning until the lies of the Western AAA-cabal fully collapsed under the power of the facts, which the Russians and many Poles around Jaroslaw Kaczynski furnished. For many months the West infamously blamed Putin and Russia for the death of Lech K. and many members of his government. The controversy was caused by a computer glitch, which delayed the release of results, while many ballot papers were annulled because voters became confused and marked them incorrectly. (read here).

People hold banners reading “Down with Ponta, down with communism”, Bucharest 9 November 2014 [Reuters]

Protests broke out in major Romanian cities after numerous problems stopped thousands of Romanians living abroad from voting in the first round of the presidential elections, Euractiv Romania reports.

25 years after the fall of the Berlin wall, another type of barrier is being brought down in Romania. After countless irregularities and problems prevented expatriate Romanian citizens from casting their vote in the first round of the presidential elections, protests broke out across the country demanding the authorities dismantle the blockade imposed on electoral rights.

Romanians living in the country rallied to support their fellow citizens living abroad. They called on the government to guarantee a fair second round, and to facilitate a common sense procedure that will allow everyone to cast their vote.

The first protest was organised on 2 November, just before the end of the first electoral round. Information coming from social media made it clear that citizens living abroad were stuck in endless lines waiting to vote. In the evening, a small protest was organised in front of the Romanian Ministry of Foreign Affairs, where most participants demanded the resignation of Foreign Affairs Minister Titus Corlățean, and of Prime Minister Victor Ponta.(Read: Irregularities cloud Romanian election runoff).

Please observe that all these upheavals in the West are caused in the first place by the lack of true democracy and accountability of the ruling elite and their stooges that keep them in power and only in the second place by the austerity polices of the neoliberal criminals and banksters, whose aim is to impoverish the masses and to enslave them under the NWO.

All this and much more has happened this week (except in Romania), and this is just the beginning. This survey of mass unrest in many Western capitals and major cities gives you a fair picture of what we shall expect in the coming days and why the ruling Western cabal is so scared now and desperate to unleash an new world war as to suppress the upcoming revolutions of the masses that are already gnawing away the very foundations of their millennial dictatorship over humanity.