Only two days I informed you in my article

“One Step Away From WW3… and the Appearance of the Agarthans”

on the surprising emergency meeting between the French president Hollande and Putin at the Moscow airport. The topic of this secretive meeting was the planned massive attack, most probably with a dirty atomic bomb , on Russia by the criminal Obama regime in order to unleash a new WW3 and install the NWO.

While this spectacular event was completely neglected by the Western MSM, some vigilant Easteuropean observers recognized its paramount importance in debunking the Western narrative that Putin is politically isolated. This wishful thinking of the Western ruling cabal is the most typical symptom of their rapidly increasing insanity, while being flooded by the most powerful, high frequency energies from the source. The latter derail completely their psyche and mind and they are no longer able to perceive this reality and even more so the multidimensional realities we now explore as Logos Gods still in a physical vessel. As an example I would like to quote a “pearl of the day” which I received yesterday from an anonymous Internet troll paid by the dark CIA services to harass me:

“We are “incurable cretins” but we are not delusional…”

Below I am publishing an article from Filip Kovacevic on the Hollande-Putin meeting at the Moscow airport, where he discusses the repercussions of this stunning event from a conventional point of view, but with a lot of understanding of the current convoluted political situation in Europe and worldwide on the eve of a new WW3, which will only happen on lower timelines we incessantly create in the Now.

The Putin-Hollande meeting: Why was Putin in such a good mood? 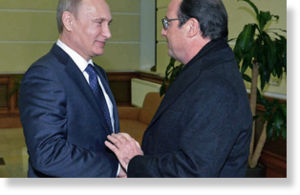 Putin and Hollande greet each other at their meeting at Moscow airport.

After his surprise meeting with the French president François Hollande at a Moscow airport, Putin held an unscripted press conference which lasted a little less than six minutes.1 From the way he smiled when he took the first question, it was clear that, from his point of view, the meeting went extremely well. And it is not difficult to understand why.

Having created a rift among the NATO allies by negotiating a major gas deal with the Turkish president Recep Tayyip Erdogan, Putin believes that he is now able to drive the point home to the warmongering policy-makers in Washington, London and Brussels that major disagreements on policy toward Russia also exist within the European Union. In other words, he sees Hollande’s visit as a major crack in the edifice of the EU’s punitive actions against Russia.

It is worth pointing out that rumblings of discontent about the sanctions were present in the EU almost from the day one. Not long after the sanctions were imposed as a reaction to the supposed Russian involvement in the shooting down of MH-17, for which, to this day, there is not a shred of credible evidence, the Slovak prime minister Robert Fico warned that the sanctions against Russia might “threaten” the expected positive growth of EU economies.2

The day after Fico’s contrarian announcement, the Hungarian prime minister Viktor Orban was even more explicit. He said that the European Union “shot itself in the foot” by imposing sanctions on Russia3. Considering that Russia is Hungary’s largest trading partner outside the EU, it is easy to understand his concern. However, Orban did not stop there. He also promised “to look for partners to change the EU sanctions policy”.

And he soon found them in neighboring Czech Republic.

In late September, the Czech president Milos Zeman also called for the immediate lifting of sanctions against Russia.4 He claimed that they caused “a reverse effect than their authors hoped to achieve” and that, instead, the path of dialogue and cooperation with Russia must be pursued.

Take a moment and have look at a map of Europe. When you put together Slovakia, Hungary, Czech Republic, and now possibly France (add to that Austria & Italy, who are also not too enthusiastic about the sanctions), you get a curious “pro-Russia” geopolitical encirclement of the anti-Russia encirclers (Romania, Poland & the Baltic states). What does that look like if not a huge layer of the EU onion that Putin has already peeled?

However, it is a no-brainer that opposition to the hegemonic warmongers comes at a tremendous cost. Both Orban and Zeman have since come under the intense political pressure from US political figures and their EU cronies. For instance, several days ago the Republican Senator John McCain, who is about to become the chairman of the powerful Senate Armed Services Commitee, called Orban “a neo-fascist”.5 And Zeman was pelted with eggs and tomatoes at the event celebrating the 20th anniversary of the Czech anti-communist Velvet Revolution last month.6 So far these attacks have been symbolic, but who knows what kinds of warnings have been communicated to Orban and Zeman far from the public eye? Not pleasant, I am sure.

And yet, now that Hollande, the president of a key EU constituent state, has broken the so far still ramshackle iron curtain busily put together by the crew of perpetual war-mongers, it will be easier for all the others to chime in and vindicate the early opponents of sanctions.The bottom line is that Russia will not be isolated. It will not suffer the fate of Milosevic’s Serbia (runaway inflation and political disintegration) projected for it by the aggressive neo-conservative Russophobes.

This political message is also very important to Putin for domestic reasons. And it is perhaps that aspect that made him appear so cheerful after his meeting with Hollande. It was only a few days ago in his address to the Federal Assembly that he stressed that Russia pursued the only possible course regarding the political turbulence in Ukraine. That Russia’s vital national interests demanded that it incorporate Crimea and Sevastopol and that the international community would eventually come to recognize those actions as legitimate. In other words, the terrible price that the ordinary Russians are paying at this time in terms of falling living standards will only be temporary and that it is, therefore, a price worth paying.

While the majority of the Russian citizens may agree with Putin, the warmongers still have a lot of tricks up their sleeves. And “many miles to go before they (finally) sleep”.

Filip Kovacevic, PhD, is a geopolitical author, university professor and the chairman of the Movement for Neutrality of Montenegro. He can be contacted via this email address: fk1917@yahoo.com