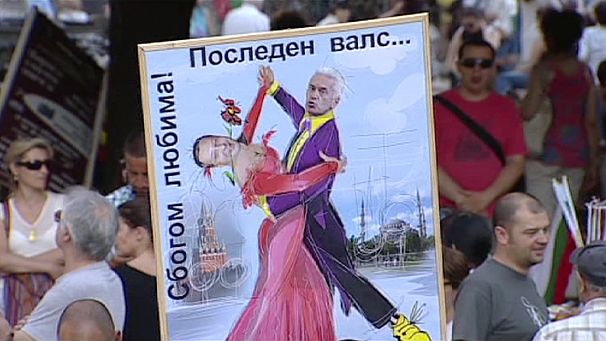 The last waltz. Farewell my darling

According to CIA’s official statistics, Bulgaria’s death rate is the 8th highest in the world. Afghanistan, war-torn for decades, is seventh. Somalia is ninth. The countries in top 7 have gone through sustained armed conflict, famine, genocide, apartheid and a nuclear disaster. Bulgarian went through 23 years of democratic transition.

The above fact hints at a key reason for the mass demonstrations that have marked 2013 and are still drawing tens of thousands of people to anti-government protests day after day: ever since the democratic changes of 1989, life in Bulgaria has been unduly hard.

The contrast they found between their reality and the rest of European civilization was devastating. It still is today – and the protesters are tired of living in limbo. The thirty-somethings of Bulgaria had been silent till now – too busy trying to sort out their careers and families in an evercontracting economy, an environment of growing lawlessness and nepotism. Sometimes, too busy planning emigration. This is their first mass outing, their first concerted attempt at active citizenship – an organized discontent.

Their ranks grew out of several green movements which gained traction in the country since the mid-00s precisely because they offered a politically unaffiliated – i.e. unsullied – outlet for the frustrations Bulgarians had with a long line of resource-stripping, land-grabbing, neglectful and polluting governments. The people protesting in front of the Parliament today feel cheated out of their youth, dreams and hopes: after nearly a quarter century of “change”, nothing in their lives has actually changed for good.

Their formative years were spent in conditions of deepening nihilism – between 1994 and 2012 dabbling in Bulgarian politics morphed from a challenging, ideal-bound job into a bona fide criminal career. Ministries became the front-facing “shops” of the proliferating mafia structures, manned by ousted, but well-connected Communist functionaries, and hundreds of disaffected secret police agents and prospectless young wrestlers and boxers, let down by the sudden loss of state subsidy for their local clubs (such were established in most towns in Communist times).

As children and teens, the current protesters had to endure the doomed attempts of a nascent political scene to generate elites untainted by Communist ties – a near impossibility in a society where access to power was so tightly controlled that there was virtually no other way in. Having actual political experience equaled a compromised background. To illustrate: as of this year, more than half of the currently serving Bulgarian diplomats are still persons with proven links to the oppressive apparatus of the former Communist state security services.

The latest protests were triggered by the same legacy of entrenched, deeply illegitimate power: the snap elections on May 12 produced the current stillborn coalition between the Bulgarian Socialist Party, heir to the seemingly dismantled all-powerful Communist Party, and ethnic Turkish party Movement for Rights and Freedoms, with Plamen Oresharski as Prime Minister.

In its first days in power, the new government, aided by a largely unchanged Parliament, attempted to shoo in one Delyan Peevski as head of DANS – an ill-conceived, yet highly powerful national security structure tasked with investigating organized crime activity. Peevsky is a widely reviled protégé of massive criminal and media monopolies, with a history of being under investigation himself.

This paradox was seen as a monstrous gesture of contempt towards the Bulgarian people: it is one thing to tacitly advance the toxic meshing of democratic institutions and organized crime structures. It is quite another to rub it in the face of a nation that just ousted another primitive and abusive government.

Tellingly, Peevski did not withdraw and the government vacillated before reassessing its decision for over three days, thus demonstrating that the case of DANS is just the tip of the iceberg. The protests now are against the brash, unscrupulous government culture which made such gross miscarriages of political will conceivable. Protesters call for the resignation of the people who genuinely thought they could get away with such a crude display of unaccountability.

The battered dignity of the working, taxpaying, child-rearing generation in Bulgaria now hinges on ousting a government who dared offend so pigheadedly. Tellingly, the government continues to work on making controversial appointments, especially in the roster of district governors, the Parliament continues to vote in hastily drafted laws, as though a serious crisis of legitimacy is not developing publicly on their literal doorstep.

Even the hitherto diffident President Rossen Plevneliev issued a strongly worded speech Friday, calling for the government to acknowledge the legitimate demands of the protesters and urged the planning of new elections. When today’s protesters were growing up, they witnessed the progressive deterioration of vital judiciary, healthcare and educational institutions, the arbitrary change of governments, but not of attitudes and political practices. Each Cabinet appeared more absurd, incompetent and unprincipled then the last. In the late 90s the currency crashed, the shops had no food. The abrupt change from command economy to free market capitalism plunged vast swathes of the population into sudden, shocking poverty, accompanied by loss of dignity, status and security.

Stunned, disoriented and angry, Bulgarians went to the ballot in ever dwindling numbers, mostly to avenge themselves against the latest government that overpromised and underdelivered. Elections became the public executions of politicians and parties, and, finally, of the concept of government itself. This is how, by 2000, the spectrum of democratic, liberal parties that had presided over the early transition ended up pilloried and never recovered.

Bulgarians then voted in a progression of ever odder political entities: from one-man parties such as the National Movement Simeon II, which produced the paradox of installing deposed prince Simeon Saxe-Coburg-Gotha as a republican Prime Minister without formally rescinding his royal claims, and its less sophisticated spin-off GERB, the charismatic movement around strongman Polic Chief, then Prime Minsiter Boyko Borisov, ousted by protests in February this year, to ultranationalist scandal-mongers “Ataka”, busy inciting ethnic hatred against the significant minority of Bulgarian Turks and Roma.

It continued thus until no party, no politician was left able to claim an ounce of decency or respect. This mutual schism in Bulgarian public consciousness, pitting everybody who was in politics against everybody who was not, helped Bulgarian society arrive where it stands today. Party lines, for purposes other than election campaigns, are blurred beyond recognition. Trust in institutions is practically nil, media are openly subservient to the powers that be. The public expects no truth in the news and finds it difficult to arrive at informed opinions, often falling back on prejudice and apathy.

Although the current protests show that the alternative power of social media is beginning to change this, voters still struggle to identify a meaningful, authentic alternative in terms of viable political opposition. As a result, Bulgarians either avoid voting altogether, disgusted with the mere thought of enabling the same revolving set of failed politicians, or go to the ballot not with their future in mind, but to punish, to lash out, to tear down. Everything that seemed new and untried before appeared preferable to whatever current government was in charge, so no Cabinet was actually allowed space and time to see through meaningful reforms. In turn, each successive Cabinet busied itself predominantly with undoing what the previous ones had done and reallocating resources to insiders – a party mandate didn’t mean governing a country, but simply draining it for personal gain and exploiting it as a vast sweatshop.

To quote a recent Reuters publication: “We’re effectively dealing with a Wild West country,” said an EU official who handles east Europe, voicing doubts about Bulgaria’s ability to enforce the law and live by democratic norms”. This stinging judgment echoes ominously for the future of Bulgarian statehood. It indicates the country has exhausted its credit of post-Cold War goodwill in the eyes of its aspirational model – Western Europe.

While in the 90s the West may have been willing to help Bulgaria along, now the country is viewed as a grand nuisance, a baffling liability in the periphery of the European Union. The demonstrators standing vigil in the cold nights of November 1989, shouting “Times are changing! It’s our time!” felt elated. The free world was cheering for them, the Iron Curtain was melting, help was on its way. It was an illusion, ultimately, but it sustained them.

Today, the children of those same protesters doggedly demand the resignation of yet another morally bankrupt government – the attest deformed spawn of a transition whose course was fatally perverted. They stand in the sweltering July evenings on the same yellow-bricked plaza, in front of the same Parliament building. They are here every day, still determined, still inspired. They know times have not changed. They know they stand alone.

Maria Spirova is an award-winning Bulgarian journalist with over 10 years of agency and long-form experience.