In a coordinated anticipation from the Higher Realms of the imminent ascension and appearance of the first Bulgarian Ascended Master, the government of Bulgaria has announced that it is resigning. This was the logical step after nationwide protests and severe clashes with the police took place against high electricity prices and austerity measures, which were recently announced by the Prime Minister Boiko Borisov.

The PM said surprisingly today that he had decided to go, after protesters against rising electricity prices clashed with police again in Sofia. At least 14 people were injured during Tuesday’s demonstrations.

“I will not participate in a government under which police are beating people,” Mr Borisov said and gave the tone for other European heads of state to follow. “Every drop of blood is a shame for us,”

The street protests across Bulgaria – the EU’s poorest country – which began two weeks ago, were initially over high electricity prices but soon took an anti-government turn and spread to a nationwide revolution in the capital Sofia and all major cities such as Plovdiv and Varna. 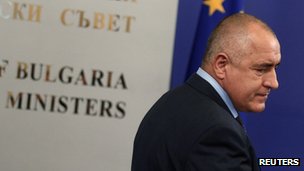 The PM tried to calm the protests on Tuesday by promising to slash prices and by sacking his finance minister. He also pledged to punish foreign-owned power companies that he said charged too much.  But these promises were too little and too late and the clashes on Tuesday were the last straw for Mr Borisov.

Many Bulgarians remain deeply unhappy over high energy costs, power monopolies, low living standards and broad corruption. It is not clear whether or not a parliamentary election scheduled for July would now be brought forward.

“Our power was handed to us by the people, today we are handing it back to them,” Mr Borisov said. “I cannot stand looking at a bloody Eagles’ Bridge (Orlov Most),” he added, referring to a busy intersection in the centre of Sofia that became the centre point of clashes between police and protesters on Tuesday. ”

Many of the protesters in Sofia, Plovdiv and other major Bulgarian cities had demanded the resignation of the centre-right GERB party government and the re-nationalisation of power distributors for several weeks in a row. The government lost support after it abandoned plans in March 2012 to build a new nuclear power station at Belene, close to the Romanian border under the immense pressure from the EU. The plant was built by Russia, which was ready to modernize the nuclear plant, but was banned from doing this by the Orion bureaucrats in Brussels who tried to prevent any Russian influence on the Balkans.

A controversial referendum last month on whether to build a second nuclear power plant was invalidated by a low turnout, although more than 60% of those who voted backed the idea. This decision is now challenged again.

The reason for the resignation of the Bulgarian government is in part because it froze salaries and pensions, while increasing drastically the prices for electricity and other basic commodities. Bulgarians, on average, earn a relatively meagre 800 levs ($550;£356) a month, while the basic prices are comparable to that in rich West European countries.