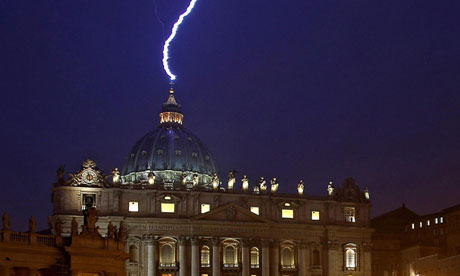 PAThway to Heaven. The ascension of the PAT this week is the “Second Coming of Christ” announcing the end of Christianity and its Orion popes.

About 45 minutes ago there was an enormous shift. I sensed you in the room, as I am able to see out of the whites of my eyes. I have just now completed an enormous supportive role, with the help of Anita in the Higher Realms, to help you complete the final phase.

I also have a short dispensation from the Elohim:

“Beloved, you are most Divine! With the help of your counterpart, you have opened the channel for your Director to complete the final steps for the full opening of the Ascension Path.

This path is now open to all Lightworkers having in their contract the ascension protocol.  The stage is set and all is now prepared for the next phase.

We are the Elohim!”

The room is filled with dozens of Elohim and Golden-White Light, even still now…

What has your experience been within the past hour?

On Monday I went to bed at about midnight and had a deep sleep until 04.00 am CET. The event you have experienced – the enormous shift – must have happened at this time, around 02.00 a.m. CET. I do not remember anything about this.

I woke up at 04.00 from a nightmare. I was somewhere in former Yugoslavia and participated in a massacre of thousands of Bosnian people. I was one of them and woke up from the bullets that were hitting my body. I wanted to die, but continued being hit by the bullets and feeling the pains all over my body. I have no idea why I was participating in this nightmare massacre, but it was a real mass crucifixion. In fact I did not intend to mention this nightmare originally as I do not pay much attention to such dreams, but as you asked me precisely what I have done during this timeframe, I decided to write about it.

I knew yesterday evening that I will not ascend this night and that there are some minor final adjustments to be made before I can do it. Somehow I think that my ascension may be related to Feb 14th when this incentive “one billion rise” on behalf of all repressed women wordlwide will take place. But your information fully fits into my continuous evaluation of the ongoing ascension process. Thank you very much for this information.