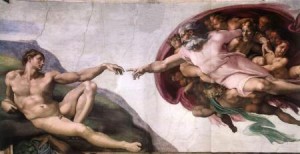 Michelangelo Buonarroti, The Creation of Adam

I would like to confirm that the Venus transit was accompanied by a very powerful wave. It commenced for me on June 6 with a highly penetrating, biting frequency that made my whole skin burning and feeling as a parchment. This kind of wave is associated with an increased diuresis which proves its deep penetrating and transforming character that affects all cells up to the DNA and the supracellular, quantum level (see volume III for details).

During this day and night, I had to visit the toilette more than 20 times, almost each half an hour at the peak. I calculated that I have effectively lost within 24 hours more than 5 litres nett body water, when I consider the liquid intake during this day. This kind of wave causes a huge stress on the whole body metabolism and debilitates the person maximally. My interpretation, which I have already published in the past on a similar occasion, is that the June 6-Venus transit caused a huge transformation of the carbon based bodies to crystalline light bodies, which will have less water content. This transformation was anticipated in my dream which I published several days ago.

On June 7, I had the most powerful commotio cerebri wave with an excruciating headache, similar only to the one during the opening of the powerful portal May 13/14 in preparation for the sun eclipse on May 20. This date was also announced by myself in a previous ascension report as received by my HS in a lucid dream state. The commotio cerebri waves are associated with a massive descent of high frequency energies in the body field of the incarnated personality and lead to a subsequent increase of its ascension levels as measured by the number of octaves. We have also discussed this topic in our ascension report when Wilfred from South Africa addressed this issue.

For instance, the crystalline grid of the earth, which is now operating in full power after the opening of the Full Moon Portal June 4-6, has the octave of 144, hence the term “144-grid“. This is the universal frequency of creation in All-That-Is and is equivalent to the frequency range of the highest levels of the 5th dimension, where most advanced souls dwell in an excarnated state and have the unlimited power to create within the 5th and lower dimensions. This level is also known as Celestria in the esoteric literature.

Of course there are higher octave levels of creation than the 144-octave and they belong to the 6th – 12th dimensions of this universe, where most of you come from and will ascend very soon. If you remember, Wilfred told us that his Higher Self had informed him that he had reached the 300-octave early this spring.

I was told prior to October 13, 2010 when I first ascended in ethereal body and spirit (as announced by my HS at least 20 times since April 2010 but then had to return back on the earth because humanity was in a huge retard) that I had reached the 144-octave in September 2010. Since then, my octave level has been increasing at an average rate of 10 octaves per month, as this was announced one more time by my HS in early 2011. This information fully coalesces with that which Wilfred has received from his HS.

As you all know, since the summer of 2011 the pace of acceleration of the LBP is  steadily growing and, after the opening of the portal 11.11.11, it began to increase exponentially. I am giving you these unique figures so that you can gauge the state of your LBP and the level of your frequency increase in order to be able to estimate the dimension(s) of your individual ascension. You may as well ask your HS for more information and I am confident that you will receive some kind of an answer. Not that these figures matter much, but they give you some quantitative background as to how advanced you are currently in your LBP.

I have often observed in our previous discussions that some members of the PAT confuse the level of LBP progress, upon which the level of ascension also depends, and are happy if they can ascend to the lower second level of the 5th dimension, where earth A will reside. I must repeat  again and again: This level is preserved for the 1.75 – 2 billion adult and old souls, who have still no idea of their destiny at the end of this year and have just entered subconsciously the first intensive stage of their LBP. Their body transformation will be much less invasive and profound in the coming months as the one you all have already experienced. However, these ignorant souls will still qualify for the acquisition of a crystalline light body that will allow them to ascend with earth A to the lower 5th dimension on Dec 21,2 012.

If you closely read all the recommendations of the channeled sources on the Internet with respect to the physical symptoms and effects which the latest energy waves cause in most human beings, you must immediately discern that they all relate to the masses and to those LW, who have just started with their LBP. These messages and advices from various channeling sources from the lower 5th dimension have absolutely no relevance to your personal experience, as you are much more advanced in your LBP. It is very important to keep in mind these crucial difference as to avoid any confusion or even to allow to be discouraged by some negative information, which some of you avidly read on the Internet.

You – all true members of the PAT – who have gone through the stargate 11.11.11 and have fully opened your heart chakra have already ascended to the highest 5th dimension on November 22, 2011, as extensively discussed in our ascension reports. Since then you have moved to much higher dimensions and have reached frequency levels, from where the Elohim operate, as Carla’s message has recently confirmed. This is the reason why you will be the new Earth Keepers and Creator gods of the earth A and the balanced earth A/B.

In fact we are already these creator gods, but now this truth must deeply penetrate your consciousness and growing multi-dimensional awareness shortly before your ascension. Please observe that your MOS (multidimensional operating system) was installed on November 20, 2011 and is now fully operative. The rest of the LW and star seeds received their MOS only on May 20 and it will be fully operative around summer solstice. This is the big difference between you and the rest of humanity, which you must always consider in your thoughts as not to get lost in the growing confusion in these last days prior to the inter-dimensional split.

Please keep in mind that all channeled information you read is meant for the gross of the light workers and a small part of the masses that has just started to awaken and has absolutely no relevance for you, as YOU ARE THE BIG EXCEPTION. Just take as a rule that all people that now channel, be they Ute, Sue, Greg Giles, Berlinghof, Wes Annac, etc. on the Internet, can do so only because they have not yet entered the last and most intensive phase of the LBP, which you have almost completed by now.

The exact determination of your spiritual “standort” (position) should be the basis of your inner confidence that you will soon ascend and be the first human transliminal souls of this humanity, Thus you will soon become the true representatives of All-That-Is. You will incorporate all frequency spectra from all dimensions – from the 3rd to the 6th and higher dimensions, up to the Source, and you will soon begin to act as creator gods from a level that is incommensurable to our limited human perceptions and minds.

Therefore, THINK BIG AND LIVE CALM  through the last remaining days on this planet. There is nothing that can harm you anymore or can alter your glorious awakening as powerful multidimensional personalities.