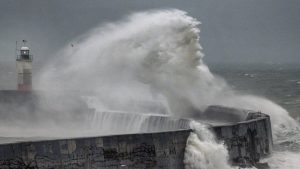 Yesterday I opened with my article on the Shift and our Ascension a huge gateway to heaven and the ascension process was ramped up one more time if this is possible given the already maximal intensities of the incoming waves from the Source.

A major topic of my discussion in this article was the inevitability of massive terraforming events during the Shift that will enable the retrieval of millions of incarnated human souls who are not ready for the massive changes and prefer to leave the earth and this incarnation with physical death experience.

Today, the gestalt of Poseidon, the Greek God of the sea, storms and earthquakes appeared on the East Sussex coast, England during stormy weather. His Roman equivalent is Neptune.

Poseidon is also known to be “The Earth Shaker” and this is what the Shift will bring in the coming days, first with our ascension that will shake the world view of humanity and then with the terraforming events caused by the MPR (magnetic pole reversal) as I have been experiencing it for a decade on numerous lower timelines that have been separated from ascending Gaia and have gone under in the process of planetary ascension.

In Homer, Poseidon is often called “Earth Shaker”. He was considered to be a god with a bad temper and Odysseus knows this better than anyone else. He provoked Poseidon’s fury by blinding his son, the Cyclops Polyphemus, resulting in Poseidon punishing him with storms, the complete loss of his ship and companions, and a ten-year delay to return back home in Ithaca (in the Odyssey). The ancient Greeks believed that when Poseidon became angry, he would hit the ground with his trident which caused earthquakes.

Such wondrous appearances never happen by chance but always symbolize major fateful events in order to impress and prepare the masses for their future ordeal.