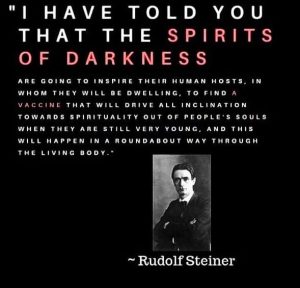 How is it possible that a mildly mutated strain of the SARS-2 scientifically-classified virus has virtually suspended the economic and social-personal activities of an entire planet with ramifications which are approaching conditions of a genocidal consideration while the minions engaged in this misleading and consummate evil are heralded as saviors of humanity ?

The consummate absurdity of such a viral complex is simply a most depraved and egregiously false narrative as attested to by Dr. Georgi Stankov’s disquisition, Why There are no Viruses, The Usual Blunder of Fake Science.

“ In this case, scientists have falsely labeled normal physiological cell vesicles as distinct species – as “viruses” – and have proclaimed the utterly wrong idea that viruses are dangerous biological agents that make people sick and kill them. This has nothing to do with real biological regulation and is fake science.“

Thus, a new scare tactic has been unleashed as a social doctrine of genocide, termed “Virusism“.

If one adopts the position that this calamity is simply a result of the dumbing-down of humanity, we are still left with the dilemma as to how an educated assembly of medically-trained professionals, entrenched hospital managerial bureaucrats and many other entities in the supply chain of a modern medical establishment remain in total subservience to a grotesque and egregious acceptance of the HOAX OF THE CENTURY. Prudence calls out that one must look beyond the obvious and conclude that something far more sinister and invasive is at hand.

As one who has reviewed the ancient civilizations replete with the many cultural traditions, folklore tales and myths of divine beings who often are characterized with human frailties abound, the full extent by which Covid-19 has blindly been accepted by the mass of humanity can be metaphorically examined with a certain extrapolation as a “SPELL “ UPON THE HUMAN CONSCIOUSNESS. Of course, spells often conjure up the activities of divination, black magic and sorcery.

SORCERY DEFINED: According to the Free Dictionary, Sorcery can be defined as encompassing a vast arena of unnatural activities including black magic, summoning of evil spirits and to induce predetermined events or inciting unnatural effects in the world.

For the sake of brevity, I will focus on the CONSEQUENTIAL EFFECTS and how the Covid-19 complex with regard to its perception, WHILE wholeheartedly BELIEVED by the masses of humanity and the willingness to alter normal social conditions and human interaction by submitting to the prison-like paradigm, CAN, in a comparative and metaphorical simile, be likened to a SPELL.

The contrived scenario and repetitive onslaught of lies, distortions and outright fraud has induced a collective mindset of CONSUMMATE FEAR in many who choose to believe in the EFFECTS and THUS sacrifice their better judgment and soul-inspired intuition to the altar of wanton credulity. The Faucis and Gates of the world and MSM networks are in essence acting as Sorcerers AND if we can extrapolate their fear-driven rhetoric to that of actually conjuring up occult and negative energies, 24 x 7, THEN, yes, indeed, the Covid-19 paradigm has opened a modern-day Pandora’s Box.

In the classic Dante’s Inferno, we read the following allegorical elucidation “Justice incited my divine Creator; Created me divine Omnipotence, The highest Wisdom and the primal Love…” These words that appear over the entrance to Hell and famously end with “All hope abandon, ye who enter in!” indicate that the Divine was compelled by justice to create Hell.

It is interesting to note that Dante refers to humanity as a being created with a divine omnipotence or knowingness, the highest wisdom and the highest primal love of truth is sacred-bound to being a human being. How does such a revelation assemble in the belief of many to the credence of the Covid-19 spell ? Each has to answer to that conundrum.

This answer raises some important questions which in turn lead to interesting answers. Let us start by looking at the content of Mephisto’s utterance with a quotation from Peter Baumann:

“The expression “evil” (or “to do evil”) refers to the object or content of the will. Mephisto is thus not saying merely that his will is directed towards something which turns out to be evil but rather that he wills the evil as evil.

Related to this is another important point. Mephisto’s will is evil because he wills that bad things happen; it is not evil, say, in a Kantian sense: because the will’s maxim has a certain form. Furthermore, Mephisto attributes to himself what one can call an “evil will”. What Mephisto Is Saying:

Rather, we should interpret him as either characterizing the consequences of each of his actions as predominantly or overall good despite being willed by an evil intention.

“Part of that force that always wills the evil and always produces the good. On a Devilish Incoherence”, PDF, Peter Baumann

Paradoxically: Are the Sorcerers in our Midst conveying that Vaccinations are a form of bringing about the good? I, for one, emphatically deny this aspect of goodness as the entire vaccine regimen is ill-conceived, vastly misunderstood as to its Potential Effects and driven by financial gain rather than a benign treatment for serving humanity.

All verbal expressions are Energy in Motion and those, who falsely position their personal status while knowingly engaging in conjuring up the effects for their own self-aggrandizement, ARE in a certain sense acting as a demonic effector or Betrayer of Humanity.*

WE are OBSERVERS of the SPELL IN OUR MIDST. From now on, I hereby label the SORCERERS IN OUR MIDST as discussed in the above-referenced disquisition.**

* Such dark individuals as Fauci and Gates are genetic and karmic carriers of the Atlantean energies of treason and betrayal. For further information read here.

** However, as everything that we experience is of dialectical nature as Goethe understood better than any other thinker while creating Mephisto’s personality in his famous book “Faust”, the current scam around the coronavirus lockdown has a positive dialectical aspect when regarded from a higher vantage point of view. It is the least violent alternative for an ascension scenario that enables the rapid opening of the human chakras under the condition of total social immobilisation and retrieval from meaningless activities within the 3D illusory matrix. Thus, while the COVID spell is real sorcery within the 3D matrix, it is eliminating at the same time the spell of the 3D illusion, to which humanity is currently subjected and thus promotes their awakening and future ascension into the bliss of the higher dimensions. Therefore, dialectics is a circumscription of the always benevolent nature of All-That-Is, even when it creates local evil with the only purpose of making the incarnated, separated from their souls human beings aware of their everlasting connection to the Source and All-That-Is.

This is the dialectics of human life which Goethe has so ingeniously grasped: “Part of that force that always wills the evil and always produces the good.”  In order to find out how this works in the current lockdown, read Georgi Alexandrov Stankov’s article: Higher Dimensional Approach to the Coronavirus Scam.