I have stopped following the stock and financial markets almost 4 years ago as they are unreal. What is the purpose of dealing with the phantasmagoria of the dark ones whose only goal is to delude the people and force them into lower vibrating timelines of total chaos and confusion in order to prevent the planetary ascension? One should always avoid the dark narratives these rascals constantly impose on humanity as this is how they control the masses. The once brilliant and very critical Zero Hedge website, for instance, has swallowed these lies of the ruling banksters hook, line, and sinker and has devolved into another embarrassing fake MSM outlet.

The only exception was the recent publication of the ingenious article of Brad on the current financial situation which he follows for professional reasons. In fact, his review is the core revelation of the Zionist agenda to enslave humanity and has thus an eternal validity beyond the current financial madness he also very professionally describes as to make a point. He is a champion of precious metals in the interim period of financial transition when the shift will come and the inflated fiat currencies will rapidly devaluate, that is to say before the Astral currency and the INFER can be introduced. However, I am not so sure if humanity will have the time to enjoy the high prices of gold and silver which will prevent their practical application as broadly used exchange currencies because when the changes once start, they will roll like an avalanche.

That being said, I didn’t even register that the US stock markets (Dow Jones and S&P) have plunged in the last three weeks of September roughly 8% from their all-time high on September 2nd, which is the beginning of a bear market the like of which no bankster has ever seen. Therefore, I was surely not biased while receiving the higher-dimensional announcement in the dream state this night about which I shall report below.

The only information that might have influenced me in this direction was Pepe’s dream which he shared with me yesterday evening:

“I wanted to share with you a dream I had a few nights ago. I saw a huge angel in the skies and he was completely covered in violet color (violet flame I presume?), with a raised right hand – much like a statue of liberty – holding a sword pointing upwards. I immediately urged all the people around me to take a look and pics. The next thing I remember is that he was trending on Instagram. Perhaps it signified your appearance as an ascended master, bringing freedom to humanity. And so be it.”

Anyway, this is what happened this night and it felt so real to me, even more real than living in this insane End Time of ongoing lockdowns due to fake coronavirus pandemic and peaking fear-mongering madness of masked zombies.

This night I woke up around 02:00 am and knew that I had a very important dream to remember but it was overlaid by another insignificant dream I had last. Then all of a sudden I remembered it. I dreamed that the stock markets would crash tomorrow and that all the savings of the people would be lost forever. This would trigger the long-awaited sudden crash of this fake Orion economic system.

The most remarkable circumstance in my dream was that the entire PAT was gathered to discuss the upcoming financial crash and what we should do about that. I told a PAT member that she should get up very early in the morning and sell all her stock shares as soon as possible before the crash would come. She responded that she was hit so hard by the LBP that she could not wake up early and might miss the selling of her equity shares in due time, but as ascension would come anyway, it did not matter. I told her that these last years the growth of the stock markets was unreal and people were becoming richer while sleepwalking as these chart numbers were fake and did not reflect the collapse of the real economy.

The PAT was gathered in a big dormitory, which I assume was a symbol for the astral plane where we meet in the dream state. At one point, Amora noticed a spider coming down from the ceiling in the centre of the dormitory on his spider web. She rushed to take it in her hands which surprised me a lot as she doesn’t like spiders and always asks me to remove them. When she came nearer to the spider it metamorphosed all of a sudden into a beautiful butterfly, very similar to this one: 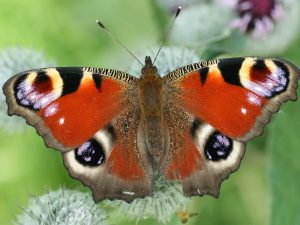 I immediately interpreted this metamorphosis as a metaphor for the proverbial spider on the web, the bankster, who will be now transformed during the crash and the planetary shift into a beautiful butterfly, which is the ancient Greek symbol of the soul: The agnostic will become a spiritual being knowing that he has a soul. We associate butterflies with the new 5D earth – with Heaven on Earth.

I remembered this dream in the awake state and after that continued dreaming of the crash of the financial and stock markets the whole night so that I made sure that I would not forget it in the morning and report it. I knew that this announcement of my HS was of paramount importance and I should inform the people. I decided already in the night to publish this urgent astral news today.

It comes in the aftermath of the massive, very intense and prolonged cleansing episode since the opening of the Equinox portal which started actually 2 days before that and also included some very fierce final energetic battles and separations of dark energies of the once ruling but now disempowered human cabal who is behind the second lockdown. To that, we shall see much more in the coming days.

Therefore, it is wise to expect very soon the “Big One” financial earthquake that will ultimately lead to the closure of all banks, their default and the loss of all savings of the people, in case there are still any. Therefore, I recommend you to get as much cash as possible and be prepared for the coming stormy days. This time there is no escape – Gaia is ascending and humanity too, and the dark cabal and the old 3D matrix must inevitably go under. Without their oppressive financial system, the dark cabal and their banksters are zero – Zero Hedge – they will be the laughing stock of the awakening humanity, amidst the people’s tears about their own stupidity to follow such debased evil human beings for such a long time.

Today, our beloved PAT member Wendy wrote this to me with respect to the impending financial crash and higher dimensional reset of world finances and resources:

“When I read your Stock Market article in today’s publication, I suddenly remember that yesterday I just read about Stock Exchange in I AM book Vol 12 Discourse IX by Master Youth Bob in Nov.9, 1938. Normally I AM books do not specifically mention particular subjects like this. But it appeared in front of me yesterday. Is it interesting? I quote them as following:
” A tremendous Power of the Light is being brought forth in New York City that will cause the dissolving of the Stock Exchange. I feel that that must be done to release mankind from the tragedy which has come through it. The black magician, you will remember, who established that has been removed from the Earth. Therefore, the feeder of that is gone; only the momentum remains.
Question: ” Was that not directly at the Command of the Archangel Michael?”

Answer: Oh yes. Don’t think that We are deceivers, but We use many means to draw forth the black magicians; and the last five that were seized were so amazed. They were led to believe that they were having a clear pathway. Then all of a sudden they found it obstructed, and they could not go either forward or backward. So it is just the Action of Wisdom; and as you find the Power of Wisdom acting more and more in your Life, will you find a Happiness that is complete.”

These timeless I AM books read as everything happens NOW. Certainly, there is NO time in the Higher Realms.