Our Activation of a Powerful Multidimensional Druid Portal in the village 0f Bajardo, Liguria 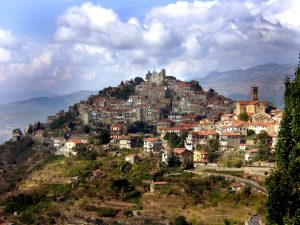 On September 13, 2020 Sophia, Amora and I decided to visit an ancient Celtic temple on the top of a hill where the current village of Bajardo is situated in the Ligurian Alps north of Sanremo. Something else you may not know about Bajardo: it is the highest village in Liguria (1000 m high), called Ligurian “little Tibet”. Sophia has been telling us about this magical place for a long time and finally, we were urged by our HS to visit it. We knew we are going to do important light work there.

Early in the morning, when we were still in our apartment, we had a massive dark intervention from the astral plane that tried to impede and derail our light mission on that day. This attack was mainly directed against me as I am the chief opener of new multidimensional portals being the human nexus to the Source and responsible for establishing multi-dimensional connections between Gaia with other civilizations in this universe. This is what the Elohim told us already seven years ago (read the energy reports from that time). However, I have been attacked and beamed by dark evil sources now so much since I am in Italy and even much more so during my stay in Austria this winter, that I immediately recognized this dark attack and for what it stood and neutralized it.

As soon as we drove to Bajardo, the intensity of the waves peaked up all of a sudden. A huge vortex was built above my head and I was struck by stabbing headaches changing quickly from left to right. When we arrived in the village and parked the car in front of the parish church, we were encompassed in a massive vortex and could barely walk. We entered the old church of Bajardo which is a big and beautiful building, such as you can only find in Italy in such remote small places and of which there is nothing similar even in the biggest cities of North America.

In the church, the high-pitched tone of my left brain portal became deafening and everything was shaking and wavering under the Source downloads that flooded our bodies and fields. Amora was also nauseated and very wobbly while I was walking through the aisle of the church like a drunken sailor. We knew that we were doing something huge in this remote village in the Ligurian maritime Alps. As we felt very weak, we decided to have lunch in the near-by tavern in front of the church before climbing up the hill to the Celtic temple.

We had the most delicious local meal ever and were talking about various esoteric issues both in Italian and English. There was an Italian couple at the table next to ours and the man was looking at me. I sensed how uncomfortable he felt in the presence of our powerful high-frequency energies but there was nothing we could do about that. When we left the restaurant Amora heard him saying to his wife: “Finalmente, sono salvato!” (Finally, I am saved!). This gives you an idea as to how powerful our fields are, especially on that day, and why most humans who are very low vibrating and completely encased in their personality fear structure are so uncomfortable in our presence that we will not be able to reach them directly when we appear as ascended masters but only through other human intermediaries.

We then climbed the hill and reached the narrow plateau, where the old Celtic Temple was built in prehistoric times, displaying a gorgeous view over the neighbouring mountains. 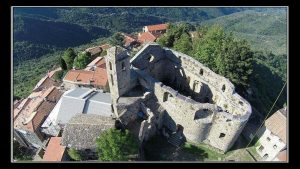 The existence of this Celtic Temple was not really known to the locals until there was a big earthquake in 1887 that only destroyed the Christain church built on top of the old Celtic temple and the latter appeared in its full majesty as an open site honouring Sun-God as was the case in the open Sun temples during the reign of Akhenaten in ancient Egypt. 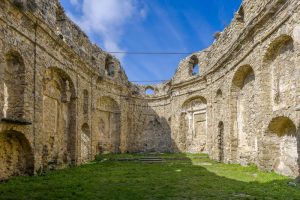 It was a magical place in every sense of the word and we all three felt very much attracted to it and its ancient Druid history as if we have lived during that time, which is most probably the case. The Celtic temple reminded me of some magical ancient places in Bulgaria, in the Rhodopes mountains, where Orphism emerged in prehistoric times.

Amora saw with her third eye a large oval rainbow spinning wheel in the ground around the altar.  She was shown that this rainbow wheel is a multidimensional portal full of crystalline light and frequencies leading to numerous unknown dimensions and realities.

We were walking around and talking about the Druids – who they were and what was their place in the bigger cosmic history of Gaia and humanity. There is very little known about them and most of it is forged history by the Romans who slandered them for making human sacrifices in order to rectify their total genocide of all Druids while they conquered most of Central and Northern Europe where the huge Celtic tribes lived since times immemorial.  The Druids were the natural leaders of the Celtic people and they resisted vehemently the expansion of the Roman-Reptilian Empire as this is ingeniously captured in the famous comic book series of Asterix and Obelix.

We even managed to establish first telepathic contact with the Druids on the site of their temple and learned that they were cosmic travelers and that they came on the earth a long time ago to help the human population in these difficult times after the destruction of Lemuria and the beginning of the Reptilian/Anunnaki enslavement of humanity by the infamous rogue Atlantean clique which we finally eliminated end of March this year. However, we were very tired to receive more information as the energies were just pouring through our bodies and fields.

On the way back home, we missed the entry into the highway and had to drive the coastal road of ancient via Aurelia in order to disseminate these codes in the area of Sanremo up to Diano Marina where the study and healing centres of light stretch.

The next two days were very heavy and exhausting for us as we were again attacked and beamed with psychotronic weapons by the same dark entities from the space that wanted to prevent us from activating and opening this important multidimensional portal of the Druids. Both Amora and I had the typical burning headaches and agitation in our fields that can only be caused by psychotronic weapons as we experienced them every day this spring when we arrived in Italy.

Obviously, there were still not-eliminated dark forces in this universe that wanted us to fail and when we opened successfully the multidimensional Druids’ portal took revenge on us. I am still having a headache while writing this report and that continued the whole previous day and night with pronounced rigidity of all the muscles causing also joint pain. This is a massive ongoing cleansing operation associated with the elimination of these dark entities on multiple levels.

This morning the Druids appeared again to us, so joyful and grateful for their release from their entrapment on the earth plane. They are still present as we write this experience and are telling us that the Romans had exterminated all of them wherever they could find them and since then their souls have been trapped in the astral plane around the earth. They confirm what we already know – that the earth is sealed with a special energetic membrane that holds incarnated souls trapped on the earth. This membrane was built eons of time ago by the archons, the Anunnaki, and the Reptilians to trap human souls on this planet and use them as energetic fodder.

This explains to you why the ascension of Gaia and humanity is such a difficult birthing and why there were so many unpredictable energetic problems to resolve that made the ascension process so complicated and protracted. The druids told us that for them this entrapment felt as if it has been a whole eternity as they remembered everything.

They participate in collective awareness and were talking to Amora in singing voices building a beautiful symphony. They presented themselves to us as very intellectual, almost like Aristoteles and Plato, but representing a collective unity field.  In a way, they are very similar to the Dragons who we liberated in another glorious battle more than 2 years ago in May 2018 and helped them reclaim the earth as their home planet after they were persecuted, killed, and evicted from the earth by the same dark ones.

The Return to Eden!

The Druids told us that they are cosmic travelers and had never experienced true separation from the Source. That is why they decided to undergo an individual human incarnation and come to the earth to help the Celtic people organize according to spiritual principles. Even as incarnated human beings they were very medial and had open contact with their souls and civilisation. This qualified them to become natural leaders of the Celtic tribes that were the autochthonous population of the Old Continent before the current historical peoples appeared in Europe, beginning with the ancient Greeks and later on with the Romans. The whole current historic knowledge about these epochs is very mirky and inconclusive and actually as false as all science we know today.

The Druids were infinitely grateful to us for liberating them from this “dungeon planet” and for being able to return home. They were actually contacting us from their home which they couldn’t explain where it actually was as it is not connected to any cosmological objects. The Druids are, as I said before, multidimensional cosmic travelers and thus live in a disembodied state beyond space and time. They did not have any bodily 3D incarnation before appearing on the earth as Druids.

They were highly revered by the Celtic peoples for their knowledge, compassion, and wise leadership of enlightened individuals. They embodied very much the prototype of leadership the PAT will represent very soon after our ascension. Therefore, it was so important to close this infamous chapter of bloodthirsty Roman history as Italy will not be able to ascend with this tainted past, which has now been cleared and healed.