The days of the Lion’s Gate Portal in August 2013 were undoubtedly the most dramatic in our whole life. There is nothing comparable to that although we have experienced quite a few critical moments since we are in Italy that exceed by far the most daring Hollywood science fiction movie plots: Notably, the attacks of the dark roque galactic Atlantean group on us with psychotronic weapons end of March 2020. These attacks went for more than 2 weeks since I left Austria, where their headquarters were and where I was attacked for roughly 5 months day and night by this evil clique who bears the responsibility for the destruction of Atlantis on Mars. Their desperate attacks culminated in a veritable war that involved conventional military means.

On March 26th, they sent a big military jet to mark the condominium we lived in with a special chemtrail by flying very low, unusually low for such a jet, that then made a perfect circle above our house so that the dark Atlantean ETs could locate us and start bombarding us with their powerful psychotronic weapons from the space as these photos show. However, by the time we were able to make these photos, the spaceship of the GF that protected us moved the chemtrail ring further to the north after we were telepathically averted by our friends from the Galactic Federation and had noticed it above our condominium. We knew immediately that we were in danger and began with our counter-attacks and protection. This led to the expulsion of these evil ETs from all earth timelines and the separation of all Atlantean timelines on March 27th from the new earth that was created in the next few days and was very fragile and vulnerable until the 10th of April, 2020. 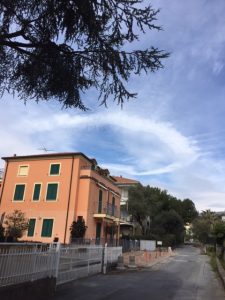 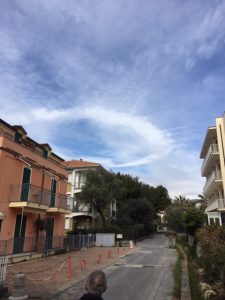 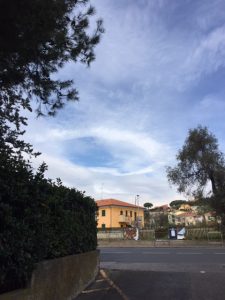 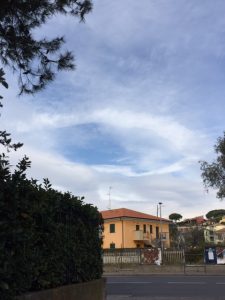 Please observe the V-shape form of the cloud above the ring that indicates an artificial vortex caused by the psychotronic weapon used by the evil rogue Atlantean ETs from space to attack us.

I am publishing these photos now with a great delay safely because we have eliminated in the meantime all dark evil ETs from the earth. This ongoing battle during the last two decades finally culminated in the eradication of the big ugly, evilest Reptilians from the Draco constellation on June 10th that were personally responsible for the current lockdown. This ultimate fierce battle was another highlight in our life but even these most remarkable experiences cannot compare with what happened in August 2013 during the Lion’s Gate Portal as the many messages we received from the HR testify.

Here I am publishing first the Elohim message which powerfully confirms that Amora is the first human being in the history of the earth and, as we understand it, in the entire universe to have ever transfigured her physical carbon-based body into crystalline light body from such a low vibrating 3D reality to the higher dimensions of the Inner Earth of Agartha that extends from the 5th to the 8th or even to the 9th dimension (the Hyperboreans).

Then I will publish in a separate article the message of Adama, which is one of the last messages he gave to a human being (Amora) before the Lemurians (Telosians) ascended from Telos to the 6th dimension and left the Inner Earth under Mt. Shasta. All alleged messages from Adama that have been published on the Internet since 2015 are thus fraudulent. Only recently we established again contact to the Lemurians and the Agarthans and they confirmed empathically their ascension to the 6th dimension, shortly after Amora ascended and that they have stopped contacting representatives of the surface humanity until recently when they first showed up to Amora near Mt Baker in Washington, USA in the summer of last year.

The Elohim On Carla’s Ascension:

“This day, August 13, 2013, marks the day in the history of humankind, where one human has traveled to the shores of the Fifth Dimensional expression wholly in body, mind and spirit.”

This is going to be a very difficult letter to write.

The experiences I had today (August 13th) are in no way provable in any tangible way, in any clearly scientific way, and it may even be that what I experienced is only pure delusion, created purely out of the stress of wanting something to happen.

What I do know, that returns my faith to me, is that over many years and especially the last several years, perhaps since 2006, I have experienced events on a fairly regular basis that can be described as miracles, as openings, as proof of God. It is because of these so very impressive events of the past that have made me a believer in miracles, Angels, and of course, in God.  So while I have no proof of anything that I may have experienced today, or thought that I experienced today, I nevertheless wish to say that it is my very humble opinion that what I am about to recount is true.

I have taken several hours to consider the experiences of today and allow an understanding and integration of what it all means.

For the time being, I would ask that you please not publish anything, although I do not mind if you share this experience with those whom you regularly exchange comments and opinions, such as April, Jerry, Jahn, Daniel for instance. I really appreciate this, Georgi, and it is not as though I will never want it announced, it is simply that I am still in disbelief that such an event happened today in the first place. I would also very much like to have some kind of confirmation from someone and I may even seek this out myself, over the course of the next couple of days.

To begin the story, you have several short e-mails from me, describing what I was encountering as the high-frequency waves were coming in, almost every hour on the hour.  At first, I was very dizzy, very nauseated and then I started to experience a very uncomfortable visual, where I normally see a room spinning, this time the rooms/sky were vibrating. After a time, the “awful” feeling was replaced by a high state of bliss and heightened awareness. I once again felt disconnected from everything in my world, as I had on the 11th of August following the magnetic pole reversal on the 7th level of 4D.

Then, rather suddenly, I had to lie down. The room filled with Beings, Angelic Beings, Archangel Michael and some other energies/Beings that I did not recognize.  I felt myself lifting up and away and realized that I was in an extremely beautiful place, one of pure beauty, of pure essence, of pure love and kindness, of all the things that I and others have ever wanted in a home.  In front of me was the most beautiful crystal palace, in a pale sky blue colour. It shimmered in the sunshine and was in clear contrast to the deep blue sky. There was one particular dome on the left side with a spire that rose into the clear sky, almost releasing a beautiful tone as it reached up. The trees were so lush and beautiful with lime green leaves.

The most striking thing was, however, how I felt in my body. I was aware of my body, being very light, painfree, agile and yet strong. I had taken my “body” with me. I was away, “asleep”, for about an hour. I returned to the bed in a very peaceful way as though upon a gentle breeze. My body was buzzing and numb. I could not walk as my legs had no strength in them.

I laid there for some time and fell asleep again. I cannot remember exactly what happened after this. When I woke up finally, I was greeted by many Beings and they had messages for me.

The first group of Beings was The Elohim.  Here is their message:

This day marks the day in the history of humankind, where one human has travelled to the shores of the Fifth Dimensional expression wholly in body, mind and spirit.

This is a breakthrough, indeed, for before this point in time it was uncertain whether the physical vessel could actually make this journey, safely, intact.

Your surprise at this event has you thinking you are losing your mind, but we reassure you that this symptom is actually the clear signal of truth, because in experiences of this nature, the human mind holds fractured memory, fractured time and even interprets events as fractured space.

It is a truth however, that no one has witnessed your departure and return, where verification of this fact could be made. This trip was arranged by the Higher Realms, in order to establish, finally, the current level of success this mission would have if undertaken at this point within the ascension process.

We, the Elohim, are honoured and delighted to confirm that this has been a successful “test run” and the human body, at an equal readiness to yours, and those of higher degrees of readiness, of which there are a few (e.g. Georgi), are safely prepared to make this evolutionary leap. This is the moment of the true “Evolutionary Leap of Mankind“.

Eons and eons of time, of genetic work, of death, of re-birth, each experience building upon the other, in the creation of standing waves of memory, of learning, of building, of expanding, one thought form at a time, to finally arrive at this moment where all is complete! All has gone full circle, a circle of reformation and perfection in every moment!

This is why we greeted you, upon your return, your awakening from this journey, with

There were other Beings present with The Elohim, including Adama of the Lemurian City of Telos, Archangel Michael, The Council of Twelve, and many others. I am going to continue this e-mail tomorrow morning, Georgi, as I am overwhelmed by these events today. I have another message from Adama of Telos and a message from Archangel Michael.

I will continue with my letter tomorrow morning.

With all my love,
Carla

Read also: A Chronicle of Carla’s Ascension to the 5D Earth – the First Full Ascension of a Human Being in Physical Vessel – in Real-Time