The last several days in a row we experience the most gorgeous sunset we have ever seen in our life. Daniela made photos on three consecutive days (see more photos at the end of the article) of the beautiful golden rays that were rising above the hills and immersed in the infinity of the blue sky. Please observe that there were no clouds whatsoever to cause this diffraction. The rays came directly from the red giant sun and illustrated the multidimensional reality in the space-time continuum above us: 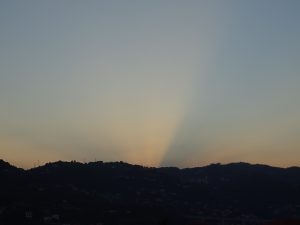 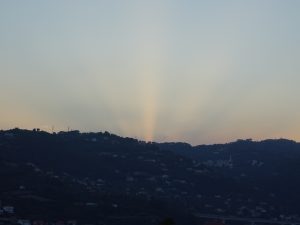 On July 15th Daniela was able to take pics of unusual golden flames of light that appeared on top of the hill and which she could capture with the zoom. 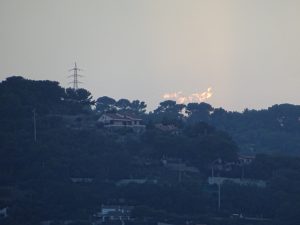 The next day Carla had a conversation with Julia after she sent her the photos and they made a meditation on this unusual phenomenon. Here is Carla’s report on what they learned about this “sacred fire”:

“I showed Julia the photos that Daniela took the other evening with the bright clusters of flames on the horizon from the apartment in Italy, and we were immediately told that we were to receive these flames into our fields at that moment in order to anchor them into the Mediterranean Basin. We were told this light represented the Sacred Fire and its purpose is to stabilize and heal the earth as this was needed following the placement of the new Fourth Dimensional matrix on June 21st.  The Sacred Fire stabilizes the earth now and will support it in the face of the upcoming energetic portals over the next few weeks of July and August of this year (triple eclipse portal, July 13th, July 27th/28th and August 11th parallel to the Lion’s gate with a peak on August 8th).

Then I received a short message from Astraea et Amora:

“This is a time of great change.. a Fourth dimensional expansion took place with your solstice alignment [June 21-22] …and the Sacred Fire is here now to support the planet through its ongoing expansion into the light.

The Sacred Fire brings the Living Light into All New Creation before you with as much life as can possibly be concentrated into one moment!  It is the light force of creation from where the Source begins as ‘Infinity’….”

It was made clear to us that with the arrival of the fourth dimensional frequencies, the planet itself requires support, and this is the reason for the Sacred Fire. We were shown many areas around the globe that need this Sacred Fire anchored and this included what’s called the Ring of Fire in the Pacific Ocean. The Ring of Fire is a series of almost continuous volcanos and trenches that experience frequent plate movement.  Before we sent the rays all around the Pacific Region we were asked to first send this light to the Oregon coast line, then down to San Fransisco Bay Area.  Afterward we visualized placing the light all the way up the coast of the USA from there, up along the coast of Canada, Alaska, and down the east coast of Russia, China, Japan and in to Indonesia.  After visualizing all of these areas I was shown how important it is to place this sacred fire also at the west coast of South America, notably Chile.  We spent about 30 minutes visualizing the placement of this light for instant healing.

In response to my inner question about the unusual nature of time that I have personally felt to have accompanied this new fourth dimensional reality – two weeks expanding into what feels like two months – we were shown that a good analogy for time now is the Accordion, the musical instrument – where time can expand on the in-breath and contract on the out-breath.  We were also shown that we “seed” our desired outcomes as creations of what we would like to experience, on the in-breath.  On the out-breath we can visualize our creations being nurtured and fed with love, so that on the next in-breath we can visualize them being already created, or at least in the process of being created.

As we practiced this new suggestion of how to create, I personally felt it to be a very powerful experience to focus in such a way with my breath along with my thoughts of what I would like to create. This really supports our ability to expand fully into the present moment, a precious gift.

Unfortunately the photos do not give the true colours of the sunsets we observe these days as their spectrum is actually beyond that of the visible light and can only be seen with our third eye. 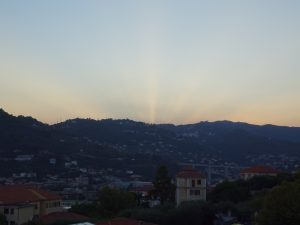 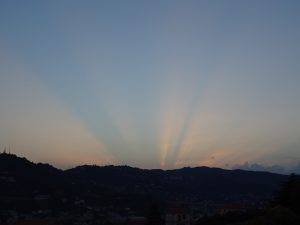 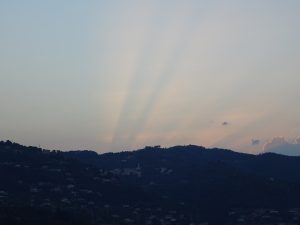 And yesterday evening with clouds: 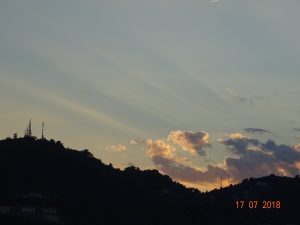 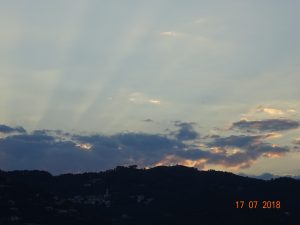