All the stock markets are in full crash mode today punctually to the opening of the Davos conference of the chief dark cabal and their banksters as already predicted by myself. These criminals who owe this world (the 62 richest people possess more than 50% of the world population of 3.5 billion poor humans as Forbes has just published) are now losing their fortunes very quickly.

The big news today is that Fannie Mae is bankrupt. Again! This mortgage-finance company, which operates under U.S. conservatorship, declined 10 percent to 99 cents at 9:33 a.m. in New York, compared with a peak closing price last year of $3.31. We have entered the “one-dollar-stock markets” as I told you with respect to the German tech index before it was abolished.

This all happens one day after I published my report on the massive alchemical reaction which Carla and I are performing since January 14 to crash and transform the real estate market. This alchemical reaction is still ongoing and all the PAT should fully participate in it. 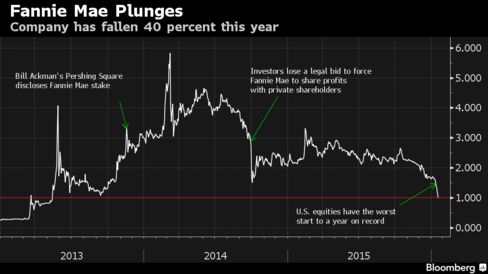 In order to understand the scope of the today’s crash you must know the recent history of this entity Fannie Mae since the 2008 crisis. This company is the greatest victim of the subprime mortgage fraud which began in 2003-2004. Following their mission to meet federal Housing and Urban Development (HUD) housing goals, Fannie Mae, and the smaller Freddie Mac, together with the Federal Home Loan Banks (FHLBanks) “had striven to improve home ownership of low and middle-income families, underserved areas, and generally through special affordable methods such as “the ability to obtain a 30-year fixed-rate mortgage with a low down payment… and the continuous availability of mortgage credit under a wide range of economic conditions.”

As mortgage originators began to distribute more and more of their loans through private label MBS’s (mortgage backed securities), the two mortgage behemoths lost the ability to monitor and control the mortgage originators. The shift toward riskier mortgages and private label MBS distribution occurred as financial institutions sought to maintain earnings levels that had been elevated during 2001–2003 by an unprecedented refinancing boom due to historically low-interest rates which caused the real estate bubble in the USA that still persists as Brad told us yesterday in his article.

The growth of private-label securitization and lack of regulation in this part of the market resulted in the oversupply of underpriced housing finance that led, in 2006, to an increasing number of borrowers, often with poor credit, who were unable to pay their mortgages – particularly with adjustable rate mortgages (ARM) – and caused a precipitous increase in home foreclosures. As a result, home prices declined as increasing foreclosures added to the already large inventory of homes and stricter lending standards made it more and more difficult for borrowers to get mortgages.

On July 11, 2008, the New York Times reported that U.S. government officials were considering a plan for the U.S. government to take over Fannie Mae and Freddie Mac should their financial situations worsen due to the U.S. housing crisis. Fannie Mae and the smaller Freddie Mac owned or guaranteed a massive proportion of all home loans in the United States and so were especially hard hit by the slump. Fannie and Freddie underpinned the whole U.S. mortgage market. As recently as 2008, Fannie Mae and the Federal Home Loan Mortgage Corporation (Freddie Mac) had owned or guaranteed about half of the U.S.’s $12 trillion mortgage market.

If they were to collapse, mortgages would be harder to obtain and much more expensive. Fannie and Freddie bonds were owned by everyone from the Chinese Government, to money market funds, to the retirement funds of hundreds of millions of people. If they went bankrupt there would be mass upheaval on a global scale. Fannie stock plunged after this news was published just as it did today in the onset of the crash of the real estate markets which we triggered single-handed with our alchemical reaction and then with the support of Brad. With the publication of my report yesterday the whole PAT is now involved in the creation of this crash and I urge all of you to use the seven sacred flames and the new light from the source in the infrared and ultraviolet spectrum to accelerate this crash. You have it in your hands.

And this is what happened in 2008. All the banksters and politicians worried that Fannie lacked capital and might go bankrupt. Others worried about a government seizure. U.S. Treasury Secretary and former chief bankster Henry M. Paulson as well as the White House went on the air to defend the financial soundness of Fannie Mae, in a last-ditch effort to prevent a total financial panic. The Administration PR effort was not enough, by itself, to save the two companies. Their government directive to purchase bad loans from private banks, in order to prevent these banks from failing, as well as the 20 top banks falsely classifying loans as AAA, were about to cause a total financial meltdown in 2008. Paulson’s plan was to go in swiftly and seize the two mortgage companies, rather than provide loans as he did for AIG and the major banks; he told president Bush that “the first sound they hear will be their heads hitting the floor“, in a reference to the French revolution. This is how the Wall Street banksters blackmailed the politicians to begin with their infinite QE programs of gargantuan debt.

And here is where we stand now. Both Fannie Mae and Freddie Mac have been on my watch list as bankruptcy candidates of global proportion since 2005. Unfortunately I had to wait for more than 11 years till this happens today, although they are de facto in default since 2008 and the US state has taken over all their bad loans that will now break the neck of the real estate market and the US-Orion economy.

For those of you  who do not have this deep and long historic perspective – you should know that everything that happens now and will cause the collapse of the Orion financial and economic matrix has been in preparation for a very long time. All the bubbles that have burst now and will crash the system have started with full force since the Fall of the Iron curtain as I explained to you and are not random events, “black swans”, as some ignorant and agnostic experts make you believe, while the MSM are in a total denial mode, which is nothing else by the proverbial paralysis of a scared to death rabbit in front of the eyes of a dancing cobra.

The cobra is, in the eyes of the dark cabal, the forces of light that are responsible for the ascension and the collapse of the old matrix and we, the PAT, are the pipers, while the cobra is dancing in trance and full harmony to our music before it swallows the rabbit. Sic transit gloria mundi!