I wanted to provide an update to follow up on our last discussion to hopefully inspire some people.  The instant manifestation is intense for sure, but I don’t think many people get a chance to see it.  Frank is very perceptive in understanding the jihadi discussion is the root of almost everything.  I can’t even discuss owning a house without getting there.  Charlotte nailed it with her comments and I will expand on all of it with my next jihadi installment.  As I said when I wrote it, if it doesn’t make you feel good then there might be something off.

Sheryl mentioned a perfect subject that is something I will discuss in my next article and that is painting with a broad brush stroke.  I can’t take every single person into account in healing systemic issues.  A multi-dimensional being gets highly in tune with what systems are at work because they create the products of what we see.  I was interviewed by a friend who was doing her work on creating new food systems in conjunction with the city and she said I was the only person who brought up systems out of all 50 she interviewed to discuss how to repair things.  You may want to know that the systems at work in America can’t afford any major light to be seen at this point because then you see the boiling pot you are actually being frogged in.  After my soul sharing experience, it’s all I care about and has been hard to even learn to be an individual again.  When I speak to an individual, I hone in and listen as intently as possible and then assist in individual energetic healings with these intense systemic understandings.  China, Japan, and Europe all either flooded markets with money or discussed increasing accommodation of money in the last 24 hours so if you are talking to anyone about manifesting money right now, you are absolutely mentally ill.  That takes care of 3/4 of the US at least.

I wanted to share yet again the follow through from the wonderful energy we release as we confront every item demanded.

You covered the real estate experience amazingly and we already saw the Fannie Mae follow through.  Look at this.  I mentioned Blackstone and the biggest real estate demon made an ass of himself immediately:

Here’s the Koch brothers stuff that came up immediately:

I mention Wichita and serial killers and my friend sent me this about death sentences in Wichita:

I haven’t dug into architecture the last two days but I’m sure something happened.  I did target the poisonous paint industry and I almost fell over when I walked downstairs and hung out with my daughter playing some video games.  She was playing a game she had gotten for Christmas from Grandma called Splatoon where you run around and spread paint on everything to win.  Makes Sherwin Williams logo look tame.  My daughter put out more paint in that game in five minutes than I’ve used touching up houses in twenty years.

Here are two perfect instant examples of the female jihad taking place that the fraud is allowing as participation.  If people didn’t get the hint with the attention MMA fighter Ronda Rousey is now getting, then you may want to notice they are speaking of implementing a draft for females now.  Nothing like equal rights.  All of the jihadi moms at my kids school have more muscles than me now anyway.

But this one has to be the all time classic to back me up in doing what I do.  Here is the NFL team of Buffalo allowing the first full-time female coach.  She’s basking in complete glory right now not understanding she’s being used to make sure mothers keep offering up their kids to football right as they are proving almost everyone is suffering from severe brain damage.  Right as the movie concussion comes out, too.

There’s probably a ton more in two days, that’s what found its way to me with little work.

I did want to point out Bill Holter and Jim Sinclair just announced a fee service they are starting to add to Jim Sinclair’s wonderful site he has done for free and at great expense for years.  They are good, but it doesn’t even remotely touch your site.  The Universal Law Press is an amazing accomplishment.

One other update is on the Pale Rider market devastation and any noticeable change. It couldn’t get any darker in the world’s markets on Tuesday.  It is all out warfare.

There is a development in the dollar and gold that is very positive and could be amplified by its understanding.  The dollar and gold, which are the ones I need for full coherence both show the exact shift on Dec. 2nd when the Pale Rider was posted.  Absolutely incredible development.  That the Dollar didn’t break out over 100 in the chaos the last few weeks is definitely astounding.  Here’s a different chart from cycle guy which matches up with our technical master in the short-term. 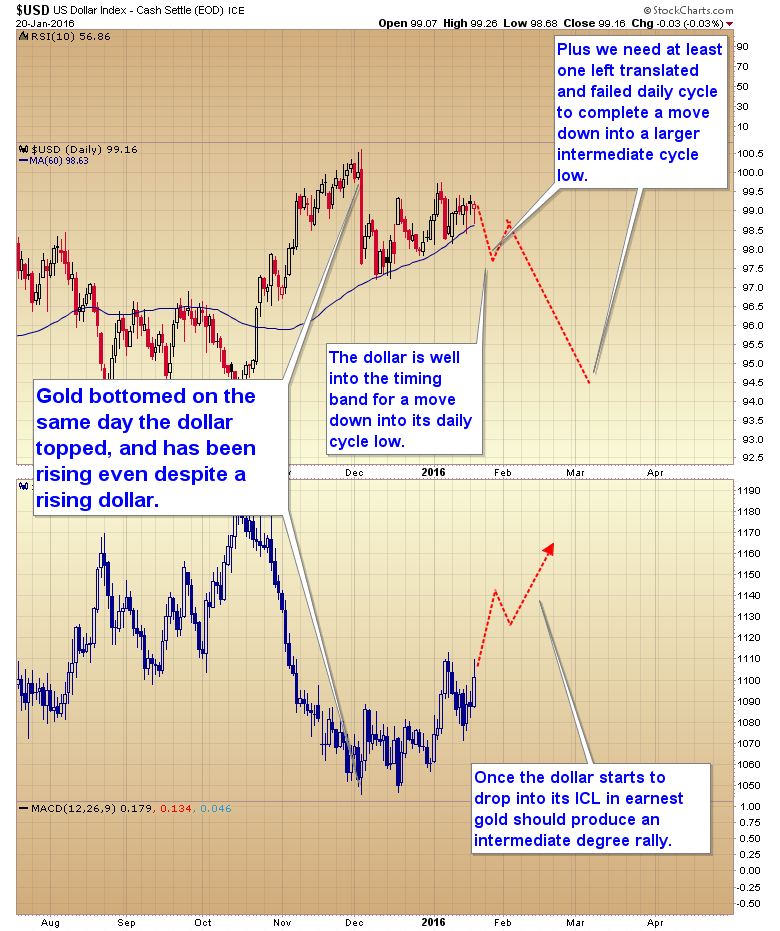 You will notice the dollar didn’t budge to the upside since 12/2 and that’s when the markets started getting annihilated.  The dollar has not added any additional safety as it almost always does and yesterday was pure panic that got stopped by a massive purchase of off shore Yuan in the middle of the night in China and kept the markets from going into absolute free fall below the 1800 S&P level we have discussed.  The small bounce here is probably the last bit of support before disaster, but I am still a bit cynical after all the delays.  Trying not to be, but it’s tough.

The next little bit will be fascinating in market world because it says the Dollar is about to have a quick surprise smashing.  How every other market reacts in relation will be fascinating because it may be opposite to everything everyone is used.  Just today, for the first time, Euro stooge Mario Draghi talked about more stimulus to trash the Euro again and prop markets and it basically failed, not in the equity world, but in the currency world.  The computers have everything so messed up that the Dollar popped huge on the news of more Euro failure as always, but the Dollar reversed hard and left a nasty bearish shooting star technical signal that today may be the last surge to Dollar safety for a long time, possibly ever.  Just as we posted two days ago.  We are so close to full alignment.

Unfortunately that means what we know that means, a slight respite for commodities and all the other world’s currencies that are getting crushed which delays some problems, but starts adding in the biggest true problem which is the Dollar is the main weapon.   But what we really don’t know is how the stock markets will react to that the Dollar hasn’t been going up anyway.  That means if we want this over, something needs to break.   If you’ve seen the Matrix, the ending can’t happen until the star, Neo, makes a truce with the machines to be able to take out Mr. Smith that is the dark energy that has hijacked everything.  That’s just what I need to see as correlated machines are keeping this whole thing from showing the light.

If everyone remembers the ending of that movie, both the man and woman flew to machine city together.  That’s the way I see it too.  May coherence reign.