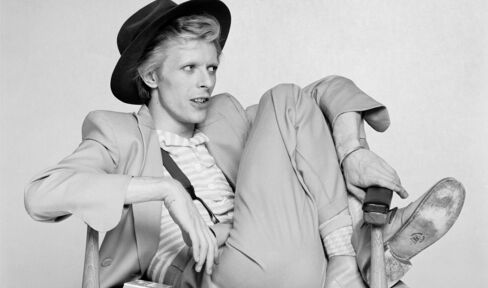 The man behind “The Man Who Sold the World” was the first recording artist to go to Wall Street to tap the future earnings of his music, paving the way for a thriving Ponzi scheme for esoteric securities backed by everything – from racehorse stud rights to commercial washing machines.

David Bowie, who died from cancer at age 69 on Sunday, sold $55 million of bonds in 1997 that were tied to future royalties from hits including “Ziggy Stardust,” “Space Oddity” and “Changes.” His example was followed by other dark, bought by the cabal singers such as James Brown and Rod Stewart and the heavy-metal band Iron Maiden. Securities backed by royalties allow artists to raise money without selling the rights to their work or waiting years for payments to trickle in. “Bowie’s bonds” paved the way for a massive securities scam bubble as they served as a template for all future so-called “esoteric” bonds which have as much common with spirituality as this financial scumbag and musical stooge of the dark cabal has with a light warrior of the PAT.

Underwriters for these esoteric securities in the U.S. were Guggenheim Partners from the Rockefeller-Khazarian Banksters mob (RKB-mob) who created this new esoteric Ponzi scheme. Beginning with David Bowie, these gangsters mortgaged all future creations of most petty American artists whose bad taste and despicable manners suffocated humanity in the last several decades with the aim of preventing ascension. In a most deliberate and despicable manner, as our PAT member and former pop star Tony Colton testifies in his memoirs:

The Rise of Modern Pop Music Amidst Dark Spells

The “Bowie bonds” were sold privately to Prudential Insurance Co. of America, another Orion bank belonging to the RKB-mob. The securities were initially rated A3 rating, the seventh-highest investment-grade rank, by the fraudulent Moody’s Investors Service, the same rating agency that also rated all the subprime mortgage loans in the USA as triple A and sold them to the rest of the world before they crashed in 2006-2007.

In the 2000s, Internet free access to music led to a massive drop in sales and Moody’s cut the rating of Bowie’s bonds in 2004 to Baa3, one level above junk. The decline in worldwide recorded-music revenues slowed significantly in 2014 due to the outbreak of the Greatest Depression of all time and because more and more people subscribe to streaming online services. The Bowie bonds were paid off after 10 years and the ratings withdrawn.

The market for “securitizing intellectual property”, which Bowie started, now includes film rights, pharmaceutical patents, restaurant franchises and even the “Peanuts” comic strip. Sales of esoteric securitizations made up 21 % of all U.S. asset-backed issuance last year before the bubble burst. Esoteric deal volume in the U.S. rose 16 percent to about $40 billion through November from a year earlier. However, they still remain a tiny part of the wider asset-backed securities market which, as I have written in the past, is about $ 900 trillion worldwide. This sum of virtual worthless financial products is 20 times bigger than the world GDP and will be the main factor that will trigger the financial collapse of the Orion system at the end.

Therefore it is a sign of perfect coordination of the HR that this dark entity David Bowie left this uppermost mother planet exactly when the financial crash, to which he as a bankster-musician had significantly contributed, is about to break loose.