“Spying on your friends – that’s really not on.” That’s how German Chancellor Angela Merkel reacted when she discovered her mobile phone had been bugged by American spies since 2002 in 2013 after Snowden’s revelations.

Subsequently massive claims of the German MSM that Merkel’s own secret service spied on German companies and citizens to their detriment and did not hesitate to also spy on their European neighbours and allies on behalf of the US have caused embarrassment and outrage in Berlin.

Only yesterday the German-French-GB owned giant Airbus manufacturer announced that it will file a criminal complaint over allegations that German intelligence helped the US carry out industrial espionage. German media reports suggest the country’s spy agency BND collected data on European firms at the behest of the US National Security Agency.

An Airbus statement quoted by AFP news agency said it was “alarmed” by the reports but did not want to speculate. The company said it had asked for more information from the German government:

“We are aware that large companies in the sector, like ours, are targets of espionage,” the company announced. “However, in this case we are alarmed because there is concrete suspicion.”

Leaks from a secret BND document suggest that its monitoring station at Bad Aibling checked whether European companies were breaking trade embargos after a request from the NSA. 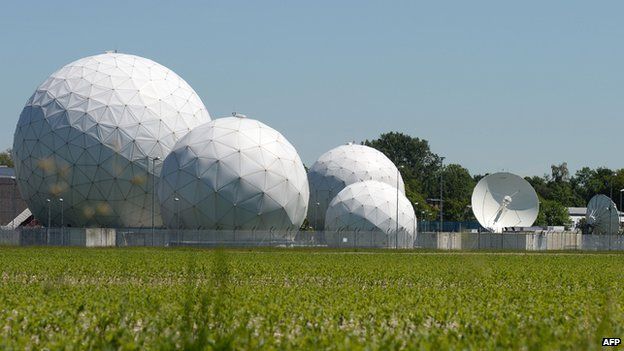 For years Germany’s BND intelligence agency has worked with the US National Security Agency (NSA). The NSA gives German agents a list of “selectors” – mobile phone numbers and IP addresses – which it wants the BND to monitor and the Germans follow. The pretext for this breach with the German constitution and law is to allegedly combat global terrorism, which the Empire of Evil created in the first place as to lead a perennial war against humanity and establish the NWO.

In 2008 the BND reportedly told the German chancellery that the list of selectors now included targets that had nothing to do with terrorism. Among them, it is claimed, were European businesses such as Airbus.

Now, according to newly leaked documents, it appears that Germany has also spied on the French presidential palace, the French foreign ministry and the EU Commission at the behest of the NSA. These revelations will undoubtedly damage the close relationship between the two countries and with the EU and will weaken the position of the two former European powers in supporting the second Minsk Ceasefire Agreement in the Ukraine crisis in order to avoid a new war.

In the firing line is now the interior minister Thomas de Maiziere, who in 2008 was the minister in charge of Merkel’s chancellery and directly responsible for the BND. He insists he knew nothing about malpractice within the secret service, but nobody believes him. The influential tabloid newspaper Bild printed a picture of Mr. de Maiziere on Wednesday – his nose elongated to Pinocchio proportions. 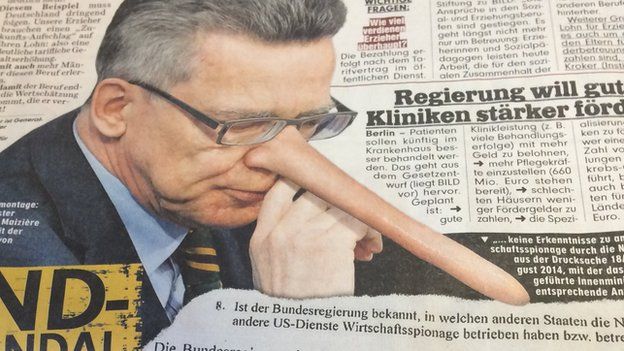 There is now growing pressure on the German government to disclose how much it knew about the espionage affair. Mr. de Maiziere says that – because the information is all classified – he is unable to comment publicly. But he has called for the leaked report to be presented to a special parliamentary committee “the sooner the better”.

That committee was set up to investigate revelations by US whistleblower Edward Snowden about NSA surveillance in Europe, including the monitoring of Merkel’s mobile phone, but it was unable to reach any conclusions and decided, under massive US pressure, against inviting Snowden to give testimony in person.

On Thursday morning one of the committee’s members expressed frustration. Christian Flisek, of the opposition Social Democratic Party (SPD), said the committee had been trying to get a list of NSA selectors through official channels for weeks but to no avail.

Surveillance is a sensitive subject in Germany in the light of the historical fact that all Eastgerman citizens were spied for years by the communist secret services and that is why the latest spying revelations have dominated the headlines for days.

Angela Merkel’s spokesman maintains that the chancellery was unaware of the extent of the espionage, but nobody seriously believes such rogue statements. Instead another widely read German newspaper “Die Tageszeitung” has devoted its front page to a “wanted” poster with the top political terrorists in the country, very much like the famous RAF terrorists “Wanted” poster in the 70’s and the 80’s.

The old blame game has now fully erupted in Germany. Who is the culprit and who is the scapegoat? Among the mug shots of politicians, civil servants and disenchanted MSM – Chancellor Angela Merkel herself is the main target. Too big is the discontent of the Germans with her reckless foreign policy towards Russia and Ukraine, for which the German companies and their employees have to pay the bill that she could not emerge unscathed out of this rapidly growing scandal as so many times in the past.

The bigger issue is though the acknowledgment of the German people that their country has never been a sovereign democratic state, but a petty vassal of the Empire of Evil. The unification of the two German states did not alter anything in this stark fact. As long as the Germans accepted blindly this status quo and did not question the submissive policy of Merkel and Co., the German elite and docile stooges of the AAA (Anglo-American Assholes) could continue with their reckless, unpatriotic, undemocratic policy against the interests of the people. Now the Germans have begun to slowly awaken due to the Ukraine war as a major catalyst in front of their doors and the situation has changed all of a sudden.

It seems that the hidden, but very powerful industrial lobby in the country is highly dissatisfied with the current pro-american policy of Merkel, as they clearly see that they are losing the economic war with the Eurasian Sino-Russian giant and will not be able to participate as equal partners in this unprecedented undertaking when the new economic zone from Vladivostok to Lisbon becomes a conspicuous reality very soon.

Now Germany must pass the test of courage and fully detach from the Empire of Evil. It must for the first time in its history enter a new stage of national maturity and adopt an independent sovereign policy, improving its relationship with Russia and stopping the Ukrainian war with joint forces. The Germans can no longer accept and even support the reckless war-and-divide policy of the Empire of Evil in the Old continent that only weakens Germany and Europe as a whole and endangers dramatically its peaceful development since WW2.

US spy leaks: How NSA gathers intelligence in Germany and abroad

Is Merkel a CIA Asset?