By Gary Vey for viewzone

The reality is more dreadful than all the “conspiracy” theories of the alternative media on the Empire of Evil, which all happen to be true. You only need to read the official statistics with open eyes. This revelation also explains why the US army has no soldiers to lead a major war and is only bluffing with its threats against Russia. This is the kind of revelation that needs to be internalized by the zombified American people. But I have little hope that this will happen from within. It will only happen through a massive and irreversible collapse of the whole Orion matrix and its main pillar – the Empire of Evil – very soon.

Editor’s Note: This story was published in the early part of 2010 and received little attention until just recently. It’s very satisfying as a writer to receive emails from readers who are finally realizing what kind of deception has been pulled on the American citizens. I also thank Rense.com for posting the link. For some reason, Rense.com rarely carries stories from viewzone.com, despite our common concerns and views. Anyway, thanks Rense! And thanks to the many readers who help spread the truth from websites like rense.com and viewzone.com — we do it for you because we love this country and despise what it has become of late. Happy July 4th everyone!

More Gulf War Veterans have died than Vietnam Veterans. This probably is news to you. But the truth has been hidden by a technicality. So here is the truth.

The casualties in the Vietnam War were pretty simple to understand. If a soldier was dead from his combat tour, he was a war casualty. There are 58,195 names recorded on the Vietnam War Memorial in Washington, DC. 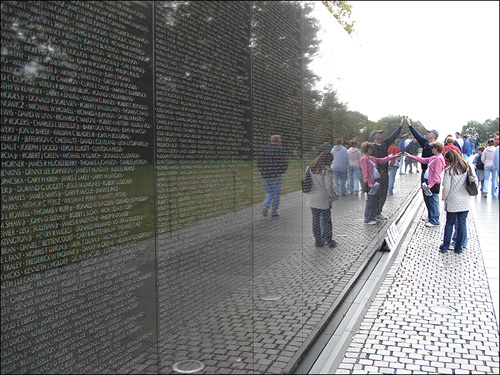 Some of these brave men died in the jungles of Vietnam while others died in Medivac units or hospitals in Japan and America. A dead soldier can surrender his life anywhere in service to his country. It really doesn’t matter where this happens. The location of a soldier’s death in no way colors his sacrifice.

But something odd has happened with the Iraq War. The government, under the Bush administration, did something dishonest that resulted in a lie that’s persisted since the war began — and continues to this very day. They decided to report the war deaths in Iraq only if the soldier died with his boots on the ground in a combat situation.

The combat in Vietnam was in rural areas, far removed from medical treatment centers. Injured soldiers were treated by a Medic. Most died at the scene of the battle before they could be evacuated. Many died on route or were declared dead at the medical treatment facilities. The situation in Iraq is vastly different.

Fighting in Iraq is mainly in urban areas. Soldiers who are injured are quickly evacuated with armored personnel carriers or helicopters. It’s a much more efficient system than what was possible in Vietnam, but for those that are seriously injured it means that death is more likely to happen while they are in transit or at the treatment facility.

Under the new reporting system, deaths that happen en route or post evacuation are not counted as combat deaths. This is why the number seems unusually low — a little over four thousand as of 2009.

The actual figures have been hidden from the American public just like the returning, flag draped coffins were censored from the press. But the figures are now available and we can only hope that the American people will be outraged when they learn how they have been misled.

According to The Department of Veterans Affairs, as of May 2007, reports in the Gulf War Veterans Information System reveal these startling numbers:

The statistics for non-lethal injuries are likewise staggering:

I know you probably will think this is another conspiracy theory — I did when I first heard about this — so please read the original report for yourself. [Source: http://www1.va.gov/rac-gwvi/docs/GWVIS_May2007.pdf Note: Sometimes this link is not active so we have posted the pdf file on viewzone 393 kb.] 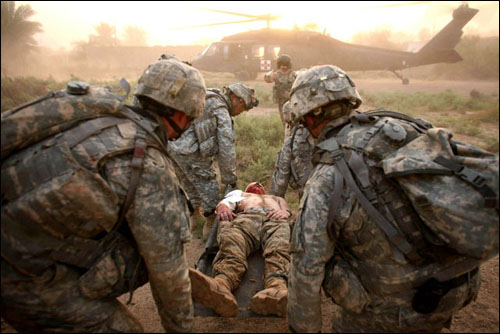 More than 1,820 tons of radioactive nuclear waste (i.e. depleted uranium) were exploded in Iraq alone in the form of armor-piercing rounds and bunker busters. This represents the worlds worst man-made ecological disaster ever. 64 kg of uranium were used in the Hiroshima bomb. The U.S. Iraq Nuclear Holocaust represents far more than fourteen thousand Hiroshima’s.

The nuclear waste the U.S. has exploded in the Middle East will continue killing for hundreds of years! That’s how long these particles of radioactive dust will continue to blow around, get lodged in someone’s lungs or be ingested. Scientists calculate that there is now enough radioactive material in Iraq to wipe out a third of the world’s current population.

While we never found any WMD’s (Weapons of Mass Destruction) in Iraq, we sure made up for it by importing our own! Birth defects among Iraqi newborns are up a whopping 600% from before the war. The defects are typical of the kind produced by exposure to radioactive poisons. And these injuries are happening to the civilian population of Iraq — the people we were supposedly “liberating.”

This writer happened to visit Iraq back in 2001, at the time Saddam Hussein was still in power. The world’s nations were imposing an embargo on all imports in an attempt to punish the nation for invading the neighboring nation of Kuwait. I remember the good people of Iraq who treated me with kindness and hospitality — even while knowing I was an American. Despite the embargo on such vital things as medicine and hospital supplies, the markets were thriving with local produce. Children freely played in the streets and there was laughter. To see what this war has done to Iraq is especially painful and speaks loudly of the immorality that has caused these innocent people to suffer. And now, to see that this same immorality extends to the American people in the form of deception and lies crosses the line.

I live in a small town in New England. We have known of many casualties from Iraq — too many. Yet the numbers being reported in the media make it seem that this is a rare occurrence. Just over 4,000? How can this be? In short — it’s NOT.

What will it take to awaken people and make them angry enough to hold our government responsible for these lies? A democracy is only good if its people are well-informed. How else can we make decisions about what’s best for us? If we are fed s*** and kept in the dark we truly are a nation of mushrooms.

Before I end this I want to say a big THANK YOU to all the vets who put their country and its people before themselves. We are proud of you and believe that you put your lives on the line for something a little better than what we are currently experiencing with our government. Thanks to you we’re still a democracy. So it’s up to us, the people you fought for, to make your effort worthwhile.

What do you think about this? Do you care?