Britain has a long-standing tradition of war crimes and major war criminals in the government of this  most deeply suffocated by dark Reptilians former Orion empire. “Once a crook, always a crook”. If this maxim has been fully comprehended by the masses, they would not have been lulled into their current clandestine enslavement  by the former PTB. Now this whole world is coming to an end and I sense by the hour how the old Orion matrix is crumbling from within and without, while I have already reached the 5th level of the 5D today and feel the new 5D world most intensively.

But history also teaches us why the Russians are now not only against the use of chemical weapons of mass destruction, given by the Brits and the Yankees to the Syrian death squads and notorious cannibals, but also against any violent military solution of the Syrian crisis. After all, the Russians were the first victims of chemical weapons of mass destructions used by the English army against innocent Russian peasants during WWI as this documentary below reveals.

“The thief cries, hold the thief” – this Bulgarian saying depicts very precisely the current position of moral obscenity of the USA and GB, whereas the latter country has already said farewell to its ridiculous imperial ambitions, knowing at the subconscious level that its destiny ist already sealed and that the petty remnants of this dark former Orion empire will disappear from this earth in the course of this month. The same destiny is awaiting its new version in the once “New World” which is also doomed to complete destruction as Asama Mahatari informs us today (this message will be published tomorrow).

The use of chemical weapons in Syria has outraged the world. But it is easy to forget that Britain has used them – and that Winston Churchill was a powerful advocate for them 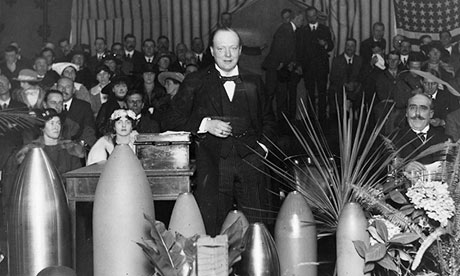 Secrecy was paramount. Britain’s imperial general staff knew there would be outrage if it became known that the government was intending to use its secret stockpile of chemical weapons. But Winston Churchill, then secretary of state for war, brushed aside their concerns. As a long-term advocate of chemical warfare, he was determined to use them against the Russian Bolsheviks. In the summer of 1919, 94 years before the devastating strike in Syria, Churchill planned and executed a sustainedchemical attack on northern Russia.

The British were no strangers to the use of chemical weapons. During the third battle of Gaza in 1917, General Edmund Allenby had fired 10,000 cans of asphyxiating gas at enemy positions, to limited effect. But in the final months of the first world war, scientists at the governmental laboratories at Porton in Wiltshire developed a far more devastating weapon: the top secret “M Device”, an exploding shell containing a highly toxic gas called diphenylaminechloroarsine. The man in charge of developing it, Major General Charles Foulkes, called it “the most effective chemical weapon ever devised”.

Trials at Porton suggested that it was indeed a terrible new weapon. Uncontrollable vomiting, coughing up blood and instant, crippling fatigue were the most common reactions. The overall head of chemical warfare production, Sir Keith Price, was convinced its use would lead to the rapid collapse of the Bolshevik regime. “If you got home only once with the gas you would find no more Bolshies this side of Vologda.”The cabinet was hostile to the use of such weapons, much to Churchill’s irritation. He also wanted to use M Devices against the rebellious tribes of northern India. “I am strongly in favour of using poisoned gas against uncivilised tribes,” he declared in one secret memorandum. He criticised his colleagues for their “squeamishness”, declaring that “the objections of the India Office to the use of gas against natives are unreasonable. Gas is a more merciful weapon than [the] high explosive shell, and compels an enemy to accept a decision with less loss of life than any other agency of war.”

He ended his memo on a note of ill-placed black humour: “Why is it not fair for a British artilleryman to fire a shell which makes the said native sneeze?” he asked. “It is really too silly.”

A staggering 50,000 M Devices were shipped to Russia: British aerial attacks using them began on 27 August 1919, targeting the village of Emtsa, 120 miles south of Archangel. Bolshevik soldiers were seen fleeing in panic as the green chemical gas drifted towards them. Those caught inthe cloud vomited blood, then collapsed unconscious.

The attacks continued throughout September on many Bolshevik-held villages: Chunova, Vikhtova, Pocha, Chorga, Tavoigor and Zapolki. But the weapons proved less effective than Churchill had hoped, partly because of the damp autumn weather. By September, the attacks were halted then stopped. Two weeks later the remaining weapons were dumped in the White Sea. They remain on the seabed to this day in 40 fathoms of water.