The USA has always treated Iran as their colony. The full colonization of this proud country began in 1953 when the CIA engineered a military coup against the democratically elected Iranian head of state Mohammad Mosaddeq. He was a real patriot and wanted to nationalize the British and US oil companies that exploited recklessly his country.

Recent declassified CIA documents prove beyond any doubt the criminal activities of the CIA and the USA in organizing this bloody coup that threw Iran in chaos and transformed this ancient culture into an economic appendix under the hegemonic interests of the USA. This was achieved with the help of the American puppet Shah Mohammad Reza Pahlavi until the Islamic revolution ousted him from power and forced him to emigrate to the USA and later to move to Egypt due his infamy and unpopularity among the US citizens, where the secret US services killed him in an unnecessary operation as he knew too much about the US machinations in Iran.

This is the political background of the USA-Iranian relations which are intoxicated by the reckless policy of the Western superpower against this peaceful country that has not started any war in recent times, contrary to the USA, GB , Israel and NATO as Western military alliance, but was only compelled by invaders and aggressors to fight for its liberty.

Notwithstanding this fact, the current Islamic leaders of this country are the same rascals as those on power in the West. This fact highlights why all this scum must disappear for ever from this planet before it can ascend in light. 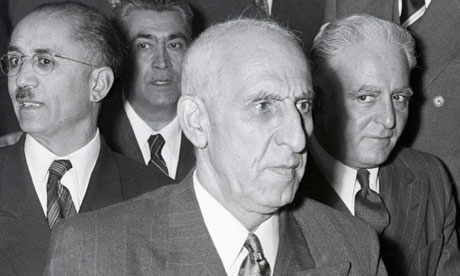 Mohammed Mosaddeq is described in one US document as ‘mercurial, maddening, adroit, and provocative’. Photograph: Bettmann/Corbis

The CIA has publicly admitted for the first time that it was behind the notorious 1953 coup against Iran‘s democratically elected prime minister Mohammad Mosaddeq, in documents that also show how the British government tried to block the release of information about its own involvement in his overthrow.

On the 60th anniversary of an event often invoked by Iranians as evidence of western meddling, the US national security archive at George Washington University published a series of declassified CIA documents.

“The military coup that overthrew Mosaddeq and his National Front cabinet was carried out under CIA direction as an act of US foreign policy, conceived and approved at the highest levels of government,” reads a previously excised section of an internal CIA history titled The Battle for Iran.

The documents, published on the archive’s website under freedom of information laws, describe in detail how the US – with British help – engineered the coup, codenamed TPAJAX by the CIA and Operation Boot by Britain’s MI6.

Britain, and in particular Sir Anthony Eden, the foreign secretary, regarded Mosaddeq as a serious threat to its strategic and economic interests after the Iranian leader nationalised the British Anglo-Iranian Oil Company, latterly known as BP. But the UK needed US support. The Eisenhower administration in Washington was easily persuaded.

British documents show how senior officials in the 1970s tried to stop Washington from releasing documents that would be “very embarrassing” to the UK.

Official papers in the UK remain secret, even though accounts of Britain’s role in the coup are widespread. In 2009 the former foreign secretary Jack Straw publicly referred to many British “interferences” in 20th-century Iranian affairs. On Monday the Foreign Office said it could neither confirm nor deny Britain’s involvement in the coup.

The previously classified US documents include telegrams from Kermit Roosevelt, the senior CIA officer on the ground in Iran during the coup. Others, including a draft in-house CIA history by Scott Kock titled Zendebad, Shah! (Viva, Shah!), say that according to Monty Woodhouse, MI6’s station chief in Tehran at the time, Britain needed US support for a coup. Eden agreed. “Woodhouse took his words as tantamount to permission to pursue the idea” with the US, Kock wrote.

Mosaddeq’s overthrow, still given as a reason for the Iranian mistrust of British and American politicians, consolidated the Shah’s rule for the next 26 years until the 1979 Islamic revolution. It was aimed at making sure the Iranian monarchy would safeguard the west’s oil interests in the country.

The archived CIA documents include a draft internal history of the coup titled “Campaign to install a pro-western government in Iran”, which defines the objective of the campaign as “through legal, or quasi-legal, methods to effect the fall of the Mosaddeq government; and to replace it with a pro-western government under the Shah’s leadership with Zahedi as its prime minister”.

One document describes Mosaddeq as one of the “most mercurial, maddening, adroit and provocative leaders with whom they [the US and Britain] had ever dealt”. The document says Mosaddeq “found the British evil, not incomprehensible” and “he and millions of Iranians believed that for centuries Britain had manipulated their country for British ends”. Another document refers to conducting a “war of nerves” against Mossadeq.

The Iranian-Armenian historian Ervand Abrahamian, author of The Coup: 1953, the CIA and the Roots of Modern US-Iranian Relations, said in a recent interview that the coup was designed “to get rid of a nationalist figure who insisted that oil should be nationalised”.

Some analysts argue that Mosaddeq failed to compromise with the west and the coup took place against the backdrop of communism fears in Iran. “My study of the documents proves to me that there was never really a fair compromise offered to Mosaddeq, what they wanted Mosaddeq to do is to give up oil nationalisation and if he’d given that of course then the national movement would have been meaningless,” he told the Iranian online publication, Tableau magazine.

“My argument is that there was never really a realistic threat of communism … discourse and the way justifying any act was to talk about communist danger, so it was something used for the public, especially the American and the British public.”

Despite the latest releases, a significant number of documents about the coup remain secret. Malcolm Byrne, deputy director of the national security archive, has called on the US intelligence authorities to release the remaining records and documents.

“There is no longer good reason to keep secrets about such a critical episode in our recent past. The basic facts are widely known to every school child in Iran,” he said. “Suppressing the details only distorts the history, and feeds into myth-making on all sides.”

In recent years Iranian politicians have sought to compare the dispute over the country’s nuclear activities to that of the oil nationalisation under Mosaddeq: supporters of the former president Mahmoud Ahmadinejad often invoke the coup.

US officials have previously expressed regret about the coup but have fallen short of issuing an official apology. The British government has never acknowledged its role.