by Chris Haslauer and Georgi Stankov, May 31, 2013
www.stankovuniversallaw.org

in Istanbul, Turkey a protest by conservationists was brutally crashed down today by using police force in an unimaginable scale. Perhaps you’ve already read it.

In the local online (German) newspapers, this event did not even come up on the first pages. The election promises / lies of our politicians seem to be more important. Even on television so far I could not find it.

May I ask you to draw attention to the situation on your site. Sure, your readers are sensitized to such insane events and probably well informed. Nevertheless, the images should be disseminated, at least not to be neglected. Since I do not have the ability to publish, I’m asking you.

I am responding with great pleasure to your request and will publish immediately on the clashes in Istanbul today, Friday, between the people and the brutal police of the authoritarian Turkish government of Erdogan.

This upheaval has however much deeper roots and was expected by us for some time. The same protests are now unfolding everywhere in Europe – in Frankfurt against the EU central bank, in Spain, Portugal, Greece and many other European countries as the demonstrations of more than 2 million people against the Orion company Monsanto GMO showed this week.

The source energies that are now flooding earth and humanity illuminate all dark spots on this planet, which has firmly moved into the 4th dimension, and humanity starts to realize for the first time the infinite insidious lies and deceptions to which they have been subjugated for centuries.

The summer of discontent has just commenced and will explode next month into a veritable wildfire that will wipe out the whole old Orion order. The whole system of governance, finance and capitalist rules will collapse like a house of cards. I have been expecting this moment for many years, having been a direct participant and witness of several revolutions in the past and in particular the sweeping liberation of Eastern Europe from the communist dictatorship after the fall of the Iron Curtain. That is why I was rather disappointed that I had to wait so long for this auspicious event – the beginning of the world revolution and the liberation of humanity from its perennial Orion/Reptilian enslavement. Now the “End Time of Change” has finally commenced exactly on time when our group, the PAT, is ready to ascend.

The German press has been the most restricted mainstream media in the last several years and has deliberately excluded all critical events, to which we have dedicated our attention in the past. Therefore, it is not at all surprising that they now also neglect the current brutal actions of the Turkish police in Istanbul because they now fear, as the devil the incense, the sparks of the impending World Revolution as the German finance minister recently admitted in an interview.

Below I will publish the latest article from Guardian that presents the case of the Turkish demonstrators and their spoiled relationship with the authoritarian regime of Erdogan, who has become rather arrogant in the last years as his prolonged reign since 2002 has not been seriously contested by the opposition. 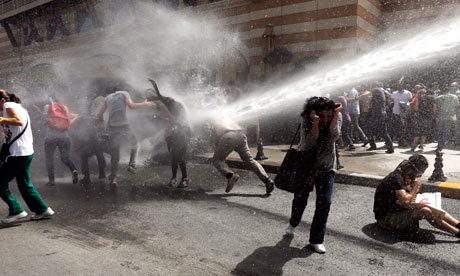 Following several days of dawn police raids on the protesters seeking to occupy a park on Taksim Square in the city centre, the clashes escalated violently on Friday, leaving more than 100 people injured, several of them seriously.

There was widespread criticism of the heavy-handed intervention and of the government of prime minister Recep Tayyip Erdoğan, who is committed to demolishing the park to erect a new shopping centre.

With the city centre metro closed and one of the busiest shopping and tourist areas of Istanbul groggy with tear gas, there were also warnings that the government’s overreaction to what began as an environmental protest could turn more political.

“They have declared war on us,” said a shopkeeper in a back street of the district, as he handed out lemon juice to protesters. “This is out of all proportion.”

Ugur Tanyeli, an architecture historian, said: “The real problem is not Taksim, and not the park, but the lack of any form of democratic decision-making process and the utter lack of consensus. We now have a prime minister who does whatever he wants.”

The protests started late on Monday after developers tore up trees to make way for the controversial construction project featuring a shopping centre in nostalgic Ottoman style and the duplication of an old military barracks previously sited there.

Police staged consecutive raids on protesters, using tear gas and water cannon, but the protests grew in scale, with the city’s artists, intellectuals and opposition MPs joining the ranks.

According to the Istanbul Medical Chamber, at least 100 people were injured during the police raids on Friday. Some sustained injuries when a wall they were trying to climb collapsed as they fled from the tear gas. At least seven people have been treated for head trauma.

Sirri Süreyya Önder, an MP from the Kurdish BDP party, was taken to hospital after he was reportedly hit in the shoulder by a tear gas cartridge.

Despite the dramatic images from the centre of one of the world’s great cities, the clashes attracted only scant attention from mainstream Turkish media and television, fuelling suspicion that the Erdoğan government was leaning on the media to ignore what some said had the potential to evolve into a serious challenge to the prime minister.

Amnesty International condemned the “use of excessive force” by police.

An MP from Erdoğan’s governing AK party angered the protesters, tweeting: “It looks like some people needed gas.” Sirin Ünal added: “If you go away, you will have a nice day. One has to obey the system.”

For many of the protesters, the park issue is the tip of the iceberg. Another mega building project, the construction of a new bridge spanning the Bosphorus, was launched this week, with Erdoğan dismissing public opinion.

“They can do whatever they want,” he said. “We’ve made our decision, and we will do as we have decided,” he said. He defended the reconstruction of the Ottoman barracks as a matter of “respecting history”. Opponents argue the project will destroy one of the last green spaces in central Istanbul for the sake of private profit.

“How can you show respect for something that does not exist?” asked Tanyeli. “We don’t even know what the barracks looked like exactly. To say that this project has anything to do with the reconstruction of a historical building is ridiculous.

“We all know how starved Istanbul is for green space. It needs this park so much more than yet another shopping mall.”

Several large retailers announced they would not open stores in the planned shopping centre. “I would not open a store in a place where blood has been shed,” businessman Selami Sari told the Turkish press.

The park protests show signs of escalating into demonstrations against a prime minister who remains popular and dominates national politics, but is seen as increasingly authoritarian.

“Turkey is not doing well, not doing well at all,” said Coskun Ince after several days protesting. “We have to fight for our rights, and now they deny us the few rights we still have.”

The protest was unusual in that it brought together young and old, the rightwing and leftists, and nationalist Turks and Kurds. They complained of issues beyond the planned shopping centre from government policy on the war in neighbouring Syria to new curbs on alcohol and a recent row about kissing in public.

“We are fed up,” said Cansu Kahvecioglu, a student. “They don’t give us any breathing space anymore. The Gezi park was just the last straw that broke the camel’s back.”

“Today is a turning point for the AKP,” said Koray Caliskan, a political scientist at Istanbul’s Bosphorus University. “Erdogan is a very confident and very authoritarian politician, and he doesn’t listen to anyone anymore. But he needs to understand that Turkey is no kingdom, and that he cannot rule Istanbul from Ankara all by himself.”